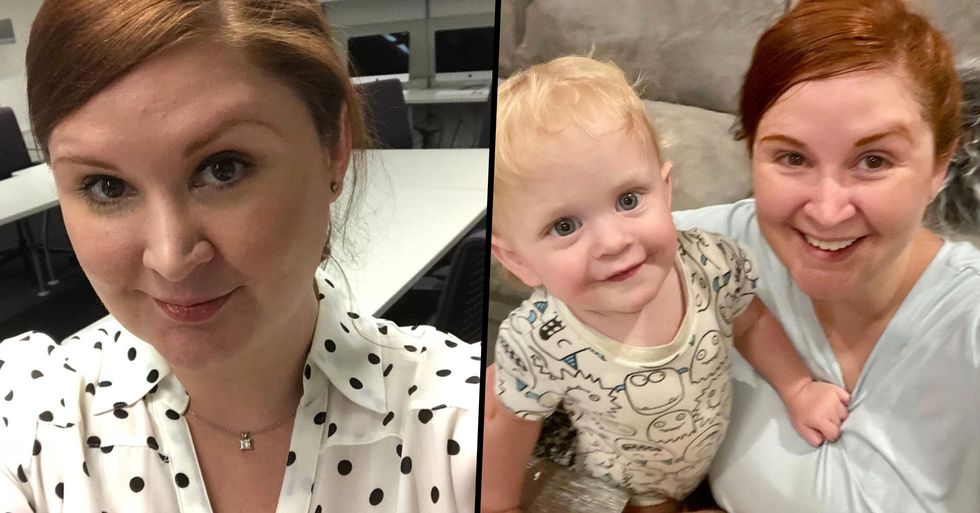 Best-selling author, Shanna Hogan, has sadly died at the age of thirty-eight... and her baby son was there to witness the whole thing.

This is utterly heartbreaking...

Shanna Hogan has tragically passed away.

She leaves behind her husband, Matt, and her fourteen-month-old son, Zander.

And in 2005, she graduated with a bachelor's degree in journalism from Arizona State University.

Her career began at the East Valley Tribune where she worked as a reporter.

In 2008, she went to work for the Times Media Group as a features editor, where in 2012 she was promoted to executive editor.

Shanna then moved on to non-fiction writing.

She has written 4 true-crime books, the first being Dancing with Death, which is about Phoenix housewife Marjorie Orbin and the death of her husband Jay, an art dealer in 2011.

It was followed by Picture Perfect: The Jodi Arias Story, released in September 2013.

She has appeared on Dateline NBC, ABC's 20/20, CNN's Anderson Cooper 360°, "Inside Edition," and Oxygen's "Snapped" to discuss high-profile crime cases...

Shanna has been happily married to her husband, Matt, for nearly twenty years...

And just over a year ago, their family of 2 became a family of 3.

Little Zander made an appearance fourteen months ago...

And there's no denying that they made for the cutest little family.

On September 1st, Shanna tragically passed away at the mere age of thirty-eight.

Since the news of her death broke, tributes have been flooding in for the writer...

if you knew @shannahogan you knew just how special she was. she was my professor the first semester I started at… https://t.co/mwjj8bOcFy
— heidi (@heidi)1599032975.0

And it's clear how much she is already being missed.

One of my favorite professors, Shanna Hogan, passed away today. Please send prayers to her family. She had an amazi… https://t.co/O0pHPWFRIW
— Jesse Morrison (@Jesse Morrison)1599025433.0

The last time I spoke to @shannahogan, she gave me advice on death and losing someone. She was truly someone that… https://t.co/WDGjjnXKRI
— Emmie Keenan (@Emmie Keenan)1599104341.0

The last time I spoke to @shannahogan, she gave me advice on death and losing someone. She was truly someone that… https://t.co/WDGjjnXKRI
— Emmie Keenan (@Emmie Keenan)1599104341.0

My heart breaks at the passing of my former @Cronkite_ASU professor @ShannaHogan. She was a fantastic professor, a… https://t.co/Ite1WFJQnD
— Alex Gaul (@Alex Gaul)1599026630.0

Heartbroken to hear about the passing of my news reporting professor @shannahogan yesterday morning. She was a phen… https://t.co/fwNdwjT7L2
— Gareth Kwok (@Gareth Kwok)1599078078.0

Shanna was the first teacher to ever give me the confidence in my writing and normalized my love for true crime. Pl… https://t.co/umvxB1jM9I
— Mackenzie Belley (@Mackenzie Belley)1598926561.0

The cause of her death is utterly devastating.

On August 27th, Shanna was playing in the pool with Zander when she slipped and hit her head, which caused her to submerge under the water. Shortly after her fall, husband Matt returned home to find their little boy safely sat outside the pool with his life vest on - but his wife was laid unconscious on the pool floor.

Matt immediately pulled Shanna out of the pool and performed CPR on her until the paramedics arrived...

She was then rushed to a local hospital, where she remained in the ICU in critical condition for several days, according to her friend and former colleague Kathleen "Katie" Mayer.

Her family decided to donate her organs, which Mayer says have already gone to save the lives of four people with possibly more in the future.

Shanna was taken way too soon.

"At a time where human kindness is so desperately needed, we've lost one of the people who gave that to our world, but Shanna's writing will live on, the lives she saved will live on and her greatest creation — her little boy — will live on to inspire all of us," Mayer said in an emotional statement.

And to "to support Zander as he grows up without a mother," according to the page.

Our deepest thoughts and condolences go out to her family.