The Best Subtle Ways You Can Screw With People | 22 Words 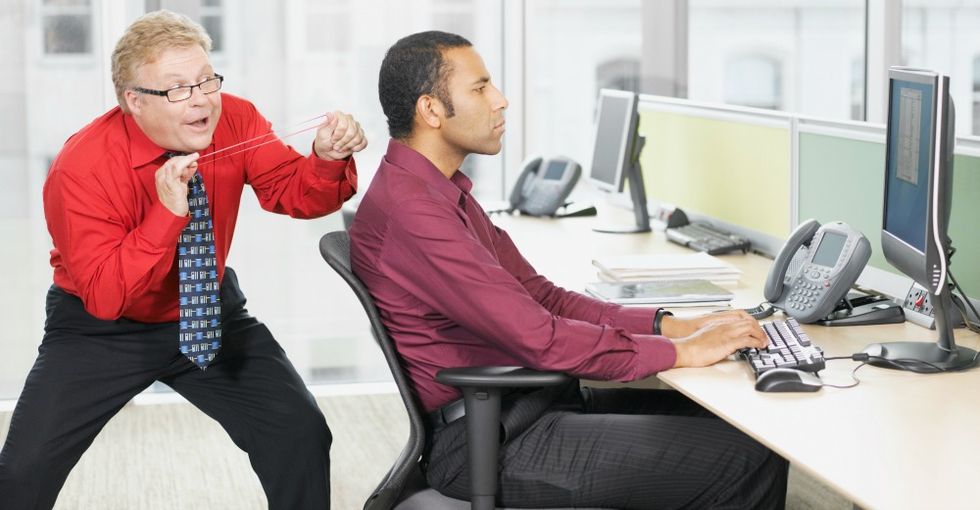 The Best Subtle Ways You Can Screw With People

Have you ever worked in the service industry? If you have, you know all too well just how annoying people can be. (And if you haven't, consider yourself very, very lucky.) They're either completely rude, horribly impatient, or, sometimes worst of all, infuriatingly dumb. So in order to get through the day, finding small ways to amuse yourself is key. In my case, it always involved messing with a customer's head that was so subtly done that it would leave them confused but too embarrassed to say anything about it. Just thinking about those days at the Dairy Queen gives me warm, fuzzy feelings.

The following people reveal all the different ways they subtly mess with strangers, co-workers, family members, and friends, and the results are totally hilarious and oh-so-satisfying. The last one is so brilliant it verges into Jim Halpert territory.

You might want to bookmark this page for future reference.

"As I'm saying goodbye to someone I like to say 'dick hair.'"

"If you say it fast enough it sounds like 'take care.' People usually pause for a split second and kind of get that look on their face like 'did I just hear him say dick hair?' It's great."-Elton3stars

"My mom was doing the toothpaste tube roll up thing and was amazed at how long the tube was lasting."

"What she didn't know was that my dad was constantly squeezing more toothpaste into it just to f*** with her. They are in their 70s."-jameson_water

"I plugged a wireless mouse into my coworker's computer."

"Once in a while, I'd give it a little wiggle from a few cubes away. He is sure management is watching his screen."-__helix__

"Take notes. This works brilliantly with angry customers, but even better with your boss."

"When you're faced with a meeting with your supervisor, especially one where they feel like they're in a power position, take a notepad with you and take notes of EVERYTHING they say.

Instantly ruins their power trip by making them question everything they say."-[deleted]

"When I'm in the car, I honk and wave at strangers."

"About 80% wave back, even though they have no idea who I am."-Dugsalvador

"When I'm ordering from a fast food place or a Starbucks, when they ask for my name, I'll respond with the name of the person taking my order regardless of gender."

"They'll usually kind of give you a sideways look of confusion, and I just continue making eye contact, dead serious.

It makes for a great response considering I'm a smaller Asian girl claiming my name is George."-[deleted]

"I asked a guy at work if he'd ever got 'that creepy déjà vu feeling'."

"A week later, I did it again."-Atheist_Simon_Haddad

"My co-worker has one of those framed postcard-sized motivational posters on his desk."

"I photocopied it one weekend while catching up on extra paperwork. I then photoshopped SpongeBob surfing into the background. Days went by and he never noticed, so I changed the quote as well. STILL didn't notice. Now I add one new thing each week. Everyone in the office knows and they all chuckle when near his desk. Visitors give him odd looks but he's so freaking oblivious. I can't wait to see how long I can stretch this out."-Pitbowl

"I worked at an ice cream shop when I was in high school."

"My wife used to play a couple of computer puzzle games, and was quite proud of beating my high scores."

"What she didn't realize was the high score table was a plain text file in the directory... so every time she beat my score, I edited the file to put myself on top again. She would play for days trying to top me."-theottomaddox

"The bathroom at work is outside the work area (only part of a floor), in a common area, and has one of those 12345 press button locks on it."

"I like to walk at the same speed as total strangers."

"One time in college I was walking home across campus after a night of drinking. This guy walking behind me eventually caught up to me and started to pass, but instead of letting him pass me, I sped up to keep pace. We walked next to each other without saying a word for the next 2 minutes. He then started slowing down, so I started slowing down. Then he sped up. So I sped up.

Then he finally turns to me and says "Are you ****ing with me?" I burst out laughing and said yes and let him walk the rest of the way home without me."-ItsAlexBalex

"A fun thing, when someone is walking behind you and you turn a corner, sprint as far as you can before they turn the corner."

"Then when they say, 'No, what time is it', I follow that up with, 'Probably'. You gotta sell it; it's gotta sound genuine. People get annoyed so fast."-JWoww91

"A couple of months ago I came upon a collection of what I could only describe as a crate's worth of AOL free trials from the '90s."

"I've started leaving them everywhere. DVD players, CD players, car radios, underneath couch cushions, inside wells, behind family portraits, books, as cupholders. All of these include inside my house, other people's houses, and stores.

If you ever go to Disneyland and look inside any body of water and see a disc, chances are that both I've been there and that it's AOL."-invertedLblock

"I frequently install Cloud2Butt on anyone's computer that is using chrome."

"It changes every word in Chrome that says 'cloud' to 'butt'. So the Google drive now suggests you save your files 'in your butt.'"-ncage64

"At parties, I like to introduce myself as my boyfriend's sister and then kiss him in front of whoever I introduced myself to."

"It has to be a peck on the lips but drawn out just enough to gross them out. It's become a really awful inside joke. He's a good sport about it, though. Once he wrapped his arms around me as I was talking to one of his ex-coworkers and whispered, 'Did you text mom?'"-uglyhag

"I look over people's shoulders when they're unlocking their phone so I can see their four-digit code."

"Then I pretend I'm making a phone call and VERY LOUDLY use their number in my fake conversation.

It's so much fun to see their neck snap back with this 'whatthef***' look, and then watch them mentally process the depth of such a remarkable coincidence. It's even more fun to do it with people you don't really like."-CuntyMcGiggles

"This is how my daughter subtly fucked with me:"

"She'd leave little pieces of balled-up or folded paper around the house that said 'Made you look' on the inside."-Recidiva

"I sell cameras in a high-end store."

"I try to always use the worst comparisons possible when a client asks me to compare two models...'Well, the Olympus E-M1 is like an all-dressed pizza and the Fuji XT-1 is like a screwdriver, you see?'

My new favorite is guaranteeing things that are obvious. Gluten-free cameras, no preserving agents in a bag, etc."-arnaudfr

"Put life savers hard candy inside the showerhead of the person you want to f*** with."

"When they shower it's all normal. When they try to dry off they feel slightly sticky. They will jump back in to rinse off and feel normal again until they dry off again sticky. It's maddening!"-Ebriate

"I can tell when someone needs to merge into my lane."

"I'll intentionally not let them over until they turn on their blinker.

I'm trying to Pavlov's Dog everyone, one driver at a time."-GuardianOfTriangles

"When someone I don't like is being sexist/racist/gossiping, I just pretend not to understand what they mean and keep asking questions and making them explain what they're saying, until they get so uncomfortable they have to stop."

"Say 'no pun intended' occasionally after saying something normal in conversation."

"Most people don't want to look stupid and will laugh awkwardly while trying to figure out what the pun was."-[deleted]

"I have a washer bottle nozzle on the rear of my car that has been modified to shoot a jet of washer fluid quite a distance."

"It's pretty effective for getting tailgating a**holes to f*** off."-Jonny_EP3

"I do redneck voices at the drive-through intercom, and then speak proper English when I drive around to the pickup window."

"Pretty sure this was a big factor in my ex breaking up with me."-cowboys30

"I subtly mess with people every day without even trying."-The_God_Father

"While in college during frat parties I'd subtly tap shoulders and make people turn into each other to see what happened. I've started a few fights and encouraged a few hookups. I've only been caught twice."-bronxbmbr

"I work in a coffee shop. Our shop is very well educated and many are pursuing masters degrees."

"When a customer talks down to one of them I will loudly agree with the customer, 'YEAH, IDIOT!' Often the customer will begin to change their tone and my fellow employees try to keep from laughing."-saintplasticcups

"My husband did this to a co-worker."

"He found one of those greeting cards that made a cricket sound when you opened it. He took out the chip and attached it to the inside of his co-worker's drawer so that every time the co-worker opened the drawer, he would hear a cricket. The sound would stop when he closed the drawer.

The co-worker spent enormous amounts of time looking for the damned cricket."-[deleted]