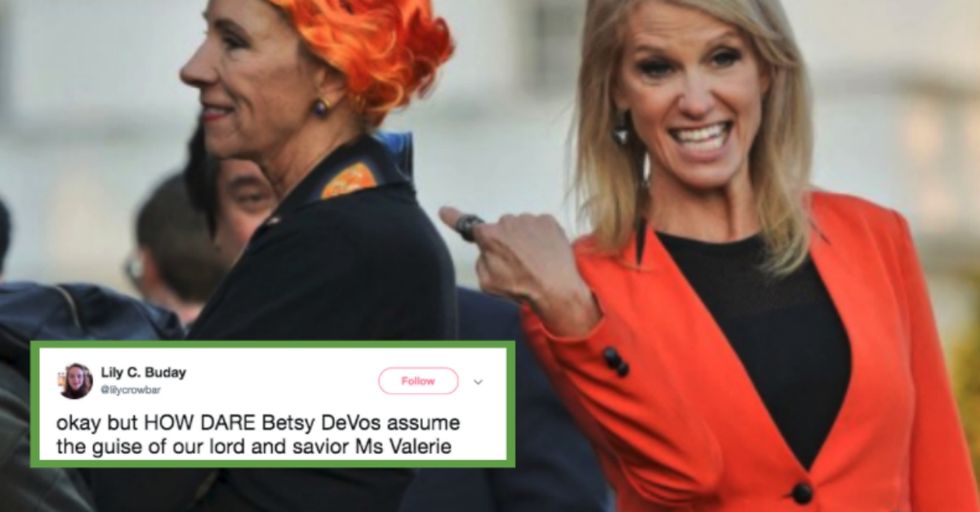 Pack up, everybody. The "Scariest Halloween Costume of 2017" contest is over. The current U.S. Secretary of Education Betsy DeVos won it handily.

Did she go as a zombie or a vampire? Or a zombie vampire? No.

Did she dress up as one of her horrifying policies? Nope.

She did something even worse. She dressed up as one of your childhood heroes.

To celebrate Halloween, Betsy DeVos dressed up as Ms. Frizzle.

The hair. The dress. The whole thing. This is bad, people. Even Kellyanne Conway seems to realize it's bad in this picture.

In case you've managed to forget the wonderful character of Ms. Frizzle (or maybe you've just blocked your happiest memories in light of how bad thing seem right now), we'll remind you:

Ms. Frizzle was the teacher from the show The Magic School Bus (the original version; not the Netflix remake). She took her students on amazing field trips like into outer space or into the human body. She had a pet lizard. She had amazing style. She constantly told her students to "Take chances, make mistakes, and get messy!"

To put it bluntly, Betsy DeVos is nothing like Ms. Frizzle.

Except for the "make mistakes" part. She's done plenty of that. While Ms. Frizzle taught everyone, DeVos seems to be of the mindset that the richest kids are the ones who deserve the best education. DeVos also recently moved to repeal campus rape protections. Ms. Frizzle would not have done that. We never saw much of Ms. Frizzle's house in the show, but we're guessing it was not a gigantic behemoth of architectural failure like Ms. Devos' home. As far as we can tell, the biggest similarity between Ms. Frizzle and Ms. DeVos is the "Ms."

As this Twitter user (not the real Jill Biden) points out, Betsy DeVos isn't even really fit to dress up as the worst character from The Magic School Bus.

Sorry, Arnold. Ain't nothing normal about this field trip we refer to as "Life under the Trump administration."
20%

$22.44 $17.95
Buy Now
See More Deals
We hope you find these deals as awesome as we do! Just an FYI: we may receive a share of sales from links on this page