Betty White, Surrounded by Hunks on Her 96th Birthday, Is Everything We Want to Be | 22 Words 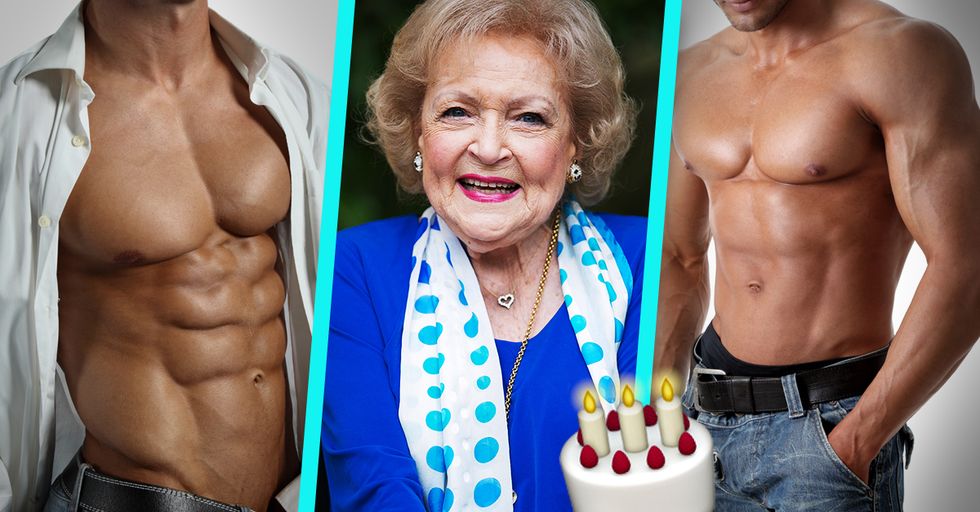 Betty White, Surrounded by Hunks on Her 96th Birthday, Is Everything We Want to Be

Betty White is having the best birthday ever. The beloved and outspoken actress turned 96 on Wednesday, and she had one wish for her big birthday – Robert Redford! White has had a crush on the Oscar-winning actor-director for years, and has always wanted to collaborate with him.

"But it never works. I try every year," White said to Parade.

Sadly, White didn't get her wish this year – not that she would have known what to do if she had.  "If I ever did meet him I'd be so embarrassed," she said.

Ryan Reynolds, for instance, sent her a cheeky tweet referencing her secrets to living a long, and happy life, which include "positive, optimistic thinking… and vodka and hotdogs, 'probably in that order.' "

Reynolds and White have been friends for years since he played her onscreen grandson in the 2009 comedy The Proposal.
Other people sent her birthday messages, did tributes, cards, you name it. After all, she's Betty White. With more than 75 years in the acting game, she has the longest television career of any female performer in history. One blogger even did a birthday tribute of Betty White with shirtless hunks. Here are some more hunks as we go over the life and times of our beloved Betty White.

White and her family moved to California when she was young, and she tried to make it in Hollywood in her early 20s to no avail. Movie studios consistently turned her down because she was "unphotogenic."
White wasn't deterred, however. "You just keep plugging away," she says. "You don’t give up."
Then came the breakthroughs. She first started on the live TV variety show Hollywood on Television and afterwards began starring in the sitcom Life With Elizabeth, which focuses on an ordinary suburban couple and their predicaments.
Ever since, White has become a Hollywood mainstay and a living legend. Everyone loved her as ditzy Rose Nylund in the Golden Girls, and she has had many roles afterwards.
What else can we say except happy belated birthday to you, Betty White. May your days be filled with shirtless hunks, snakes, and the finest champagne money can buy.
From Your Site Articles