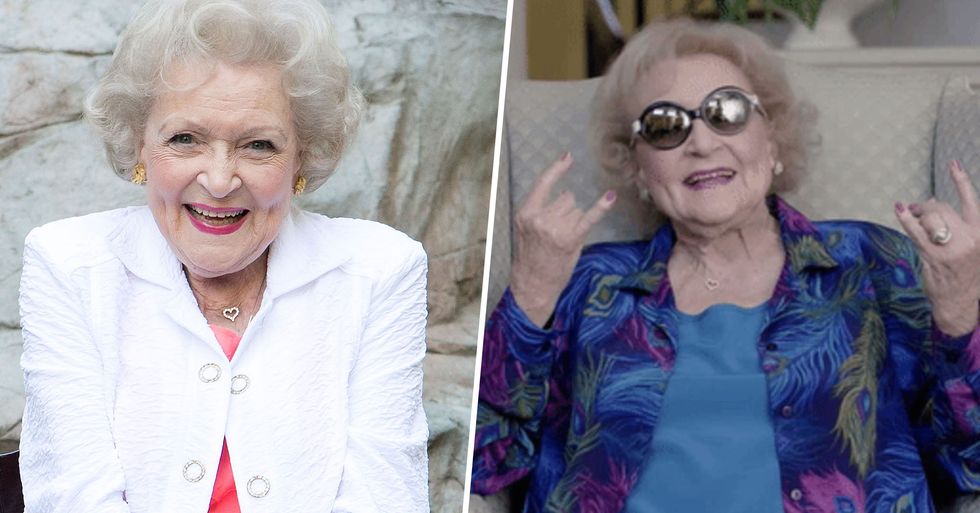 National treasure, Betty White, has been at the center of concern for fans during the pandemic - with many worried about her health.

Now, the star has released a statement and people can't get enough. Keep scrolling to see what she had to say, including how she's keeping occupied...

We all know Betty White from one beloved sitcom...

The Golden Girls, of course!

But of course, her career began decades before her Golden Girls stardom...

In fact, it stretches way back into the '30s.

Betty White began her television career in the late 1930s.

The star was born on January 17, 1922, in Oak Park, Illinois, before moving to LA aged 2. It was here where she began working as an assistant at a local television station.

In the early 1950s, she launched her first television series...

She developed the show, titled Life with Elizabeth with George Tibbles.

The show made White one of the first women producers in Hollywood...

"He wrote and I produced," White explained to The Hollywood Reporter. "I was one of the first women producers in Hollywood."

The show's entire premise came from a sketch White had done previously on local television.

But it wasn't until The Mary Tyler Moore Show that White's TV career got a huge boost.

The actress starred as Sue Ann Nivens, the co-worker to the show's star, Mary Tyler Moore, in a Minneapolis television newsroom. Sue Ann was known for cracking funny, yet poignant, quips at Moore's expense.

And it seemed her hard work paid off...

Because she won 2 Emmy's for her work on the hit series!

As the '80s rolled around, White took on a role that was a sharp contrast from Sue Ann...

White played the sweet Rose Nylund on the popular sitcom The Golden Girls, along with co-stars Rue McClanahan, Bea Arthur, and Estelle Getty.

The show chronicled the lives of 4, elderly, female friends.

And to say it was a smash hit is an understatement. The series landed among the top-ranked shows during its 7 seasons on air and bagged several coveted awards.

Sadly, in 1992 we waved a reluctant goodbye to the Golden Girls...

White enjoyed a steady television career, until 2010 that is... where once again her wit saw her launch back into the spotlight.

We all remember that candy bar ad during the 2010 Super Bowl, right?

Well, it quickly became a fan favorite and spurred White on to become the oldest person to host Saturday Night Live.

She was reluctant to do the show at first...

"It was the scariest thing I've ever done. It was really funny stuff, but it was a challenge," she revealed to Newsweek.

She landed a role on the sitcom Hot in Cleveland, alongside stars Valerie Bertinelli, Jane Leeves, and Wendie Malick. At first, she only signed on for the pilot, but she later joined the cast permanently. "It's just a terrific show. The chemistry between the girls is so great," she told Newsweek at the time.

And she's made it clear she isn't going to be giving up acting anytime soon.

And there's one big reason for this...

...her charity work. The star is extremely passionate about animals and has worked with the Los Angeles Zoo as well as the Morris Animal Foundation for more than 4 decades. She previously revealed to the Hollywood Reporter: "I have to keep acting so that I can afford to keep doing my charity work!"

As well as being a beloved actress and activist...

It's not hard to see why so many people love her.

She's such a mood.

Amid the pandemic, many fans have been concerned about the ninety-eight-year-old's health.

So, this week the star decided to put fan's minds at ease after concerns were expressed.

And, well, it turns out she's well and truly thriving.

White released a statement via her publicist.

In a statement to Today, White's rep said that "no one is permitted in [to her home] except those who must," adding that she has "helpers who are great with her."

"Betty has [a] beautiful backyard with a number of wild animals visiting. 2 ducks always come by to say hello. They waddle up to her glass door and look in." Okay, now that's cute.

Meanwhile one of her pals Tom Sullivan revealed to Closer magazine that she is passing the time with crossword puzzles and reading the Los Angeles Times.

"She owns literally thousands of crossword puzzle books and is constantly doing them to keep her mind jumping. This is really serious with her," he said.  "Betty loves to joke that vodka keeps her young. She loves the image of her sitting at home in a rocking chair, drinking a martini, and watching game shows, but she's not really a big drinker. That's not her. She'll only take a few sips of a cocktail if the occasion calls for it," another friend told the publication.

We love you, Betty!