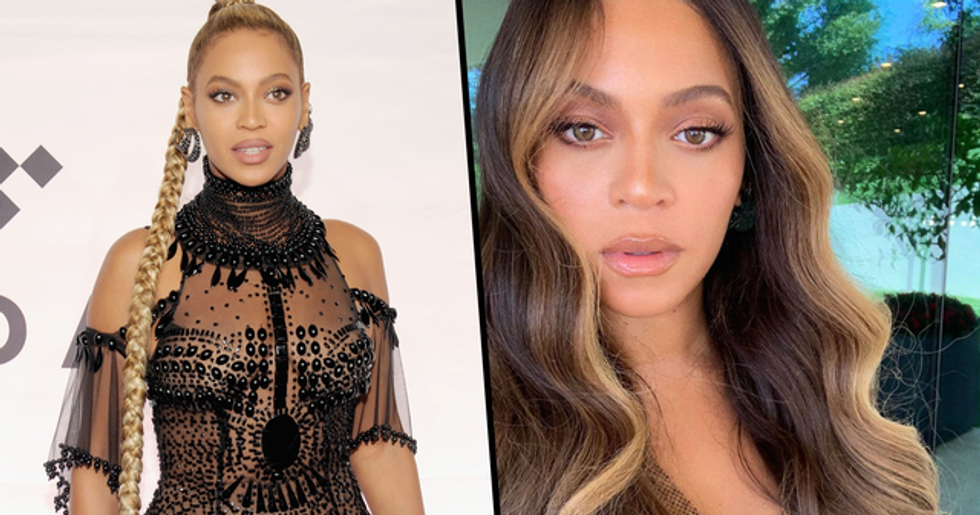 It's hard to believe that someone as radiant, beautiful, and god damned perfect as Beyonce has her own share of online haters and trolls, isn't it?

Well, it's true - Even Queen B has to put up with abusive and hateful comments about her appearance online. But, Bey being Bey, the singer simply isn't putting up with it.

In a recent interview with Elle magazine, the pop icon opened up about how she feels about some of the negative attention she receives, and she had the best response to anyone who has made comments about both her weight and general appearance.

Though the group didn't officially go their separate ways until 2006...

But they still remain friends, with both Kelly Rowland and Michelle Williams making a rare appearance to sing with Beyoncé at her acclaimed 2018 "Homecoming" Coachella performance, serving the crowd their long-awaited '90s nostalgia fix.

Over a decade since Destiny's Child parted ways, the pop powerhouse has well and truly taken center stage in the music industry - releasing 7 solo albums that have all gone down pretty well, to say the least. But her relationship and marriage to the acclaimed rapper, Jay Z, has also taken the spotlight. The power couple, who share 3 children together, got married in 2008 and, much to fans' delight, recorded a highly-anticipated joint album together called "Everything is Love" last year.

But, behind all the fame and the glamor...

Beyonce is just a regular woman and, most importantly, a regular mom.

So, of course, her appearance has changed in the last couple of years - She is only human, after all!

This simply isn't good enough. Beyonce has had a fair share of trolls who have targeted her for her changing appearance after birthing her 3 children.

Many even have the audacity to call her out for putting on weight...

A woman, putting on weight after giving birth to children?! How shocking!

But now, the singer has opened up about her thoughts on these trolls...

And her response was amazing.

Beyonce recently featured on the cover of UK Elle...

And the photoshoot that came with it alone was simply incredible, featuring the singer in grittily regular locations such as a grocery store, hair salon, and laundromat.

But it wasn't just the unusual photoshoot that was getting people excited.

For the first time, her fans were able to play the role of interviewer as the pop icon answered questions submitted by regular members of the public.

Including queries about her fashion line, her views on women in the media, whether she ever visits regular grocery stores, and her general self-care routine.

The topic of internet trolls and online hate came up.

Bey was asked about how comments on her changing appearance made her feel...

And her answer surprised everyone. "If someone told me 15 years ago that my body would go through so many changes and fluctuations, and that I would feel more womanly and secure with my curves, I would not have believed them."

She opened up about learning to value herself beyond her appearance...

"But children and maturity have taught me to value myself beyond my physical appearance and really understand that I am more than enough no matter what stage I’m at in life."

She has no time for hateful comments...

And she shared her trick to living a happy life alongside the haters... "Giving zero ****s is the most liberating place to be. Also knowing true beauty is something you cannot see. I wish more people focused on discovering the beauty within themselves rather than critiquing other folks’ grills."

She was incredibly candid throughout the full interview.

And, when asked if negative comments affect her, Bey replied: "Yes, I’m human. In moments of vulnerability, I try to remind myself I’m strong and I’m built for this. Thank God most of the noise bounces off of me after all of these years"

And, when touching upon motherhood as a whole...

Bey revealed that spending time with her family is the most important thing of all. "Making sure I am present for my kids – dropping Blue off at school, taking Rumi and Sir to their activities, making time for date nights with my husband and being home in time to have dinner with my family..."

Bey is saving the clothes that she doesn't donate to charity for her daughters. "And I save my special pieces for my daughters! I give my daughter my custom dresses, so she gon’ be litty. Vintage pieces by the time she hit the city, yeah-ah!!" Perks of being the Queen B's daughter, right? For more on Beyonce, keep scrolling to see what her natural hair looks like... The results will leave you completely shocked!