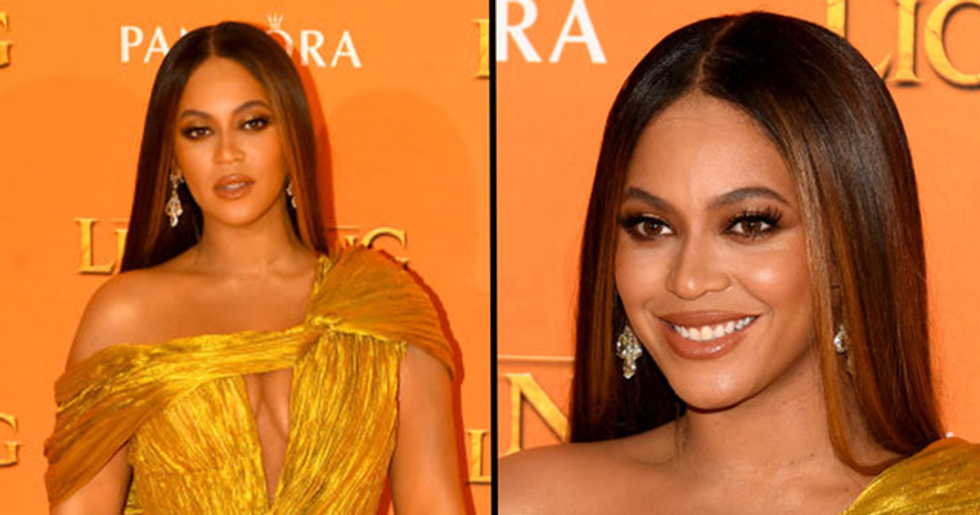 There are some celebrities that just seem to perfectly walk the line between privacy and fan service - and no one does it more skilfully than Beyonce. From her origins in legendary R&B outfit, Destiny's Child, to her ingeniously elusive relationship with Jay-Z, she manages to give us just enough to always keep fans wanting more.

For a while, she's been a little off the celebrity news radar - but her casting as the voice of Nala in the upcoming live-action The Lion King remake has put her firmly back in the spotlight. In fact, just last week, fans saw her first red-carpet appearance in a whopping three years, at the Los Angeles premiere. And, determined not to fade from view anytime soon, Bey managed to upstage herself at the London premiere by going for a very risque outfit.

Born in Houston, Texas, in 1971, Beyonce is truly a living legend.

She first rose to fame in iconic '90s R&B girl group, Destiny's Child, alongside Kelly Rowland and Michelle Williams - providing, for many of us, a soundtrack to our youths.

The group had a myriad of huge hits.

All three are undeniably talented.

But there was really only one breakout star of the group. Beyonce decided to launch her solo career in 2002, with her first incredible single "Crazy In Love," featuring future-husband, Jay-Z.

Destiny's Child sometimes still get back together.

They didn't officially break up until 2006, and clearly remain on good terms, reuniting from time to time, blowing the internet away with every flawless performance.

Beyonce is nothing short of a queen.

She's managed to build an empire for herself and for her family through the virtue of incredible hard work and super-smart creative choices. And she doesn't look to be stopping any time soon.

Beyonce is also part of one of the most insane power couples out there.

Though their relationship hasn't always been plain sailing.

In April 2016, Beyonce dropped her visual album, Lemonade, which was filled with lyrics alluding to Jay-Z having been unfaithful to the star. However, the fact that it was dropped on Jay-Z's record label led many to wonder if it was more of a publicity stunt than anything else.

Beyonce is primarily known as a singer.

But it's worth recognizing just how multitalented the star is. She's also a dancer and an actress, starring in the 2006 movie, Dreamgirls, which told the story of the iconic girl group, The Supremes.

And it seems to have only wet her appetite.

As it was recently announced that Bey would be lending her iconic voice to the live-action remake of The Lion King. She was cast as the female lead and romantic interest, Nala, in what promises to be a huge blockbuster.

Alongside this release comes new Beyonce music, which will be released alongside the movie. There's a full curated album to go alongside the film, plus a new single from Bey called "Spirit."

The cast is star-studded.

The Dolby Theatre in Los Angeles hosted the star-studded cast - but, honestly, there was only one woman that everyone wanted to see.

Bey has been fairly absent from red carpet events of late.

In fact, she was last seen strolling down the carpet three years ago. But no one was disappointed with her appearance, and it's clear that it was well worth the wait. She looked amazing.

She shared more up-close images of her look on Insta.

The unusual gown was Alexander McQueen, and was intricately embellished with a ton of crystals. The fact that it looked like an incredibly fancy tuxedo jacket kept her looking super cool, too.

Instead of opting to take her hubby as her date, Beyonce chose to bring her daughter, Blue Ivy, as her plus one. And the pair looked incredible in their matching 'fits. But if you thought that she couldn't top this look, well, you'd be very wrong indeed.

But what makes it more exciting? The fact that this movie means that we're going to be seeing a whole lot more of Beyonce on the red carpet in the coming months. And her look for the London premiere has blown everyone away.

It was designed by Cong Tri and featured luxe and decadent pleats and a stunning, draped finish. But there was one aspect of the dress that really got people talking.

You can first see Bey looking radiant in her beautiful outfit. But then she makes a turn as we see that it's a little more risque than you may have first assumed.

We're no stranger to a celeb rocking up to an event wearing an outfit that reveals pretty much a whole leg. But this slit may well be the highest one we've ever seen.

And, needless to say, the internet lapped it up.

If you ever need to know my most unattainable goal in life it’s for Beyoncé one day to look at me like this https://t.co/XiyriuWdAJ
— alanna (@alanna)1563149163.0

If these are the two outfits that we've seen so far as Beyonce promotes The Lion King, we think we've got a lot more to look forward to. Whatever she wears next, we're pretty sure it'll be #flawless. How do you think Bey's dress compares with other risque dresses that we've seen celebs don in the past? Keep scrolling for a list of sixty super revealing dresses that we've spotted ladies (and men!) sporting in recent years.