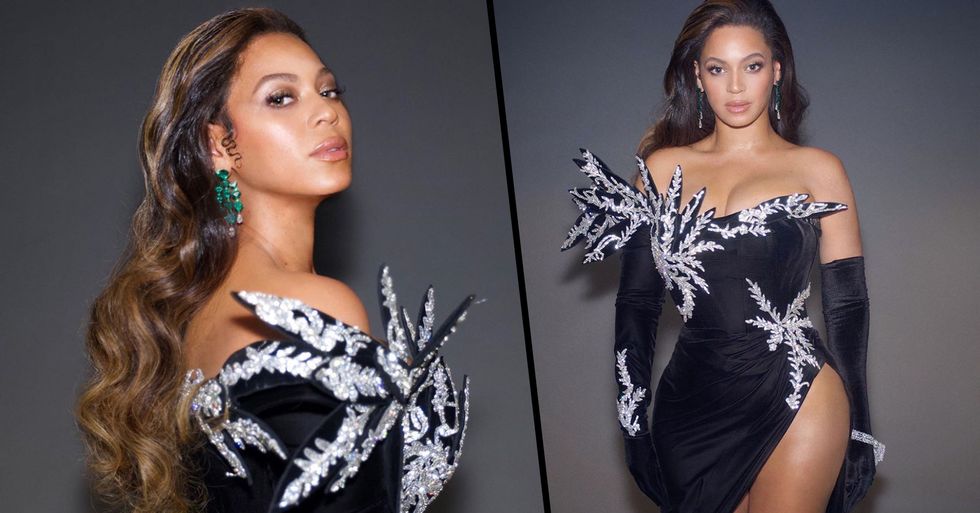 P Diddy's 50th birthday bash saw the rise and fall of the most glamorous. With A-List celebrity guests kitted out in their fanciest gear, you'd be crazy not to have a sneak-peak at the latest beauty trends in Diddy's Beverly Hills mansion.

Even though we saw some stunning contenders, there was only one woman who stole the show. Obviously, it was none other than the queen herself, Beyonce.

Keep scrolling to see the dress that left the other guests in awe...

P Diddy's 50th birthday was the talk of the town...

Despite his birthday being in November, Diddy celebrated his big five-O on Saturday night.

The glitzy bash featured some of our favorite A-Lister's...

Guests included celebrity couples such as Cardi B and Offset, Kim Kardashian and Kanye West and of course, the top of the royal food chain, Beyonce and Jay Z.

And obviously, they all made an effort to doll themselves up...

Here are some of our favorite looks of the night including the stunning, velvet gown that Beyonce wore with a leg slit all the way to her hip. Only a bad b*tch could ever rock something like that.

I see those red bottoms on Jay Z, and yes, they look great, but P Diddy definitely wins this one. That blazer is just to die for.

Boseman really won some extra brownie points for that bowtie.

We love a little bit of sparkle and Lizzo really brought that extra bit of glamour to the event. And that bold lip is to die for! We stan a confident queen.

Come through with that cigar, Ush! I don't think I could ever name a time when he looked bad... Nope, he has never.

Look at this woman. Just look at her. This stunning evening gown suited her perfectly. Forty-eight never looked so good!

It's all about a pop of color with Smith's look. He really pulls off that sky blue necktie, bringing a fresher feel to a classic look.

Cardi is known for her outrageous looks, but for Diddy's birthday bash, she stripped it back with this puffy ensemble. The low cut front brings an extra bit off sass to the outfit and with Offset on her arm, the couple really brought the glam factor back.

Come through, Snoop! Look at that fur collar. This man really knows how to steal the limelight. While most of the men were dressed in a classic tux look, Snoop was kitted from head to toe in this grey two-piece. Wow.

These 2 really gave Beyonce and Jay Z a run for their money on Saturday night but they just missed out on the top spot there.

While most of the women dressed in black...

Kim opted for a stunning gold, off-the-shoulder number. This timeless look stole the hearts of everyone everywhere.

However, it didn't last long...

The general consensus stated that she looked great, but the rest of the internet quickly got hold of the details about her "wedding dress". And when they found out how much it had cost her, they were left reeling in anger.

At a whopping $9300, this dress would leave more than a dent in anyone's pocket.

A Vivienne Westwood dress doesn't come cheap, but for one night, paying such a hefty amount might be pushing the boat a little too far. But hey, I guess P Diddy was worth it.

And now onto the number 1 spot. Beyonce turned up to the party ready to snatch wigs and that's exactly what she did. She, along with Jay Z, really showed the other guests why they are at the top of the celebrity food chain.

Though there were also some mixed reactions about her dress, she really worked with what she had.

Some people claimed that her stylists needed firing as they always dress her in something a little too risky. But who else is going to pull off a risky look if it isn't Queen B?

Look at how she works it!

And it only gets better with the next shot.

Whoever took these shots of Queen B really needs a raise...

Beyonce uploaded these snapshots to her Instagram last night and has since racked up over four million likes.

The internet has been debating on if they think Beyonce or Kim Kardashian won this battle...

For me personally, Beyonce snagged this one. But one thing's for sure, both women are 2 of the most powerful and successful women in the world, so put a bit of respect on their names when you talk about them. They both win in life. And if you want to see another iconic dress Beyonce rocked on the red carpet, then keep scrolling.