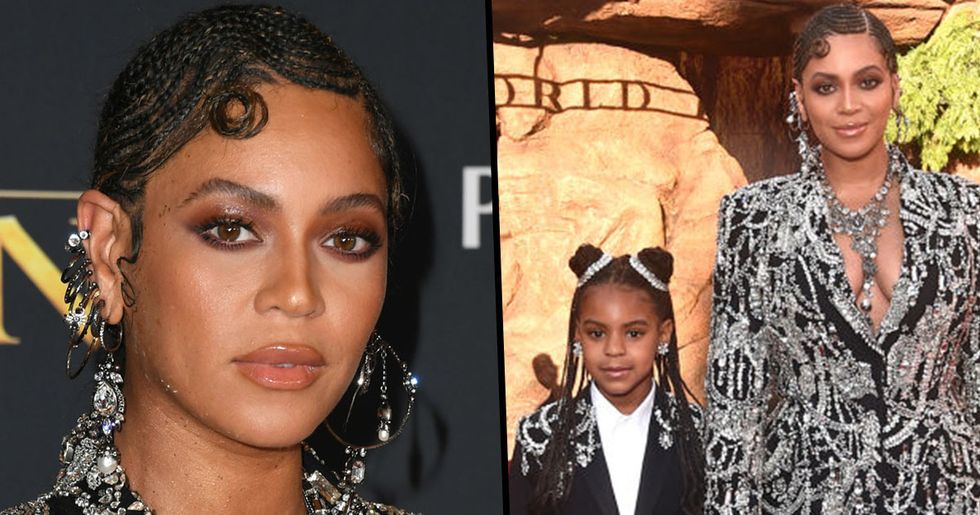 Whether it's the Met Gala or the Oscars, there's always that one star you are specifically looking out for, desperately waiting to see which ensemble they'll be sporting and which designer won the battle in dressing them. Beyoncé is certainly one of those stars. Fans, paps, and journalists alike seem to always have an eye out for the singing sensation, but, much to our disappointment, the songstress has pretty much ghosted all red carpet events over the last 3 years, leaving a gigantic Queen B shaped hole in our hearts.

However, just as we were coming to terms with her red-carpet hiatus, Beyoncé had fans all over the world rejoicing yesterday as she walked her first red carpet in nearly 3 long years.

Keep reading to find out what people had to say about her rare appearance because it looks like they're all pretty much saying exactly the same thing...

However, the group didn't officially go their separate ways until 2006.

But they still remain friends, with both Kelly Rowland and Michelle Williams making a rare appearance to sing with Beyoncé at her acclaimed 2018 "Homecoming" Coachella performance, serving the crowd their long-awaited '00s nostalgia fix. Of course, we all love to see our favorite stars reunited, but the best thing about this particular performance? The accompanying "Homecoming" film detailing both the show and behind-the-scenes is available on Netflix for fans to enjoy.

Over a decade since Destiny's Child parted ways, the pop powerhouse has well and truly taken center stage in the music industry - releasing 7 solo albums that have all gone down pretty well, to say the least. But her relationship and marriage to acclaimed rapper, Jay Z, has also taken the spotlight. The power couple, who share 3 children together, got married in 2008 and, much to fans' delight, recorded a highly-anticipated joint album together called "Everything is Love" last year.

Now that the songstress has broken the music industry, it seems like she's trying her hand at acting.

The thirty-seven-year-old is set to join the Disney community, lending her voice to the Hollywood studio for its upcoming live-action reboot of The Lion King, which comes to theatres on July 19. For those who haven't seen the original 1994 film, it centers around Simba, who, after his father, King Mufasa, is killed, becomes heir to Pride Rock. But, Simba is exiled, so he has to figure out how to take back what is rightfully his, with the help of a few quirky pals along the way.

The star is voicing Nala in the long-anticipated movie.

The lioness, who befriends Simba when they are young, eventually becomes his Queen in the animated classic.

Queen B is even releasing a Lion King-themed single for the movie.

As well as songs from the original 1994 classic, including "I Just Can't Wait to be King," "The Circle of Life," and "Hakuna Matata," fans can look forward to new music for the movie's soundtrack. Let's be honest, if it's Beyoncé, we know we'll love it...

Fans are pretty excited for the movie to hit the big screen.

The countdown is well and truly on for its release.

And with the release date fast approaching, the movie officially had its red-carpet premiere this week.

The cast, along with a whole host of celebs, walked the red carpet of the Dolby Theatre in Los Angeles in all their glory ahead of the movie's official box office debut. Singing and acting duo, Chloe and Halle Bailey, and pals of Bey herself were amongst the A-listers who walked the red carpet. Halle is also set to Join the Disney community, starring as Ariel in the live-action The Little Mermaid remake.

Understandably, however, people were holding out for a red carpet appearance from Queen Bey.

Everyone was wondering whether or not the star would break her red-carpet hiatus.

The superstar shocked fans by walking the red carpet for the first time in nearly 3 years to celebrate the upcoming release of the movie.

The songstress gave us an even better look at the show-stopping ensemble.

The star showed off her look on her Instagram today.

She also had the cutest date to accompany her down the red carpet (and no, it wasn't hubby, Jay Z).

The star's 7-year-old daughter, Blue Ivy, accompanied her mom to the premiere.

Think it couldn't get any cuter? The pair were donning matching outfits!

Bey was also joined by some familiar faces from the past.

The star's fellow Destiny's Child bandmates joined her in support of her Disney venture. We don't know about you, but we just love seeing the trio reunited again.

After the star stepped out onto the red carpet, the internet went into a Queen B-related frenzy.

Everyone was pretty much saying the same thing about the star.

Fans were starstruck by the superstar's look.

Queen B appears to be continuing her reign, as fans were delighted by her fashion triumph.

This fan was certainly shellshocked by Bey's red carpet ensemble. "Beyoncé proved yet again that she's the greatest living entertainer and the vocalist in the universe Knowles-Carter. the power. omg. we stan so hard," they wrote.

Others are patiently waiting for the songstress' Oscar nomination.

Seeing as the star is releasing the single, "Spirit," for the movie's soundtrack, it will probably only be a matter of time before we see the single nominated for awards. "If you don't stan Beyoncé now..... I don't want anything to do with you," one user wrote. They added: "An Oscar nomination is incoming."

Although others couldn't help but make a joke at the star's usual absence from red carpet events.

It seems that being graced by her presence was enough on its own, as Bey refrained from stopping for interviews on the red carpet.

But, overall, fans were elated with her rare red carpet appearance.

Her mini-me received a huge amount of praise, too.

Luckily, we can look forward to even more Queen B on the red carpet this weekend.

The superstar will be crossing the Atlantic on Sunday to attend the Lion King premiere in London. We can't wait to see what look she'll serve this time.