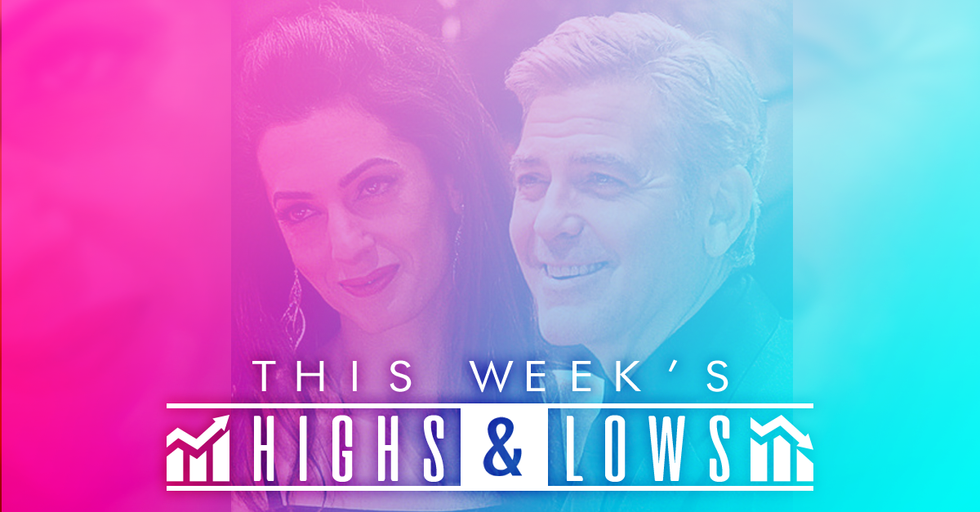 Goodness gracious, great balls of celebrity gossip! This has truly been a week for the record books! But we've got a feeling SOME people will be wanting to remember it more than losers. Happy Friday everybody, it's June 23rd and here are This Week's Highs and Lows.

HIGH: People Who Like to Look At Strangers’ Babies

The Cloonys! The Jay’Onces (named Shawn Jr. and Bea)! The…ummm, I’m sure I’m missing another! Did any Kardashians have babies? I feel like they always have a few dozen in the oven. Anyway, soooo many new babies were born recently, and while neither the couples nor their publicists have released any official photos of the wee ones, we are sure getting excited to goo-goo ga-ga over their new little bundles of fame!

Did you get lost in an Urban Outfitters, Mattel? As if we didn’t already have enough reasons to give the tragically bulge-less Ken doll grief, now instead of fixing some of his more, ehem, noticeable issues, you decided to rebrand him with six of the WORST looks humanly imaginable! A man-bun? Skinny jeans? Is that a FAUX-HAWK I spy?!? Look, I’m not an eight-year-old girl (although I’ve been told that I write like one) so I don’t necessarily pick up on what is “so hot right now" (yes, that was a Paris Hilton reference…I am ageless) for them these days, but from a father’s perspective, these new looks are t-e-r-r-i-b-l-e. And I know that Ken Carson (yes, that is the doll’s real name) wasn't some beacon of masculinity before, but I’m pretty sure young girls won’t be climbing over each other to pick up the new yoga instructing, insufferable foodie, or “Um, Actually…" Ken dolls at their local Toys ‘R Us anytime soon.

When news broke earlier this week that directors Phil Lord and Chris Miller were dropping out of the new Han Solo Star Wars spin-off movie, no one was quite sure WHO would end up taking the reigns. But on Thursday morning, news broke that none other than Mayberry’s favorite son Ron Howard would be filling the prestigious directors’ seats. This was great news for Ron, but even BETTER news for Hollywood’s favorite embodiment of nepotism: Clint Howard! Who doesn’t love Clint? He has done it all...as long as it was something his brother Ron was directing. Seriously, I love the guy (like...LOVE!), but 90% of his work has come from Ronnie's projects where he plays a silly/doting/sad/tragic role character. And honestly, more power to him! I’d want to hang out with my brother too! So now with his big brother at the helm of the new Star Wars pic, he has the chance to join Simon Pegg, Deep Roy and Felix Silla (isn’t THAT a collection of names!) as the only actors to appear in both Star Wars and Star Trek universes!

I’m sorry everybody, but it is TOO HOT to be outside right now. I know you are in love and your dream was to stand with your beau under some stringy twinkling lights and take selfies with your girls by the babbling fountain but MY GAAWWWD! It is too DANG hot for this! I hope you invested in a tent with air conditioners or at the very least one of those fun water misters you get to sit under while waiting for a table at the Outback Steakhouse. Because if you are having guests fly in from all over the country wearing three-piece suits and heels, they are going to be ANGRY that you are now forcing them to sit outside while you say your vows. Also, that cake is gunna MELT!

HIGH: Equal Opportunity To Compete in the NBA

While I love a “super-team" as much as the next guy (I’m looking at you, Bay Area Johnny-Come-Lately’s), the NBA, and really, basketball as a whole is better when there is parity in the league. When fans already know who is going to be meeting up in The Finals before the season even begins it takes a lot of the fun out of the already-too-long regular season. Like this year, when the Finals featured Golden State and Cleveland. And last year, when it was Golden State and Cleveland. So while the mighty are still strong (and in the case of the Cavaliers, potentially even stronger) the tide is beginning to shift in the right direction. The blockbuster trade of D’Angelo Russell for Brook Lopez that the Laker and Nets pulled off, in addition to the Philadelphia 76ers moving up to select Markelle Fultz with the first pick in the NBA Draft, in addition the promise of youth coming out of Boston and the steady rise of teams like the Wizards and Timberwolves (and dare I say…*gulp* the hapless Hornets?) show signs that not all hope is lost for a non-Golden State champion in this next decade. Even if we have to wait another three to five years to actually see it realized.

Hey, did you know the Stanley Cup Finals happened last week? No? Well, neither did anybody else. I am a sports nut and live in a town with not one, but TWO NHL franchises and it was barely a blip on my collective sports radar. I’m sure fans in the towns of the teams who were playing (wherever that is) were super jazzed up for the games, but the rest of the country collectively “meh"-ed and went back to complaining about the two teams in the NBA Finals, but at least paying attention to them enough to do it.