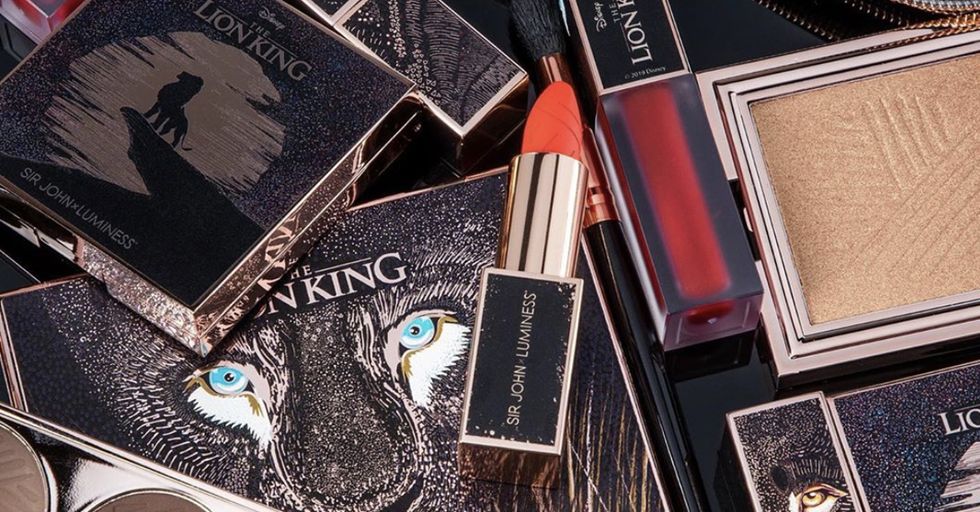 When Disney announced its voice cast for The Lion King, the whole world zoomed in on one word: Beyonce. Beyonce will be the voice of Nala, Simba's childhood playmate, and eventual wife.

Beyonce has long been famous for her inspired outfits, and stunning makeup and hair. For many years, she's worked with one makeup artist: Sir John. Sir John worked with her on her Lemonade tour, her many Met Gala looks, her music videos, and her Instagram reveals.

It launches on June 15, but read ahead to see some of Beyonce's most show-stopping looks and get a preview of the make up line!

She was stunning in the '90s, in the '00s, and still in the '10s. I'm sure she'll own the '20s and onward. She's a living legend, not only for her lewks and style, but also for the force of nature that is her performance.

So bright, so young. Tina Knowles really dressed these girls all the way up. Someone should have gone as late 90s Destiny to the Met Gala this year.

Her newer performance silhouette, Balmain body suits and thigh high boots, has been ripped off by almost every other pop star.

Everyone from Taylor Swift to Britney Spears rocks the body suit/boot combo now. But, no one stomps a stage quite like Beyonce. And, who else gets Balmain to hand make items?

For the past few years, Beyonce has worked with make up artist Sir John.

He's worked with almost everyone, but he's been Beyonce's person for years now. He's involved in some of her most memorable looks.

He's responsible for this look.

Although the make up itself is subtle, it allows her face and outfits to shine. Unlike the drag queen style of the Kardashians, Sir John's make up doesn't look like face paint.

He worked with her for this awards show face.

This outfit and face are such show stoppers. Increasingly, Jay Z is just Beyonce's arm candy.

He did the Homecoming faces.

As much as Beyonce may have "changed the game with that digital drop," her Homecoming performance revolutionized expectations of a festival performance. She essentially staged a musical. And Sir John was right there.

Destiny's Child even briefly came back for Homecoming.

The beautiful thing about Beyonce's make up is it looks effortless, even on stage. She somehow never looks like she's wearing stage makeup, she looks naturally beautiful from afar without losing her bone structure at a distance.

He did all of the makeup for her Lemonade tour and set of music videos. Lemonade felt like a tide shift in Beyonce's brand and aesthetic.

He did this Met Gala

In 2015, the year after the infamous elevator incident, the theme was "China: Through the Looking Glass." Beyonce wore a barely there dress with stunning makeup.

He did this Vogue cover.

He did her famous birth announcement, one of the most liked images on Instagram.

Although the most liked photo on Instagram is the picture of a world famous egg, Beyonce held the number one spot for 371 days with this picture.

And then he did the follow-up Grammy performance.

Beyonce came out on stage like some kind of sun goddess, cradling her belly. The image is striking.

Beyonce and Jay Z got permission to shoot their music video for APESHIT at the Musee de Louvre in Paris.

All of her faces in this are priceless. The music video is great, perhaps eclipsing the song, and her looks throughout are just amazing.

These two are close.

The cutest thing about their relationship is that they're so loyal to each other and have been for so long. He's spent more time with her than probably anyone.

As Beyonce's star has soared, so has her brand.

The Queen has dominated everything she's touched. She's one of the best selling artists of all time, in her '90s girl group and as a solo act. She's one of the few people in her generation to go by a mono-name. And, now, she's getting into merchandising.

Around the time of Lemonade's release, Beyonce collaborated with TopShop on a line of athleisure called Ivy Park

And, now she's working with Adidas on a new Ivy Park line.

Recently, she announced that she's moving Ivy Park to Adidas. Adidas has a history of working with black artists, something that Beyonce actively fights for.

Disney announced that she's doing the voice of Nala.

In Disney's live-action reboot of The Lion King, they're trying to rectify the sin of having almost no black voice actors in the original which was set in Africa.

The Beyhive is ecstatic.

Even though Nala isn't technically the star of the movie, if she's voiced by Beyonce, I mean, who are we kidding.

The trailer came out recently showcasing Beyonce as Nala and people are all up in their feelings about it.

it's going to be magic.

I hope Nala waltzes in wearing a body suit, thigh highs, and subtle but jaw-dropping makeup. A girl can dream.

So, when Sir John announced he was doing a lion king - inspired palette, people got super excited.

Beyonce has shone in the retail space with her Ivy Park line and has always had fantastic hair and makeup. A line of makeup feels almost inevitable, even if she's not directly doing it.

No one knows Beyonce's make up better than her make up artist.

Sir John releasing a line of makeup inspired by Beyonce and The Lion King, is going to be incredible.

The line itself looks amazing.

It's a blend of neutrals and brights, in strong pigments. The packaging is sexy and on brand. The possibilities are endless.

This video of the eye palette is inspiring.

The shimmer looks cool on and in the palette. Very lion-esque and princess of the desert.

If it's good enough for Beyonce...

Beyonce's brand is so Flawless-I-Woke-Up-Like-This that it carries over to Sir John. If he will put his name on a line of makeup, there are legions of fans that will follow.

It seems as though there's something for everyone.

That bright red is stunning. Finding red lipstick is like finding the holy grail. This lipstick is featured on a variety of skin tones on the Luminess page and it looks bright without being too orange on everyone.

Sir John said he was inspired by his trip to Africa.

He wanted to bring the colors found in African nature to his Lion King collaboration. Exotic neutrals tend to work on everyone -- natural colors suit almost every skin tone.

Aan't wait to see Beyonce's look at the premiere.

All of this build-up to the Lion King premiere means basically one thing: Incredible outfit and face looks from Beyonce and hopefully a new song or two to celebrate!