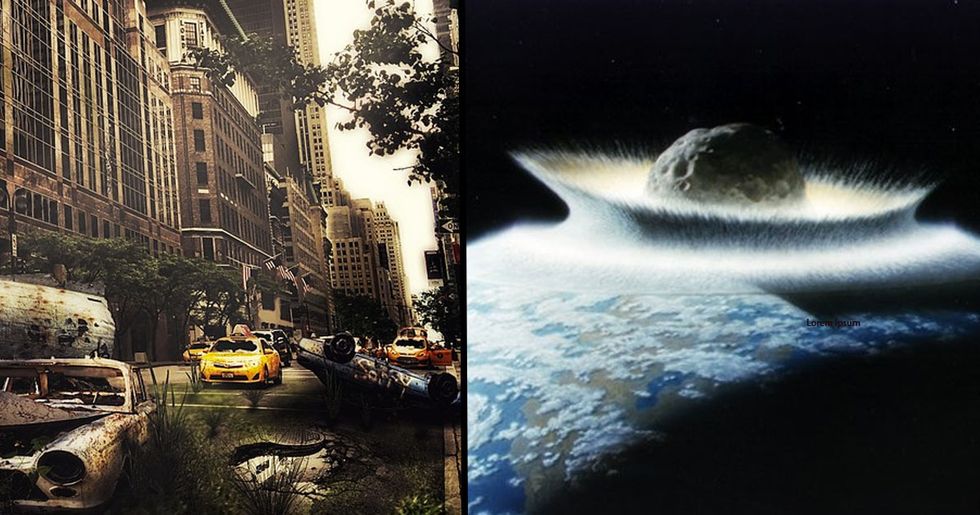 Another year, another prediction that didn't come true. Shock...

Apocalypse predictions and theories that the world is going to come to a fiery end are endless, and they're usually very casually pushed aside and slowly forgotten about completely until the next ridiculous prediction comes about.

But when these predictions come from The Bible, people are going to take it pretty seriously. According to The Bible, the world was supposed to end quite a while ago. Read on to see what the heck our universe is playing at...

Seriously, how many times has this been predicted?

I think it's safe to say that we have lost count of the numerous predictions that have been made in regards to the world's imminent ending.

These predictions go back hundreds of years...

Some of the first predictions of the world's end go back to the year 1033 and the origins of these predictions differ, varying from world-spread illnesses to the scientific predictions of astrologers.

The Bible is one of the biggest predictors...

Going all the way back to Christian mythology, Armageddon is the term for the final battle between the forces of God and Satan. It varies between different Christian denominations as to what, exactly, will happen when Armageddon takes place, but no denomination is a stranger to predicting the world's end.

Armageddon dates back to the 1st century.

This was predicted in The Book of Revelation, which solely focused on the ultimate battle between good and evil, resulting in the end of mankind. Even by biblical standards, this book is well known for its bizarre elements and it has been believed that the entire thing is a coded exhortation to Asian churches to not give up hope in the face of Roman persecution.

It's certainly not the easiest of reads.

It's not exactly the kind of book that sits on your nightstand awaiting some peaceful bedtime reading. The Book of Revelation holds an apocalyptic and epistolary tone and it certainly isn't an easy read.

The date of doom.

Something isn't quite adding up here...

The biblical prediction seems to be running 365 days late. How strange...

Biblical scholar, Rodrigues, was the first to make this rather unnerving statement about the world's imminent end. He believed that a passage from The Book of Revelation that said "He was given authority to act for forty-two months" meant that that the world's end would be in June 2018.

How did Rodrigues calculate this particular date?

It seems slightly baffling as to how the theorist generated the date of 24th June 2018 from that passage, but one should take note that, in biblical terms, math is pretty complicated. He added forty-two to 666 (the number of the Devil), and this left him with the number 2018.

Trust me, you're not the only one who's confused right now.

It isn't quite finished there! It went on to say: "Here is wisdom. Let him that hath understanding count the number of the Beast: for it is the number of a man, and his number is six hundred and sixty-six".

The 24th of June seemed to be a pretty set date.

After calculating a whole load of numbers together that came from these passages, Rodrigues concluded that the 24th of June 2018 would be the fateful date of our world's end. He conveniently didn't explain how we would all come to our imminent deaths that would lead to the wiping out of mankind, but lucky for us, it hasn't happened yet.

NASA has had their say...

The National Aeronautics and Space Administration has addressed a favorite conspiracy regarding the collision of planet Earth with another planet that has never (conveniently) been included in our solar system dioramas.

It's highly unlikely that a planet collision will be the end of humanity...

NASA stated that, if there was to be a planet collision, even in many years to come, said planet would have been visible by now. Even if it wasn't visible to the naked eye, the experts at NASA would have clocked it by now. Looks like that's another end-of-the-world theory that has been crossed out...

Mathieu Jean-Marc Joseph Rodrigues wasn't the only one predicting that 2018 would be the final year of mankind. The Nostradamus 2018 prediction was a firey one, to say the least...

Predictions that date back to nearly 500 years ago...

Michel De Nostredame, a famed 16th-century French prophet, made the terrifying prediction of the world's end through natural disasters and the destructions of World War 3. This bizarre prophet predicted that the skies will open to fire, that seas and oceans will flood the lands, and powerful earthquakes will split our planet wide open.

Conspiracy theories regarding our world's end are never-ending...

Regardless of what happens, and the numerous predictions that have been and gone in relation to the destruction of humanity, there will forever be conspiracies about our fate on this planet. Christianity has fueled many of these prophecies, including the work of Christian numerologist, David Meade.

Meade predicted that the world would end in September 2018.

This was all based on the analysis of Bible verses alongside the positions of the stars and planets, claiming that the proof lies in The Old Testament. This is all getting a little boring now...

Looks like mankind is here to stick around a little longer...

A big apology to all of the Christian prophets out there... No matter what is predicted (and no matter what a terrible time planet Earth's having right now), our planet doesn't look like it's going to give up just yet. The skies may open with fiery wraths and irreversible destruction, who knows? But we certainly know that it didn't happen back in June 2018... All we can do now is stay on our toes and wait for the next Armageddon prediction which, let's face it, will probably be at some point this year.