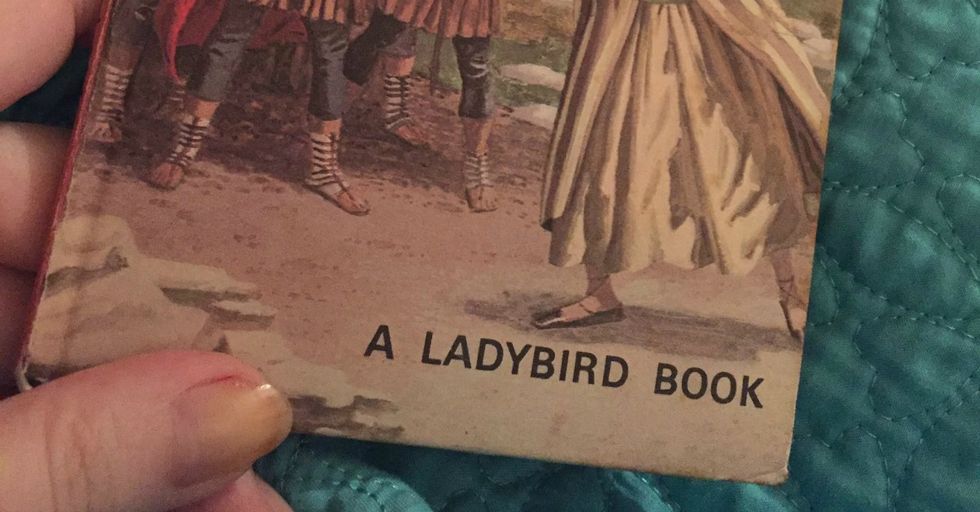 Social media is now as commonplace as milk and cereal for breakfast. For some people, scrolling through Facebook, Instagram, and Twitter is even more important than breakfast. Posting a status update while quickly chugging a cup of coffee before work is something almost all of use can relate to.

And for those of us who can't quite comprehend the intricacies of social media, there's always someone out there willing to explain it.

A columnist recently did her best to deconstruct modern social media woes using only some funny captions and illustrations from a very old book.

For some of us, social media is like breathing. We gotta do it.

If you're like a lot of people, checking messages and updates might be something you do before you even brush your teeth and get dressed for the day. After all, our culture revolves around 24/7 statuses and the need to know what other people are thinking and doing at every moment. So you want to know what happened during the eight hours you were sleeping? Yes, please.

Yeah, we know it's kind of a time suck.

The amount of hours the general public spends on social media collectively is anyone's guess, but we know it's a lot. It can become a bit of a black hole, slowly stealing away your day, minutes at a time. But it's also a good distraction from things like waiting for the tea kettle to boil or standing in long lines at the grocery store.

It definitely has its silver lining though.

Social media is a fantastic way for busy people to stay connected with friends, family, and even acquaintances they met once and feel the urge to perhaps talk to again someday. A lot of us have both friends in real life and friends online, and we like it that way.

Not to mention, having a bunch of different social channels can help us stay organized. Sort of.

Birthdays, anniversaries, wedding announcements; social media helps us keep life's numerous little moments on track. Can't remember when all twelve of your cousins were born? No worries, Facebook will remind you. Oh, and you had no idea one of your college friends just had her third baby? That's OK because, the news just came through your feed. The going out to buy a present so you don't look like you forgot is on you. Thanks, social media.

Though it can be a little bit of a free-for-all.

Along with the good, goes the bad. And after spending any time on social media at all, it's easy to see that everyone has an opinion. Which is great. But sometimes we feel the need to overshare with each other. Or fight about it. Or get into conversations that probably end in laptops getting punted across the room. It's the "tread carefully" side of the internet.

One columnist did her best to explain this odd online culture we all participate in.

Dawn Foster is a writer for The Guardian in the UK. After spending tons of time on social media, she knows it's a mixed bag and has her own insights when it comes to what she's observed. And she got some help thanks to a lucky literature find she recently shared on Twitter. She quickly turned what could've been a humdrum discovery into a generous gift of hilarity.

Not sure what to post? Look to the literature that preceded you.

Stumbling upon an old text from the '60s about Saint Paul was all Foster needed to illustrate a couple funny points about Twitter and social media in general. Some people caption famous art. Others caption store signage. This columnist decided to use the biblical story of Saint Paul (who had his own struggles) to poke fun at the digital struggles many of us face on the daily.

If you're going to holler at someone directly, go about it the right way.

Direct messaging (aka DM'ing) comes with its own set of unique rules, and every social media niche has a different etiquette attached. DM is one area where you tread carefully for fear of scaring others off. But sometimes, when you get a functional group message about the chaos around you, it's a satisfying experience.

Sometimes people throw a lot of shade on social media.

Another Twitter slight-of-hand is the "subtweet." Foster does a hilarious job of pointing out just how awkward it is to find out someone is talking behind your back online. Proper Twitter manners suggest you tweet at people directly, using their official handle, so they see that you're addressing them. But some users are sneaky, sneaky. The guy in the back of this picture does look pretty guilty.

Occasionally, you have to grab the goods and go.

Snippets of interesting info are what social media is all about. Sometimes you stick around and discuss fascinating things in length. Other times? You grab that hot information and go tell all your friends. On any given day, excitement can definitely get the better of us. Foster just puts it in a hysterical way.

Most followers could relate to what Foster laid out.

Even though the material looked a bit dated, the overall appeal of Foster's posts are clear. They encapsulate so many of our experiences, reservations, hangups, and thrills of social media. One of her followers even chimed in with this gem. It proves that we're all a little awkward, but as long as we have ridiculously old literature to illustrate our point, we can still find common ground. We just need to keep the subtweeting to a minimum.