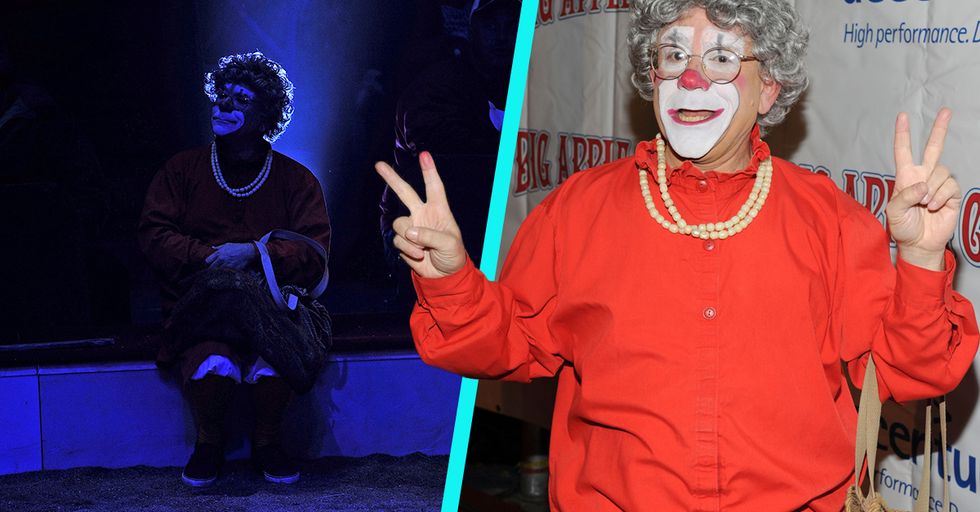 It's official: Clowns are terrifying.

Barry Lubin, a.k.a. Grandma the Clown of the Big Apple Circus, resigned on Tuesday due to allegations of sexual misconduct.

The reckoning has hit the circus world, and I have a feeling this won't be the only story to come out from under the Big Top.

Barry Lubin, 65, resigned from the Big Apple Circus after former aerialist Zoe Dunne informed circus officials of her experience with him.

She revealed that he pressured her into taking pornographic photos when she was just 16 years old. In a statement through his lawyer, Lubin said, "The allegations are true."

"What I did was wrong," the statement continues, "and I take full responsibility for my actions."

Dunne is now 29 — she told The New York Times that Lubin hired her in 2004 and then presented her with the opportunity for a little extra work.

The job? She would model for his personal photography business. In his trailer at Lincoln Center, he told her he was taking photos for a Japanese paint-on tattoo company.

The New York Times reported that he made her lie on a bed in a bathing suit and pretend to be asleep. Then, he told her to imagine how she would feel about getting to go on a date with Ashton Kutcher.

"I felt overwhelmingly sad, not excited," Dunne told the Times.

This is already disturbing enough. But this is not where it ends.

Minutes later, Lubin told Dunne to take off her underwear.

She refused. But Lubin coerced her into changing into a thong and spreading her legs.

Lubin maintained the lie throughout the encounter — he said the tattoo company would superimpose an image of a tattoo on her bare leg. He told her to pull her underwear to the side to show the most skin. She did.

When he was done, Lubin handed Dunne $100 and warned her not to tell anyone at the circus.

There was a second photo shoot, one that Dunne reluctantly participated in — she even vomited the night before. But she went, and she earned another $100.

Lubin told her, "They told me that you're one of the sexiest girls they've ever seen."

Understandably, Dunne was haunted by these photo shoots for years after they took place. Eventually, she told her parents and a therapist. In 2011 or 2012, she tried to report the incidents to the NYPD but was told that the statute of limitations on child pornography had expired.

Dunne went directly to the circus with her story in 2012, but they said they couldn't do anything because he wasn't working at the company at the time.

Then, three months ago, Lubin was rehired. Dunne reached out again. The circus' chairman Neil Kahanovitz placed Lubin on leave immediately and issued a statement:

Big Apple Circus is an organization that holds family values at the very core of our mission to provide audiences with the highest quality circus entertainment, and we have no tolerance for any behavior that violates the safety or freedoms of our patrons and artists. We took immediate action and placed Mr. Lubin on leave as an investigation of the allegations began. Mr. Lubin denied the claims, but still tendered his immediate resignation from Big Apple Circus on Friday, January 19. Mr. Lubin admitted the claims are true for the first time yesterday, to The New York Times. Our entire Big Apple Circus family is heartbroken by this turn of events.

Lubin, in his own statement, said, "I know that what happened has had a lasting impact on her life, for which I am sorry. I not only failed (Dunne), but I also failed in my responsibility as a man, an adult, a father, and as a representative of the Big Apple Circus." The circus announced that it would donate all proceeds from its opening night show to the #MeToo movement.