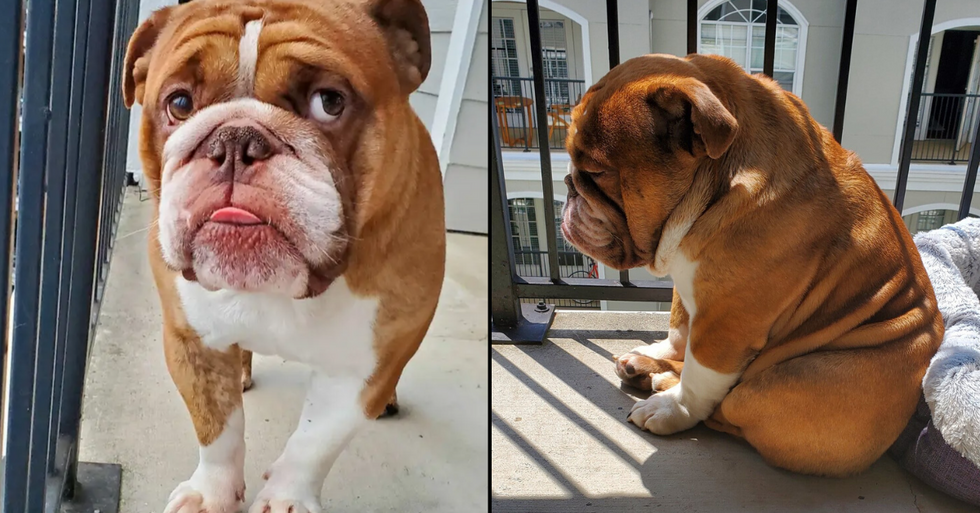 First we had grumpy cat, now meet Big Poppa - the bulldog who has captured the internet's hearts this week after he went viral for looking, well, extremely sad.

Other owners are now sharing pics of their own sad quarantine pups to show that Poppa isn't alone.

Guess self-isolation is getting to the dogs of the world, right? Keep scrolling for the heartbreaking snaps and to find out what his owner had to say...

Although one pup is now the center of attention of Twitter for an unlikely reason this week.

This adorable bulldog is usually a happy boy - but it seems self-isolation has been making him feel pretty down in the dumps.

Poppa's owner, Rashida Ellis, is a costume designer based in Atlanta...

So usually, Poppa gets to meet actors on set. Even at home he's a social butterfly - according to Ellis, Poppa also loves hanging out with kids in her building. "He loves children and then other dogs and then adults," Ellis explained. "In that order."

It's no surprise that, like many of us right now, Poppa is missing his friends...

The adorable pooch has gained newfound Twitter fame this week after a snap of him went viral...

Why did it become so popular? Well, unsurprisingly, Poppa looks extremely sad in the photo.

While Ellis was working on Tuesday afternoon, she noticed Poppa on the patio...

The pup was staring down at a pair of young brothers playing in the courtyard below. "He kept making noises to get their attention, but we're 6 stories up and they can't hear him," she explained. "I was like, 'Oh my god, he's really sad.'"

So, Ellis snapped a pic of her heartbroken pooch.

And it's safe to say that Twitter couldn't handle it.

The internet just want him to be happy...

Even Ellen DeGeneres weighed in: "Stay inside. Flatten this curve. Do it for Big Poppa," she wrote on Twitter. "i will find a cure myself if it means seeing Big Poppa smile again," commented another.

Game of Thrones star Maise Williams even fell for the pooch.

"I would throw myself in front of the virus if it meant Big Poppa could go play with the kids," wrote another user. "Priorities have now shifted to whatever is best for Big Poppa," commented a third person.

Poppa is having a really rough time of it.

"The sad thing is we have to social-distance even him," Ellis explained. "When he's inside, he just walks out to the patio looking for people. He's sleeping more. He's a little sluggish. I can tell he's not as happy and excited as he usually is. He's probably tired of just me playing with him."

And other owners quickly began sharing snaps of their sad pooches...

Poppa is certainly not alone.

All these doggos want is to see their friends again.

Never has anything been so cute yet so sad at the same time.

@RaeElle I live right across an elementary school and since it’s closed cause of covid my lil baby misses playing w… https://t.co/HjfGpTmBYu
— Miguel (@Miguel)1587569353.0

If you think this is cute...

Keep scrolling have a look at the beautiful "Fox Dogs" - a Pomeranian-Husky mix breed...