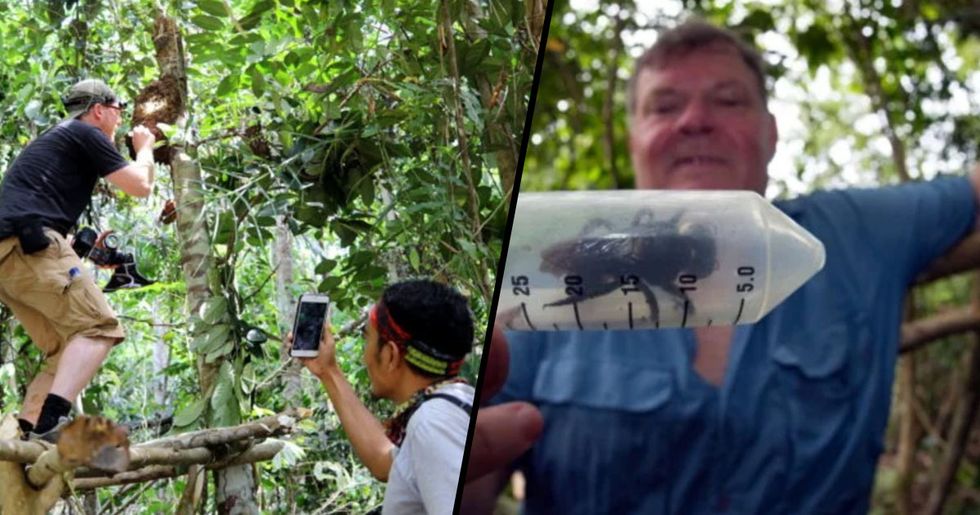 It’s been thirty-eight long years since scientists last spotted the insect known as Wallace’s Giant Bee in its natural habitat. The bee, which is native to the Indonesian islands called the North Moluccas, is known for being the largest bee in the world, with an impressive wing-span of 2.5 inches and coming in roughly at the size of a human thumb.

However, for the last couple of decades, scientists have presumed the creature to be extinct, like many of its cousins are expected to be in the next few years.

But there has been a new beacon of hope. The Wallace's giant bee has been found, alive and well, living on a remote Indonesian island. Understandably, scientists are thrilled but do still have some concerns about the insect's chances of long-term survival... Keep scrolling for the full story.

Bees are of the utmost importance to our planet.

Unless you’ve been living under a rock for the last year, you may have caught on to the fact that the fuzzy little insects are more important than we ever believed.

It turns out that bees are key to a healthy environment.

Bees are perfectly adapted to pollinate, helping plants grow, breed and produce food – They do so by transferring pollen between flowering plants and, as a result, keep the cycle of life turning.

Yet, despite their importance...

Things haven't been looking too good for our bees for quite some time, as wildlife experts and scientists have been sad to announce that bees have indeed joined the endangered species list.

Recent years have seen a dramatic decline in bee populations...

And almost ninety percent of the bee population has completely disappeared in the last few years.

There are several causes of this...

This devastating decline can be attributed to the uncontrolled use of pesticides, a lack of natural flowers, and, most paramountly, deforestation.

It's entirely our fault!

We've been steadily destroying our planet for years...

And, by doing so, we have made it virtually inhabitable for many different species... Bees included.

Or are on the brink of becoming so. A report by the WWF discovered that seventeen different species of bee have become extinct in the United Kingdom alone.

But, in a world seemingly full of darkness...

There is some shining light of hope.

Something quite miraculous happened earlier this year.

In January, a team of conservationists stumbled across a species of bee that has been believed to be extinct for the last 3 decades.

The Wallace's giant bee hasn't been seen in the wild in thirty-eight years.

The bee, which is named after it's discoverer, Alfred Russel Wallace, an English entomologist, was first discovered on an expedition to Indonesia in 1859, in which Wallace described the insect as “a large black wasp-like insect with immense jaws like a stag beetle."

Until Adam Messer, another entomologist, travelled to Indonesia and observed several in the wild. He returned home with a handful of the specimens that are now held in the American Museum of Natural History in New York. It was then that they were determined to be the largest bee in the world, with a wing-span of 2.5 inches and a body the size of a human thumb.

They weren't to be seen again.

Scientists presumed the species had become extinct as a result of deforestation.

The region of Indonesia where the bees are found lost 7 percent of its tree cover between 2001 and 2017, according to the Global Forest Watch.

That, sadly, things weren't looking too good for the Wallace giant bees.

However, they have somehow defied the odds.

Because, after thirty-eight years, the species has been spotted living in its natural environment again more.

The Wallace's giant bee is alive and well.

By some miracle, the bee has survived the mass destruction that has ripped through its habitat throughout the last few decades. The multicultural team of conservationists who rediscovered the bee also captured the first-ever photos and videos of a live specimen.

The discovery didn't come easily to the team, however.

Despite their large size, their rarity, incredibly remote location, and unusual nesting habits - they make their homes by digging holes in the nests of tree-dwelling termites - make it difficult to find. Nevertheless, the team was incredibly excited to find the insect. “It’s just ridiculously large and so exciting," said Simon Robson, a biologist at the University of Sydney in Australia and a member of the expedition.

It took the team 5 days of tireless trekking to find the bees.

“It was a lot of walking around the forest in ninety-degree heat and the highest possible humidity looking at termite nests and chasing after bees," explained Dr. Robson.

You can watch never-before-seen footage of the bees here.

But, despite their survival, scientists are still concerned about the bees' chances. Last year, an anonymous seller sold a previously unaccounted-for specimen to an unknown bidder on eBay for $9,100. “If you can get that much money for an insect, that encourages people to go and find them," said Dr. Robson. For these reasons, they have chosen to not disclose the exact location of the insects... And let's hope it stays that way.