They want children to not be afraid of the world they live in... | 22 Words 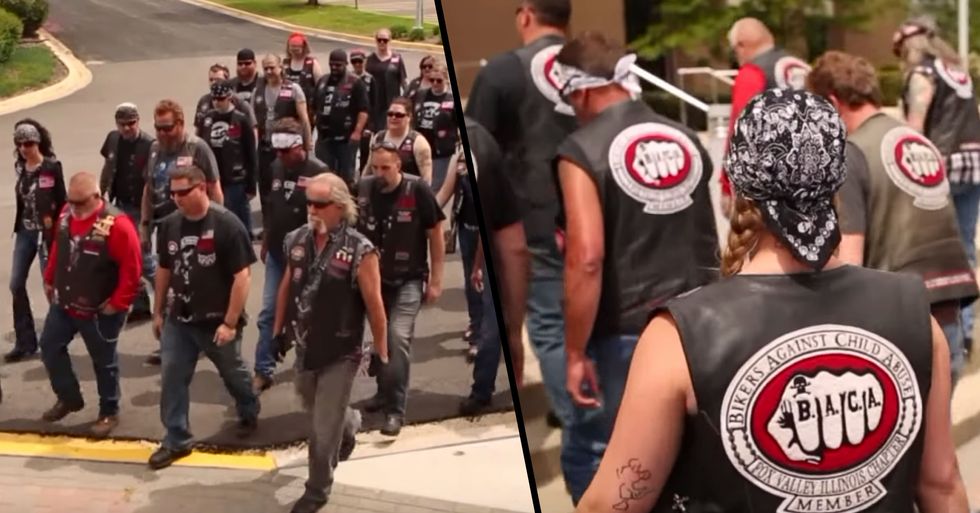 Biker Gang Walks Kids Into Court to Confront Their Abusers

When it comes to punishing those who cause harm to our children, the majority of us are happy to not hold back and dish out the punishment that they deserve.

Pedophiles and sex offenders are known to undergo a pretty rough time when serving time in prison, and, it has to be said, they get exactly what they deserve... but this doesn't make life any easier for their victims, who have to live with the horrors they endured at the hands of these sick and twisted individuals.

But there are amazing support groups out there, including a huge biker gang.

The crimes of a pedophile are among the worst that can be committed...

It really doesn't get any worse than inflicting harm and pain onto an innocent child and convicts accused of other crimes certainly see it this way.

Convicted pedophiles are guaranteed to face a tough time behind bars...

According to a journal, pedophiles are known to find difficulty forming relationships with other individuals, and it was observed that many sex offenders describe themselves as "loners."

Pedophiles face abuse, beatings, and even death when they serve their time...

It's no secret that pedophiles are targeted in prison. The New York Post reported last year that convicted pedophile, David Ramirez, was beaten and drowned in his Florida prison cell by fellow inmates. He was serving life for the molestation of an eleven-year-old-girl when 2 inmates cornered him in his cell and ultimately killed him.

The victims of these sick individuals are the most important ones.

No matter what happens to their abusers...

Children who have been subjected to this kind of abuse have to live with physical and emotional scarring for the rest of their lives, and no type of justice can ever take that away.

When a child abuse case is taken to court, the children themselves are often involved...

And this can be an extremely traumatic experience, especially for younger children.

There are support groups out there to specifically help children during these traumatic times, and one of these groups is one of the most unlikely looking.

The group is called Bikers Against Child Abuse (BACA).

The group has been around for years now, and as their name suggests, they work tirelessly to help victims of child abuse.

And as a young boy, he was subjected to sexual abuse.

It was back in 1995 when he was working as a clinical social worker and professor...

He told Tanks Good News that he had been working with a young boy who had been bullied so badly, he'd become too afraid to leave his own home... and John instantly saw himself in this vulnerable young boy.

It was joining a biker group when he was younger that helped him deal with his abuse...

"Bikers have a soft spot for kids," John explained. "I couldn’t quote you a figure, but I know that a lot of bikers had been abused as kids. When they see a chance to step in and release some of their own demons, they have no problem standing up for a child. It was just such a natural fit."

BACA is now a charity...

And according to the BACA website, the charitable organization "exists with the intent to create a safer environment for abused children."

They want children to not be afraid of the world they live in...

"We exist as a body of Bikers to empower children to not feel afraid of the world in which they live. We stand ready to lend support to our wounded friends by involving them with an established, united organization."

The charity works closely with local and state officials...

And their mission is to "send a clear message to all involved with the abused child that this child is part of our organization, and that we are prepared to lend our physical and emotional support to them by affiliation, and our physical presence."

The bikers go to some long lengths to look out for the children...

And they even make court appearances to support frightened and vulnerable children.

They are simply there for moral support...

"The sole purpose for our physical presence is to assist the child in being less intimidated and frightened, and subsequently give an accurate testimony regarding his/her abuse," the charity explained on their website. "If the child requests our presence in the courtroom, the parent or guardian for the child must petition the child’s attorney, who then will intercede on behalf of the child to the presiding Judge."

But they run a pretty tight ship...

"Absolutely no physical confrontation of the perpetrator will be tolerated by BACA, and anyone acting in such a manner will be acting outside of the scope of BACA and will be held completely and solely accountable for his/her actions," they explained.

And what's even better...

These court appearances are completely free of charge, and the bikers take time out of their personal lives to make sure they're there for the children.

The people of BACA are prime examples of the good in the world...

And their tireless work has affected hundreds of thousands of young lives for the better. Keep scrolling to learn about the new law that won't let pedophiles leave prison unless they're chemically castrated...