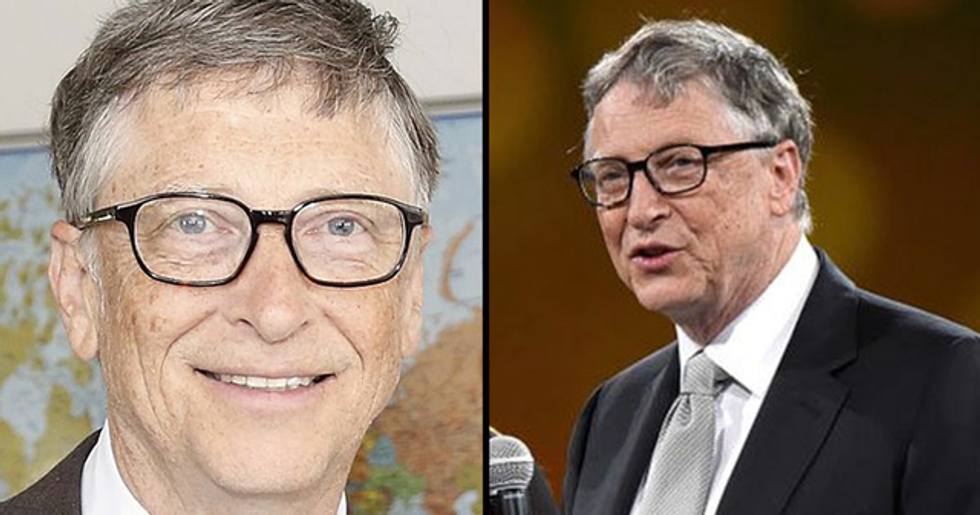 Bill Gates Reveals the Biggest Mistake He's Ever Made

We've all been there. You're at work, grafting away when... Bang. You make a diabolical error that you're unable to fix, so you subsequently spend the rest of the day hiding from your boss in the restrooms. It's always shameful, but usually isn't a big enough problem to plague you for the rest of your life.

Well, what if I told you that even the most successful people in the world have made big mistakes? And when I say big, I mean "loses your company millions of dollars" kinda big.

Bill Gates, the co-founder of tech giant, Microsoft, has recently revealed in an interview the biggest mistake that he's ever made in his career. And, needless to say, it's a pretty eye-watering error. So, if you're having a bad day at work, continue reading. It might make you feel a little better...

Bill Gates is a pretty successful man, to say the least.

He doesn't have the shabbiest of resumes; he is the co-founder of Microsoft, and is now one of the richest men in the world, with his net worth coming in at around $100 billion dollars.

Microsoft has grown to become one of the largest tech companies in the world.

The company wrote and developed one of the most-used computer software in the world. According to Forbes, Microsoft is the third biggest company in the world, with an estimated worth of $947 billion dollars.

Not bad for a college drop out...

Yep, Bill never actually graduated. He initially left Seattle and enrolled at Harvard University in the fall of 1973, aiming for a career in law after pressure from his parents. However, Gates would spend more time in the computer lab than he would in class, and he rarely studied for his exams.

College life isn't for everyone. A mere 2 years after enrolling, Gates left Harvard and re-joined his partner, Paul Allen, whom he had started a small computer company with when he was just fifteen. Beats what I was doing when I was fifteen...

Gates and Allen were childhood friends.

And they were wild about computers. But they were living in an age wherein access to computers was sparse, so they would often skip class together and sneak into their school's only computer room.

Though they didn't get expelled for this...

Nope. The school were actually so impressed by their computer skills that, instead of punishing the boys, they offered them unlimited computer time in exchange for help with improving the school computer's performance.

The boys started a small company from the school.

Instead of going to parties, smoking cigarettes round the back of the bikesheds, or partaking in any of the other generic high school shenanigans, Gates and Allen actually launched their first computer company while in high school, labeled Traf-O-Data. They even sold a computer to the City of Seattle, which was then used to count traffic.

Cue the birth of Microsoft.

Fast forward a couple of years and the pair had created their company, Microsoft. The name Microsoft came from a blend of the words "micro-computer" and "software," and was officially launched in Albuquerque, New Mexico, in 1976.

Microsoft went from strength to strength.

After nearly ten years of writing and developing the Microsoft operating systems, the company released its crowning achievement in 1985: Microsoft Windows.

All you '80s and '90s kids will certainly remember that iconic Windows logo. The software, which was a multitasking environment for IBM computers, would come to dominate the world's personal computers (PCs), and made Bill a billionaire by the age of thirty-one.

Bill, who became Microsoft's standing CEO, took the company to new heights and continued to release ground-breaking software and operational systems for computers.

And he grew it into the Microsoft that we all know and love today.

Microsoft Office was launched in 1989, which included a number of programs designed be used, well... in an office. Obviously.  Word processors, spreadsheets, mail programs, and presentation systems were all included in the Office package.

And when there was a new kid on the block...

Bill made sure that Microsoft wasn't overshadowed. Following the launch of the famous Internet Explorer, Microsoft released Windows 95, which included technologies for connecting to the internet, such as built-in support for dial-up networking, and the web browser, Internet Explorer 1.0. The nostalgia is killing me.

For the next few decades, Microsoft continued to do astonishing things.

Their first gaming console being one of them. Though the initial 2001 version of the Xbox was met with fierce competition from Sony, their re-release of the updated Xbox 360 in 2005 was a major success, and brought joy and delight to gamers across the globe.

It seems that Gates has experienced nothing but success with Microsoft.

And in the world of tech, Bill Gates can seemingly do no wrong.

When you're the CEO of the world's leading tech company, you'd think that there would be absolutely no room for any sort of error, right?

Well, Gates has recently made a shocking confession.

We're not alone! It seems that even the man who, is not only the biggest name in tech, but is also considered one of the world's top geniuses, can also make a few blunders at work.

He has confessed to making one massive mistake.

Not what we were expecting from you, Bill. In a recent interview with Village Global, he was reflecting on his time at the company and admitted to one major error that he made in the past.

And it lost Microsoft billions.

Ouch. On the bright side, at least he's his own boss!

It all goes back to the birth of the smartphone.

Microsoft famously missed out on the mobile phone opportunity. Steve Ballmer, who was the chief executive officer of Microsoft at the time, had laughed at the prospect of the iPhone, saying that it was the “most expensive phone in the world and it doesn’t appeal to business customers because it doesn’t have a keyboard."

Because, as you all know, the launch of the iPhone propelled Microsoft's rivals, Apple, to the number one spot for smartphones. Though Ballmer admitted that the iPhone could go on to sell well, Microsoft had crucially missed the touch-friendly era which was on the horizon for smartphones.

This was one of Microsoft's early mistakes...

Months were spent arguing over whether they should scrap their Windows Mobile efforts, which, at the time, weren’t touch-friendly and were born out of an era of stylus-powered devices. Eventually, the Windows Mobile was scrapped and rebooted with the Windows Phone.

But could Microsoft make a comeback?

That was the question bubbling on everyone's lips. Though Apple was at the top of the cellphone league, it was ultimately Android that would kill off the Windows Phone.

Who would be Apple's alternative?

After Apple's success with the iPhone, there was a massive opportunity for another tech company to be the alternative that would ultimately dominate the marketshare. And Google, who developed the Android system in 2005, beat Microsoft to that spot.

In his recent interview with Village Global, Gates revealed that this was the biggest mistake he has ever made in his career. He explained: “In the software world, particularly for platforms, these are winner-take-all markets. So the greatest mistake ever is whatever mismanagement I engaged in that caused Microsoft not to be what Android is."

There's only room for one Apple-alternative... And that is now Android.

Gates insisted that Microsoft could have been the biggest cellphone alternative. He continued to explain in his interview, "Android is the standard non-Apple phone platform. That was a natural thing for Microsoft to win. It really is winner take all."

But he thinks that his mismanagement ruined their opportunity.

And it resulted in the loss of a lot of money. Gates said, "There’s room for exactly one non-Apple operating system and what’s that worth? $400 billion that would be transferred from company G to company M."

You can watch the full interview here.

Despite Bill's catastrophic management error, Microsoft is still thriving. He ended on a lighter note: “It’s amazing to me that having made one of the greatest mistakes of all time... that our other assets like Windows and Office are still very strong, so we are a leading company." Sadly, they're not the leading company.

Bill Gates has since retired from the world of technology...

And he now throws himself into charitable work with his wife, Melinda Gates. The Bill & Melinda Gates Foundation works to help all people lead healthy, productive lives. In developing countries, it focuses on improving people's health and giving them the chance to lift themselves out of hunger and extreme poverty. What a power couple.

Despite his mistake, Bill Gates is still one of the most successful men in the world.

We all make mistakes, don't we? Bill Gates has time and time again proved himself to be one of the sheer geniuses of the world, and Microsoft will undoubtedly continue to change the face of technology for years to come.
20%