Bill Gates And Steve Jobs Chose To Raise Their Kids Tech-Free, And For A Good Reason | 22 Words 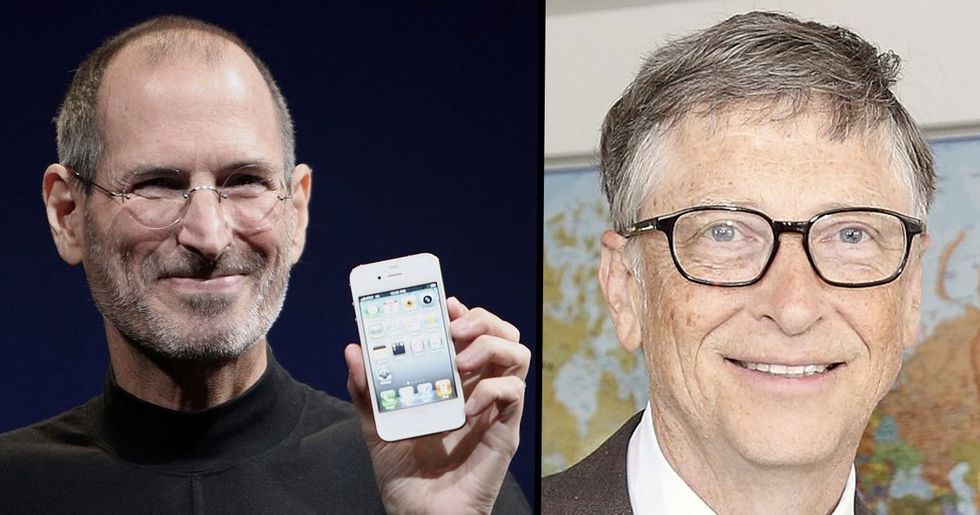 Bill Gates And Steve Jobs Chose To Raise Their Kids Tech-Free, And For A Good Reason

So it turns out the founder of Microsoft and co-founder of Apple, perhaps two of the biggest names in the tech industry, shared similar parenting tactics. Despite the still on-going rivalry between Windows and Apple, it seems the geniuses agreed on one thing: raising their children without technology. But, and it's a pretty big but, why?

Bill Gates and Steve Jobs helped to build a world which relies so heavy upon technology - it's what helped make Bill Gates the richest man in the world. So what exactly does their decision to limit their kid's screen-time say about the products they themselves created? With increasing research showing the correlation between mental health concerns and using smartphones, is there any surprise the tech-elites put restrictions in place for their children?

In a series of interview, both Gates and Jobs explain why their children were raised without technology - and trust us, it's for good reason.

Not until you're old enough.

In an interview with the UK Mirror, Gate's said: "we didn’t give our kids cell phones until they were 14 and they complained other kids got them earlier."

But what is an appropriate age?

The report, Kids & Tech: The Evolution of Today’s Digital Natives found the average age for a child getting their first smartphone is now 10.3 years-old.

There are other rules in the Gates household as well.

Gate's revealed other tech-related rules he abides by, including no phones at the dinner table. “We often set a time after which there is no screen time and in their case that helps them get to sleep at a reasonable hour," he said.

And if you're wondering why.

In 2007, Gates chose to cap his daughter's screen time after she developed an 'unhealthy attachment' to a video game.

Which is now a very common problem.

The World Health Organization estimate that 3-4% of gamers struggle with addiction challenges.

Gates hasn't completely banned his kid's use of technology - just moderates it. “You’re always looking at how [smartphones] can be used in a great way, homework and staying in touch with friends, and also where it has gotten to excess," he said.

And he isn't the only one.

Steve Jobs, who was the CEO of Apple before his death in 2012, followed similar parenting tactics - perhaps the only thing the two tech-elites can agree on.

In an interview with the New York Times in 2011, Jobs shocked the public when he revealed his kids didn't own the latest iPad.

Jobs told reporter Nick Bilton they limit how much technology their children use at home after he asked the Apple CEO what his kids thought of the new iPad.

"We need to do something about it.'"

Tony Fadell, co-creator of the iPod, said in a recent interview that Jobs would want to address concerns surrounding tech addiction if he was still alive today. "He'd say, 'Hey we need to do something about it,'" he said.

The reality of technology.

We're currently in a tech-obsessed world: there's no denying it. But what are the effects of spending too much time online?

Because the risk of an eighth-grader developing depression increases by a staggering 27% when they frequently use social media.

And the dangers are pretty scary.

Jean Twenge, a psychologist at San Diego State University, says: "As teens have started spending less time together, [due to technology] they have become less likely to kill one another, and more likely to kill themselves."

So perhaps limiting children's tech-use is a good thing.

Yes, they main moan. But it's for their own good - and limiting their screen-time doesn't mean completely banning the use of phones.

But it's still "a tricky issue for parents."

At the Today Show, Gates said he doesn't  keep the passwords to his kids' Facebook accounts, but admitted that ensuring children's safety online is "a very tricky issue for parents now."

And people have some pretty strong opinions about it.

It's caused divided opinion on Twitter, with some arguing that Jobs and Gates are financially gaining from people's tech addiction.

Because it really does say a lot.

Some have even described their tech-free parenting as a 'red warning' to us all regarding the danger of tech-obsession.

And some are using their tech-free rule as guidance.

Because if anyone knows how to safely use technology - surely it's the guys that are responsible for creating it.

We're sure his children wouldn't get iPhones anyway.

Gates, who is now 63-years-old, has a net worth of $96.7 billion and has donated over $35 billion to charity - making him one of the biggest philanthropists.

Because they're the biggest rivals.

Gates dropped out of Harvard University to launch Microsoft back in 1975, and their biggest competitor today has to be Apple Inc.

Everyone has had to choose sides at one point: Mac or Windows laptop? iPhone or Windows phone?

How it all started.

Jobs revealed the first ever iPhone back in January 9th 2007, introducing the world to a revolutionary smartphone.

And now Apple is on their 10th iPhone.

Apple's new CEO, Tim Cook, said the company's worth is "not the most important measure."

Rivals with respect for each other.

in a 2013 interview with CBS's 60 Minutes, Gates paid tribute to Jobs, saying: "we were within a year of the same age, and kind of naively optimistic and built big companies. We achieved all of it, and most of it as rivals, but we always retained a certain respect and communication."

In fact, they actually got along in the end.

"Steve and I actually stayed in touch fairly well, and we had a couple of good, long conversations in the last year, about our wives, about life, about what technology achieved or had not achieved," Gates said.

And Jobs will always be remembered.

Because he was never afraid to speak about death, and his quotes can still be seen under people's Instagram captions to this day.

But if you're concerned about your child's online safety.

Follow Gate's rules. No phones at the dinner table, no phones until you're old enough, and no phones before bedtime.

The downfalls on social media and technology are becoming more and more talked about, so do some research on how to keep your tech-addiction at bay.

But don't worry, you can still enjoy your favourite gadgets.

Just use them wisely. If Jobs and Gates thought it was necessary to limit their children's screen-time, maybe we all should.