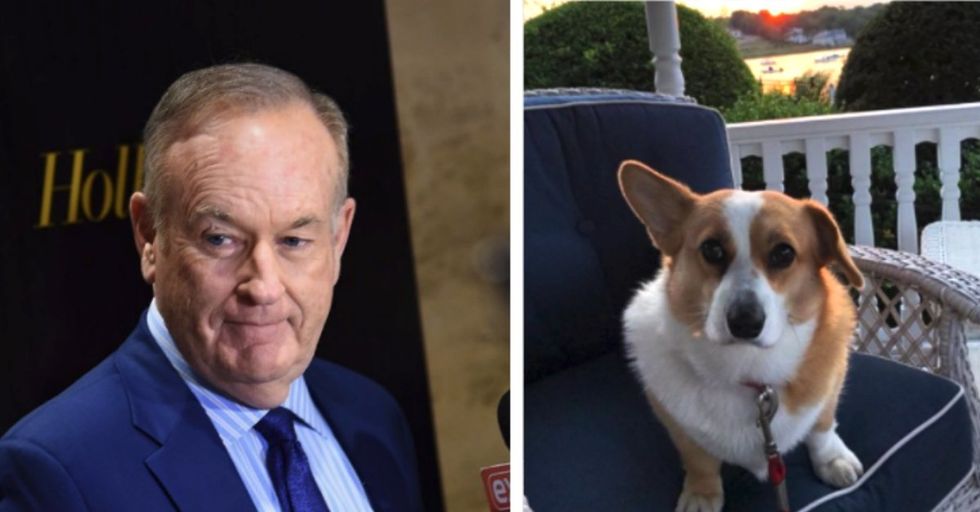 It must be so nice to be a dog. Dogs know nothing of the current political climate or latest sex scandals. They have no idea that nose hair extensions are a thing now. They get to spend their days basking in sunlight, chasing squirrels and chomping on kibble. If you're a dog, the only thing you have to worry about is answering the age-old question: Who is a good boy?

But if you're Bill O'Reilly's dog, your life is less carefree than that of other dogs. That's because Bill O'Reilly has some pretty messed up opinions on how to treat other people. And also on the existence of dog knees.

Bill O'Reilly, sexual harasser and former Fox News host, has kept a relatively low profile ever since being fired back in April.

And honestly? It's been pretty great. The only thing that would make it greater would be if we as a society no longer had to deal with sexual harassers pretty much everywhere else. Including the White House. But we digress.

If you check out O'Reilly's Instagram account, you'll see a bunch of pictures of his adorable dog Holly.

Look at her. She's adorable. Do you think she knows what kind of a guy her owner is? Perhaps. Dogs are very smart.

Yesterday, O'Reilly shared an image of Holly with an incredibly bizarre caption.

"Holly would never take a knee during the National Anthem even if she had knees," he wrote. OK. OK. We're gonna need you to take a step back, William. First of all, let's be honest. Dogs don't care about the national anthem. Unless you have trained Holly to expect a Beggin' Strip every time someone sings "and the home of the braaaaaaave," she is not paying attention. Also, can we just stop debating the entire #TakeAKnee movement? No one is doing anything wrong or disrespectful by kneeling. Now that that's settled, there's one more huge problem with this Insta post, Bill.

Of course they have knees! Why did Bill O'Reilly think they didn't have knees? Because this is the Internet, people were quick to point out just how wrong O'Reilly was.

Bill, you were 100 percent incorrect about the existence of dog knees.

But also, stop foisting your terrible opinions on your innocent pup. She did nothing to deserve this treatment. Poor Holly.