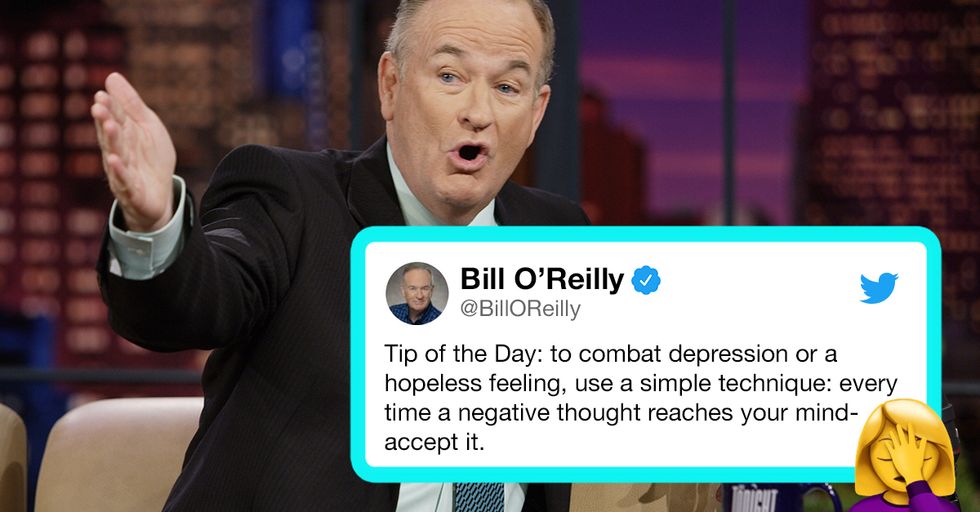 Bill O'Reilly — sexual harasser and former Fox News host — has had quite the year.

Back in April, he was fired amid a flurry of sexual harassment claims. Of course, he hasn't disappeared from the Internet. He's still hosting a radio show and tweeting regularly, sharing his wacky ideas like "dogs don't have knees" and blaming God for his own heinous actions.

But that's not all ol' Bill is doing! He's also started giving people life advice in the form of "Tips of the Day." Oh boy oh boy are they...something.

There are a lot of good Bills out there. Bill O'Reilly is not one of them.

There's Bill Nye the Science Guy, who taught us about volcanos and tectonic plates. There's Bill Shatner, who starred in one of the beloved TV shows of all time and released some incredible solo albums. There are bills you have to pay, which may seem not so great, but at least they're not sexually harassing anyone! The same cannot be said of Bill O'Reilly.

O'Reilly's social media game is all kinds of weird. He's tweeted several of these "Word of the Day" posts:

Careful viewers will notice that while O'Reilly shares a Word of the Day and even has a fancy graphic to go along with it, he doesn't define the word of the day, which is KIND OF THE ENTIRE POINT OF HAVING A WORD OF THE DAY. (FYI: a "blatherskite" is someone who talks a lot but doesn't make a lot of sense. We don't need to point out the irony here, right?)

You might be thinking that first "Word of the Day" post was a mistake. It was not. He did it again with "Agog":

"Agog" means "full of intense interest or excitement" — which is actually something you'd think Bill would want people to be when writing to BillOReilly.com. Maybe he wasn't aware of the meaning of the word because he couldn't find the definition in his tweet.

He "brought back" the Tip of the Day! Full disclosure: We had no idea O'Reilly's "Tip of the Day" had ever been a thing. But now that we know it exists, we kinda can't get enough. He started with this tip for eating. Eating is not really something we needed help with, Bill, but...thanks?

From there, the tips get more and more bizarre. They're not all necessarily bad advice, but the fact that Bill O'Reilly is giving people tips is just...weird. Here's one about Christmas cards:

And yeah, sure. A nice note in a Christmas card would not go unappreciated. But you know what? We didn't need to hear that from a man who has sexually harassed multiple women. The next tip is about clothing sizes. (Why? We don't know!)

Apparently, O'Reilly is rockin' the double XL these days.

Uh, good to know? We love how there's no link to a credible source for this information. The fact that Bill O'Reilly thinks it is enough, right? The guy may be completely clueless about dog leg anatomy, but he knows about clothing sizes.

Here's how Bill O'Reilly wants you to deal with phone solicitors:

OK, we're not joking around anymore. Who is asking for this advice from Bill O'Reilly? Why is he doing this? Is this a bit? Is this a character he's playing? Is Bill O'Reilly becoming more unhinged every single day?

If this tip is anything to go by, the answer to that question may be a resounding "Yes!"

We get what Bill is trying to say here (kind of), but this kind of reads like he's saying to just accept the negative thoughts you're having as truth. Which, if you're Bill O'Reilly and are constantly thinking about the awful ways you've treated women in the past, makes sense.

Here’s the Tip of the Day: when visiting a restaurant or store always be polite but know you are entitled to good s… https://t.co/TkXnHIzcVk
— Bill O'Reilly (@Bill O'Reilly)1513344795.0

Otherwise known as: Be polite in public and don't make a dramatic scene everywhere you go. We're glad he finally seems to have learned this particular lesson.

Here's one more tip of the day:

This seems like a great recipe for stirring the pot, honestly. 12 hours is a long time to stew on negative thoughts (even if you are trying to replace them with positive thoughts). We have a couple tips for Bill, too. First, stop this "Tip of the Day" nonsense. Second, stop sexually harassing women. That's pretty much it, really.