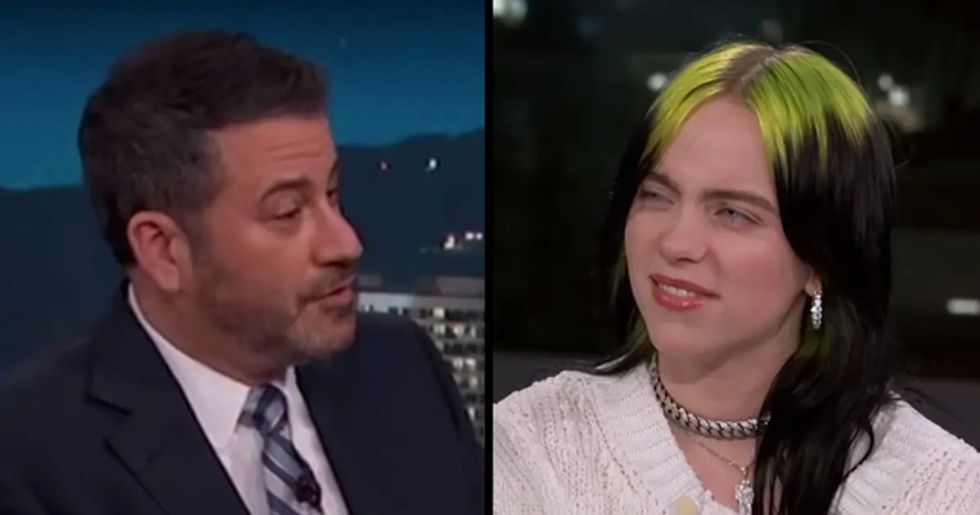 Billie Eilish is well-known for making surprisingly innovative and cool music, alongside her notoriously crazy image. No item is too brightly colored, explicitly branded, or oversized for the singer. But because of her particularly out-there and creative style, many forget that she's also just seventeen years old.

But not Jimmy Kimmel. This week, the singer was interviewed by the notorious talk show host, and very quickly her young age became abundantly clear. Be prepared - her answers to some of these questions will make you feel super old.

She's been writing and creating her own music since she was incredibly young, and has risen to fame with huge hit album When We Fall Asleep, Where Do We Go? earlier this year.

It's safe to say, Eilish is as famous for her image as her music.

Because the teen has some really unique personal style. She doesn't dress like your typical seventeen-year-old-girl, that's for sure.

But because of Eilish's mature music and fashion sense ...

We know, it's hard to believe. And boy, does it make us feel like we're underachieving.

Jimmy Kimmel seemed set to remind us that in spite of her huge success, Eilish is still very much a typical teenager.

Because he quizzed her on some greats of the past.

And Eilish's answers will shock anyone born before the '90s.

Kimmel first asked Eilish if she knew who Madonna was.

And (thank God) the teenage star said yes, she did.

Kimmel then asked, "Can you name a Van Halen?"

To which Eilish simply replied, "Who?"

Kimmel was not impressed.

The interview wasn't a total wash.

But there were some notable omissions from Eilish's musical knowledge.

She'd never heard of Huey Lewis or Run DMC. In fact, when asked about the latter, she simply asked: "What is that?"

And it wasn't just music Eilish had big knowledge gaps in.

And her movie knowledge was similarly spare.

When asked about Ghostbusters and Gremlins, she confessed she didn't think she'd seen them.

It's clear Eilish was embarrassed.

"You're making me look so dumb!" she laughed.

But Kimmel claimed that wasn't his intention.

"The point that I'm trying to make is you're younger than I am," he explained.

Alongside the quiz on cultural history (which starts around the three-minute mark), Eilish discusses the trappings of fame and the perils of being a teen - it's well worth a watch. And if you fancy more Eilish content, keep scrolling to see why the internet can't seem to stop discussing her body. Warning: it's pretty gross.