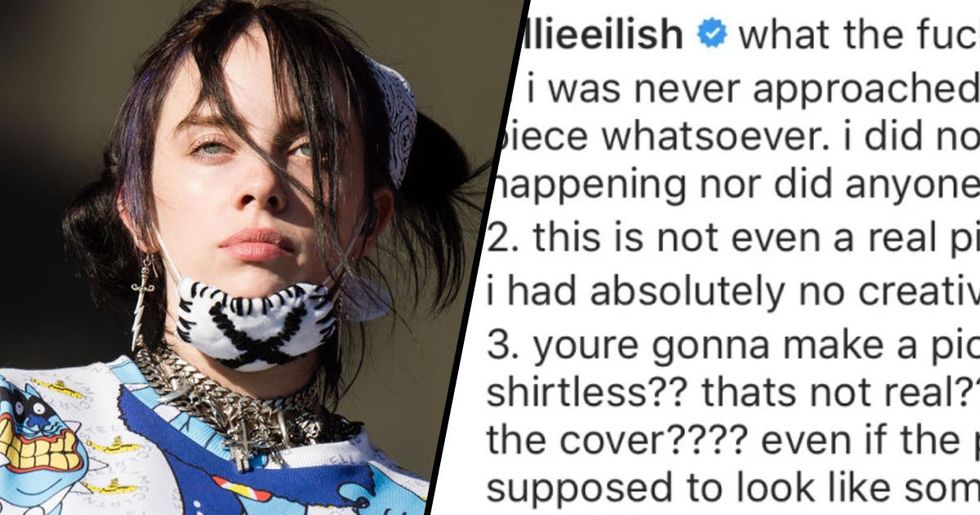 Being a woman in this day and age is hard, with people constantly throwing their opinions at you, telling you what you should be wearing, and how you should be acting. It's even worse if you're in the spotlight because every single one of your moves is being monitored by a large group of people. Sometimes, we can't help but wonder if any of these people have ever taken a step back and realized that they would be better off concerned with their own lives, as opposed to worrying about the lives of women that they have never crossed paths with.

One thing's for sure, the majority of Twitter isn't going to stand for it, especially not Billie Eilish fans. This isn't even the first time she has been through controversies with the choice of clothes that she likes to wear, but this publication might have taken things way too far this time.

Keep reading for the full story, including Elish's reaction.

For all of you who don't know, this is Billie Eilish.

She's a seventeen-year-old singer who has recently taken the music world by storm.

Most artists have to release a couple of albums and dedicate their lives to promoting their work before they are even recognized as an artist, but then there's a lucky few, like Billie, who reach superstardom on their first attempt. When the album was released, she wrote: "This album [means] the world to me please take care of it."

She has collaborated with the likes of R&B singer, Khalid, which exposed her to a whole bunch of new people.

And that only helped her fanbase grow stronger. The seventeen-year-old singer is well-known for her catchy beats and dark lyrics. Despite being so young, it seems as if she has already cemented her position within the music industry.

Even if you think you don't know her, you probably do.

Her song "bad guy" turned the whole of the internet into Eilish fans because of the catchy-nature of the beat and, before you knew it, every radio station was playing the tune. It was impossible; you just couldn't get away from it. But, hey, I'm not complaining, it's a good song.

However, this time, the singer has hit the headlines for different reasons altogether.

Billie Eilish has been the latest victim of online trolling. Firstly, it was that horrid tweet going viral due to the disgusting comments made about the seventeen-year-old. The pictures that were posted show her wearing a tank top with an oversized zip-up jacket and you would never believe some of the comments that have been made...

This isn't the first time that we've seen female celebrities be sexually harassed.

A video surfaced online showing the "Malibu" singer being groped by a fan.

She is seen to be walking with her husband, Liam Hemsworth, through a crowd of fans when one of them decides to grab Cyrus, trying to touch her breasts. She addressed the incident and told people to respect her personal space.

Eilish was also forced to talk about this issue as a similar thing happened to her at a fan meet and greet not too long ago.

"Pls don’t grab my boobs in the meet and greet," she wrote on social media. "Keep playing the sh*t cool but it is very much not."

No one should have to be reminded that celebrities are humans too.

There are so many problematic aspects of the tweet about Eilish. First of all, as I have mentioned multiple times, Billie Eilish seventeen. Seventeen. She should not have to be subjected to sexual harassment over the internet. Legally, she is still a child in some states, and making sexual advances towards a child can get you into a lot of trouble, for those of you that don't already know.

However, the people that are making these sexual advances have argued that she is legal in half of the US, so they don't see what they are doing wrong.

This is the problem. They can't seem to see how morally wrong it is for them to be sexually objectifying Eilish in such a manner, even when she has politely asked them not to.

They have also decided to bring up the fact that Eilish uses sexual innuendos in her music as some sort of justification for their actions.

Let me get this straight. Just because there's a line in her song "bad guy" that reads: "bruises on both my knees for you," it's now acceptable to start sexualizing her? I really don't see the correlation here...

This user had something to say to those of you in the back that still don't get it.

Billie Eilish is a dark-pop artist. Her lyrics are just that: lyrics.

Multiple tweets were posted to Twitter by @PogbaEscobar, along with captions that enraged everyone.

The photos immediately gained a lot of attention and the comment section blew up with wild Billie Eilish fans, along with a whole bunch of other people, expressing their disgust at the user.

A lot of people on Twitter resorted to calling the user, @PogbaEscobar, a "pedophile" for "preying" on Eilish.

This user wasn't having any of it. She's planning on blocking everyone that chooses to sexualize the singer.

Her fans were quick to rush to her defense.

Most of them were referencing a previous interview with Calvin Klein in which Eilish had shared the reasons why she chooses to wear baggy clothing. "Nobody can have an opinion because they haven’t seen what’s underneath. Nobody can be like, “she’s slim-thick," “she’s not slim-thick," “she’s got a flat ass," “she’s got a fat ass. No one can say any of that because they don’t know."

But it seems as if some creeps on the internet have purposefully been searching for pictures wherein the singer is wearing "revealing clothing."

So when Eilish was seen wearing a plain, white tank top, the dodgy side of the internet took it as an opportunity to spread the photos with vile comments that sexualized the singer. The original tweet referred to her as "thick," which is a term typically associated with females that have big breasts, thighs, or backsides.

What's the difference between calling a girl "thick" as opposed to "beautiful"?

This is what some people aren't understanding. It is not a compliment to be considered "thick" as it has extremely sexual connotations. It reduces girls down to just their bodies and the personal pleasure of the person giving the "compliment." Words like "beautiful" or "pretty" are more appropriate to describe women as they don't have the same crudeness that "thick" does.

This was precisely what Eilish was trying to avoid.

The singer is known for wearing baggy clothing because she wants people to focus on her music, as opposed to her body. But it seems like some idiots online just can't help themselves.

Even after Eilish specifically said that she did not want people to objectify her, there are people out there that choose to do the complete opposite.

Since the post garnered more attention, other pictures have also emerged of the singer wearing shorts. And I can bet that you know what people were talking about there. This tweet has been deleted as it was reported by a huge number of people.

We're not here to support this kind of behavior from grown men towards a teenager.

If you're going to post sexualized comments about a seventeen-year-old, expect an immediate backlash from the internet. The original post has also been deleted, but, luckily for you, we managed to get our hands on it before it was removed. You can't get away with it that easily, @PogbaEscobar...

Here's what the user originally tweeted.

It's a sad time when a teenage girl can't even walk out of her house wearing a tank top on because people like this make them feel uncomfortable by sexualizing their bodies. Notice the oversized jacket that she is wearing on top. Even that wasn't enough to stop the vile comments from rolling in.

Many people took it one step further, personally messaging @PogbaEscobar.

The user decided to screenshot and share certain comments that were bombarding his private messages. And yet, despite writing "this is killing me," he continued basking in all of the attention that he was getting for his vile comments about Eilish.

Surprisingly, he also received some support from other misogynistic men who didn't have the guts to post their opinions publicly after seeing what happened to @PogbaEscobar.

If you think like this, you are part of the problem. Some people even went as far as to say that the singer deserves to be "blacked," which is a term used "when a white woman has sex with a black man for the first time or becomes pregnant with a black man's child." This is one of the biggest problems with the internet. People think that they can say whatever they want because, in all honesty, there are no repercussions when it comes to comments like these from trolls.

Do us all a favor and keep your lame opinions on your side of the screen unless you want to have a bunch of enraged Twitter-users on your back.

Or, better yet, educate yourselves on how to be respectful towards women.

I thought that particular lesson would have been easily learned, but it doesn't seem like it.

And so the disrespect continues. Recently, Elish called out a magazine publication that took things one step too far.

But it didn't look anything like her. It seems as if they had taken an artistic twist on Eilish, making her bald, with pink and yellow glowing skin. Weird, right? Here's a helpful suggestion, whoever came up with the idea should be fired immediately. Poor decisions were made.

And it just gets weirder.

They had also used a shirtless version of her. Bear in mind what Billie has always expressed about her body and how she wishes to be portrayed by the media. It seems like Nylon Germany didn't pay attention to any of that though.

And here's another big problem.

Billie had no idea about this cover. She was just as shocked as we all were when it was posted. When asked, her team also denied that they had any involvement with the publication or the cover.

This raises so many questions...

Why did they post it? Who even created the image? Why did they not consult Eilish or her team?

And, naturally, Billie was extremely frustrated.

She took to the comment section to make her opinion loud and clear. She broke it up into four statements so that Nylon could easily understand why she was so upset.

How can a company as popular as Nylon do something as sleazy as this?

They knew that their idol was going to be vocal about this one like she always is.

Lots of German fans thought that this would ruin their chance of ever meeting the singer.

But I don't think that will ever be the case.

The post has since been removed and the publication as issued an apology.

Due to the intense backlash from Eilish fans, the post has been removed from all social media platforms and Nylon Germany addressed the problem. It's a simple concept to understand: don't do things without anyone's consent. Someone let Nylon know, please.