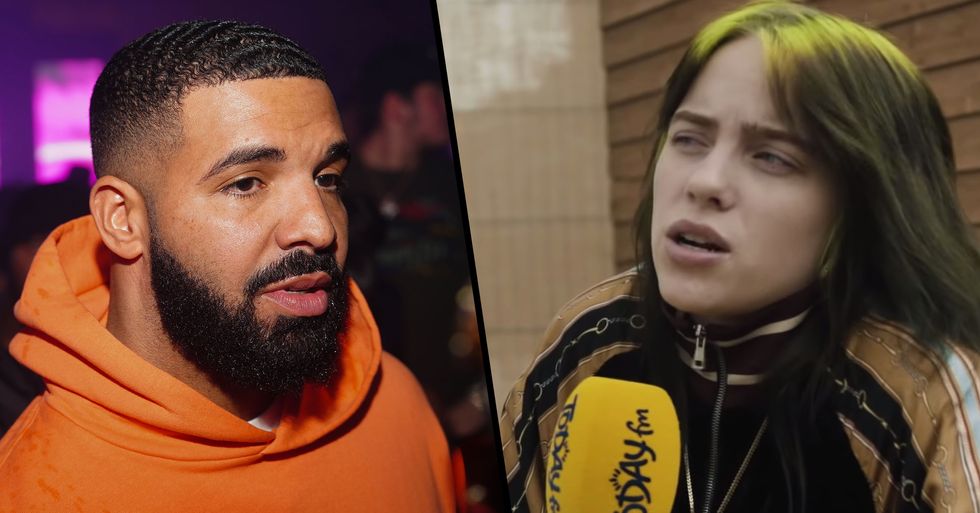 Billie Eilish Defends Drake for Texting Her When She Was 17

But rising to fame at the age of fifteen certainly had its downfalls, and the over-sexualization of her image by fans was one of them.

But when thirty-three-year-old Drake was caught texting her when she was only seventeen, people were not impressed.

But now Billie has come to his defense. Keep scrolling to find out more...

It also gives her music quite a different sound...

And sadly, people have already attempted to exploit and body-shame the teenager. Even when she was as young as fifteen, online trolls were trying to sexualize her for no apparent reason.

And speaking of older people...

Billie has been open about when the King of R'n'B, Drake, was personally texting her last year.

The then seventeen-year-old described him as "the nicest dude"...

Billie opened up in an interview with Vanity Fair last year about her relationship with thirty-three-year-old Drake, saying, "I’ve only like texted him, but he’s so nice. Like, he does not need to be nice, you know what I mean? He’s at a level in his life where he doesn’t need to be nice, but he is, you know?"

Fans were not impressed...

And people were quick to call out the world-famous rapper for being "creepy" and "inappropriate" towards a girl fifteen years younger than him.

Billie remained quiet during the outrage...

But she has now spoken out about her relationship with Drake.

In an interview with US Vogue, she said, "The internet is such a stupid-ass mess right now."

Billie doesn't see the harm in it, at all.

"Everybody's so sensitive. A grown man can't be a fan of an artist?" she pondered.

Billie then got political...

"There are so many people that the internet should be more worried about. Like, you're really going to say that Drake is creepy because he's a fan of mine, and then you're going to go vote for Trump? What the f*** is that s***?" she said.

Billie seems to be a young woman who knows how to take care of herself...

So if she insists that her relationship with Drake is innocent, we had better get on board and believe her!