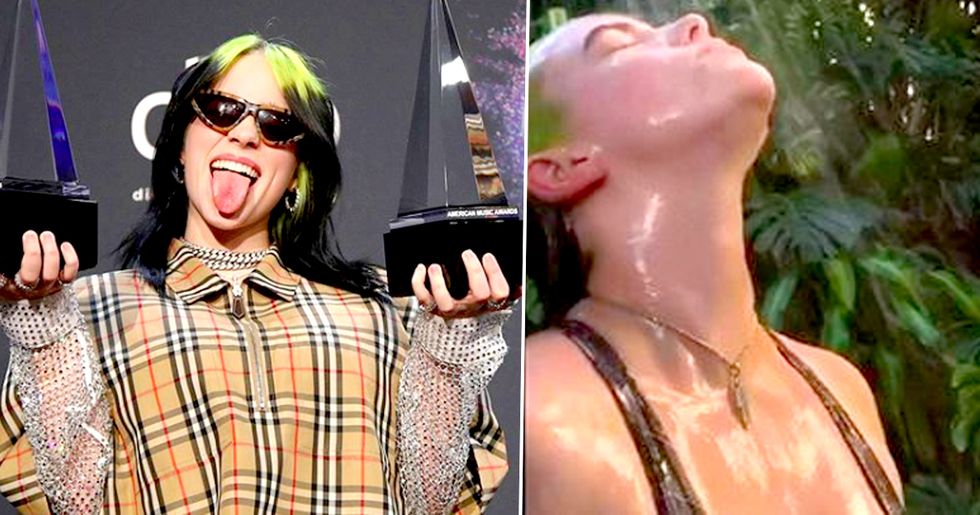 After revealing her body in a video on Instagram, Billie Eilish received a fair amount of backlash from people who are evidently offended by the sight of a young woman's body.

But now, the singer has responded and, in true Billie fashion, she has spectacularly shut down all of those haters.

Until a few months back.

Billie kicked off her Where Do We Go world tour in Miami earlier this year, where she premiered a powerful video about body shaming.

The video was showcased during the interlude of her debut show...

Fans could be heard cheering and screaming as the video shows Billie start to slowly remove layers of clothing.

But, of course, her decision wasn't without the risk of backlash.

Any woman taking control of her body was bound to trigger some people, and Billie has fared no differently.

Though most people praised the singer for her video...

Others weren't so impressed and claimed that, because of her showing her shoulders, stomach, and chest, they had ultimately "lost respect for her." I know, some people lead some really sad lives, don't they?

She responded to the haters.

And, never one to hold back, Billie gave a spectacular reply to all those who claim to have "lost respect" for her.

And it turns out that she couldn't care less about what these people think of her.

In an interview with Dazed, Billie opened up about the incident and pointed out that, no matter what she wears, she's going to receive hate and backlash.

She has realized that she simply can't win.

So she now does whatever the hell she wants to. She explained, "If I wore a dress to something, I would be hated for it. People would be like, ‘You’ve changed, how dare you do what you’ve always rebelled against?’ I’m like, ‘I’m not rebelling against anything, really.’ I can’t stress it enough. I’m just wearing what I wanna wear."

She now just does what she wants to do.

Whether it be to wear more baggy clothes, wear more revealing clothes, or wear hardly any clothes at all, it will be her own decision. "If there’s a day when I’m like, ‘You know what, I feel comfortable with my belly right now, and I wanna show my belly,’ I should be allowed to do that."

She posted a video wearing a bikini.

Taking to Instagram earlier this year, Billie posted an incredibly short video of herself wearing a bikini on holiday.

Despite the fact you can only see the top of Billie's shoulders, many people slammed her online calling her all sorts of crude names.

It was trending. There were comments like, 'I don't like her anymore because as soon as she turns 18 she's a w***e.' Like, dude. I can't win. I cannot win.
I saw comments like, 'How dare she talk about not wanting to be sexualized and wear this?!'"
If I wore a dress to something, I would be hated for it.
People would be like, 'You've changed, how dare you do what you've always rebelled against?' I'm like, 'I'm not rebelling against anything, really.' I can't stress it enough. I'm just wearing what I wanna wear.

And leave the girl alone while you're at it.

The young singer is truly paving the path to a more equal and inclusive world for women...

Never change, Billie. While on the topic of powerful women, keep scrolling to read the stories of the fifty most iconic feminists...