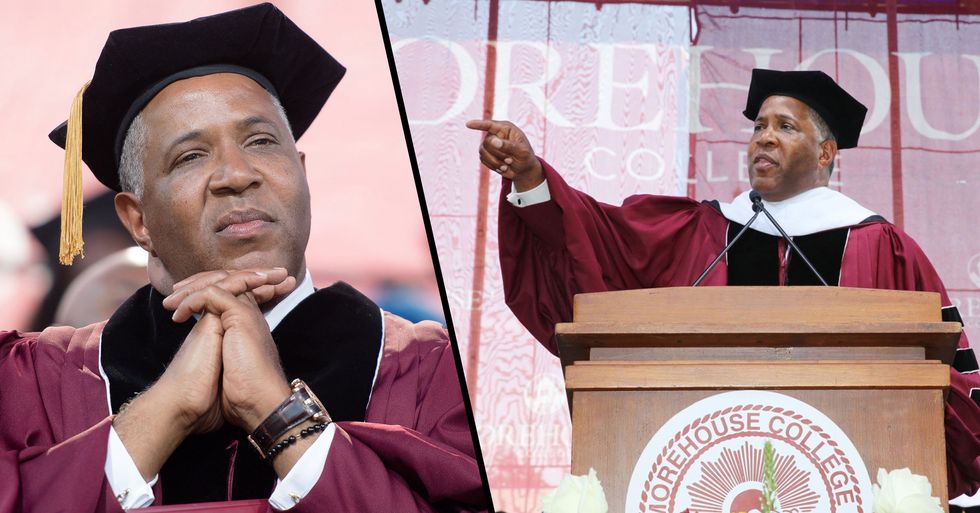 In May this year, billionaire and Vista Equity Partners CEO, Robert F. Smith, made headlines when he pledged to wipe out the entire Morehouse College class of 2019's student-loan debt.

And now, just when you thought one person couldn't get any more generous, he has extended his offer to include the educational loans of all parents of the students in the class of 2019.

Keep scrolling to hear the story of this incredible man, and what it means for both the students and the parents' futures.

Robert F. Smith was born in 1962 in Denver, Colorado. Both his parents, Robert Smith and Dr. Sylvia Myma Smith, were high school teachers with PhDs.

His values were instilled into him as a child.

I have a dream! Robert’s mother accompanied the young Robert to the March on Washington to witness Martin Luther King’s "I have a dream" speech.

And, as a result of his upbringing, Smith always had a fierce ambition.

At high school, Robert tried for an internship at Bell Labs but was told that there was no space.

Luckily, an MIT student didn’t show up and Robert was able to get his break.

He’s had quite the resume.

After working at Bells Labs, Robert took on positions at elite companies such as Air Products and Chemicals, Goodyear Tire, and Rubber Company.

But he wasn't finished with education just yet...

After gainful employment at these companies, Robert attended Columbia Business School, from which he earned an MBA.

Smith joined Goldman Sachs in 1994, where he made enormous amounts of money gambling on the livelihoods of Americans.

Vista Equity Partners are a venture capital firm. Smith is the founder, chairman, and chief executive. Talk about the consolidation of power...

Because they have boosted Smith's net worth to $6.08 billion, according to the Bloomberg Billionaires Index. Not a shabby number to have in the bank, is it?

And he hasn't been selfish with his wealth...

Smith is the current president of the Fund II Foundation, which invests in a number of institutions and charities such as Unicef, The National Park Foundation, and the Robert. F. Kennedy Human Rights Foundation.

And he made headlines this year with his generosity...

On May 19th, the billionaire announced that he'd be setting up a grant to wipe out the entire Morehouse College class of 2019's student-loan debt.

Morehouse is a historically black college.

Founded in 1867, the College enrolls approximately 2,200 students each year, and is the nation’s top producer of black men who go on to receive doctorates.

Smith made the shocking announcement at their graduation ceremony.

Where he told the 400-member Class of 2019 in his Sunday speech at the all-male college that he would be creating a grant to wipe all of the graduates' student debt.

He pledged to cover all their borrowed loans.

According to the press release, Smith will make the donation to Morehouse's new Student Success Program, which will in turn completely pay off all federal student loans borrowed by the 400 Morehouse students who graduated in May, nearly all of whom are black men.

He made a moving speech.

"My family is going to create a grant to eliminate your student loans," Smith said to the graduating seniors. "You great Morehouse men are bound only by the limits of your own conviction and creativity."

The total cost of his gift is staggering.

Georgia's 11Alive News reported a Morehouse official said the gift was worth about $40 million. Smith also pledged $1.5 million to the school and received an honorary degree from the college during Sunday's ceremony.

But now, he's taken his pledge even further...

Proving that he really is a great guy.

He has extended his original offer to cover the costs of graduated parents, also.

The press release explains: "The history-making grant from Mr. Smith, who announced his intention to make this grant when he received an honorary doctorate from Morehouse in May, will ease the financial strain on the Class of 2019, the billionaire’s 'classmates.' The $34 million contributions to the Morehouse Student Success Program will benefit the new alumni by allowing them to pursue advanced degrees, start careers, and build wealth without being tethered to undergraduate loan debt related to Morehouse."

He wants to give the students the freedom to pursue their careers without the worry of debt.

"With the Student Success Program in place, there is a model for all colleges and universities, starting with Morehouse and HBCUs, to receive gifts from alumni and other supporters that can offset the burden of student loans and give students the freedom to pursue their dreams, the capital to invest in the economic growth of their families and the time that they can give back meaningfully to strengthening their communities," Smith said in a statement to Business Insider.

Black families, in particular, have been affected by student loan debts for generations...

As the press release explains: "America’s student loan debt— now more than $1.5 trillion, according to the U.S. Department of Education —can exacerbate the wealth gap that exists between black families facing generational poverty and other groups. Black households nationally have the lowest median net worth, lagging behind Asian, white, and Latin Americans respectively, according to the U.S. Census. Economic status can impact loan repayments."

Moorehouse College has pledged to study the freedom of choice that alumni experience in their lives and careers when their student loan balances are paid in full or reduced to manageable levels. Other billionaires definitely need to follow in Smith's footsteps. What an amazing man.