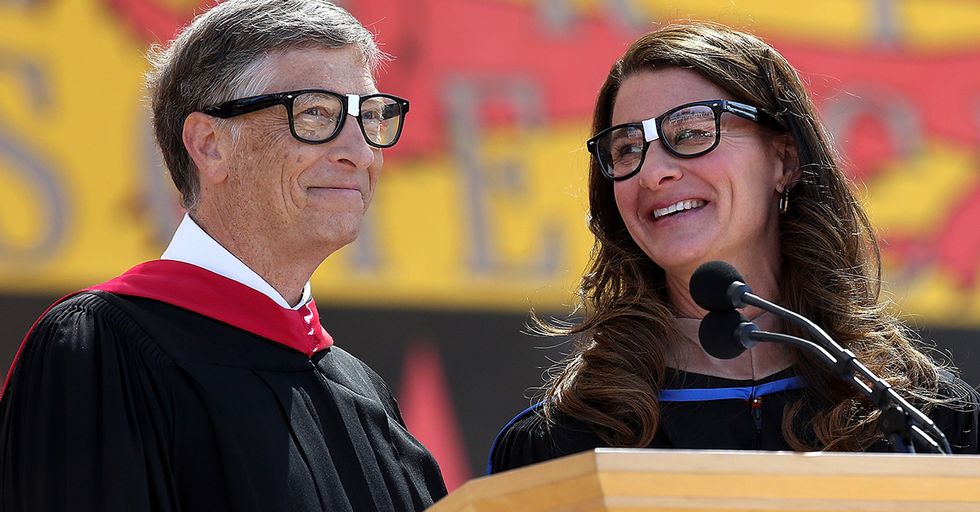 It's no secret that marriage takes a lot of work. A marriage is a partnership - it's two people coming together and choosing each other every single day. That sounds hard and daunting - but also rewarding.

There are a ton of books, blogs, and websites about sustaining a healthy marriage. There are therapy sessions and communication tools and, and, and. It can feel overwhelming. How does anybody have a long-lasting, healthy, love-filled marriage? Especially in 2019, when distraction is perhaps at its peak. It was probably easier to give your spouse attention when you both didn't have smartphones and social media.

Marriage takes work, no matter who you are. For instance, even if you're one of the richest couples in the entire world, you still have to find ways to make your relationship work. There are certain things in a marriage that need to be prioritized.

Billionaires Bill and Melinda Gates have a very particular secret to keeping their marriage working, and it's a lot simpler than you might think. Keep reading to find out what exactly it is...

Bill Gates is one of the most famous men in the entire word.

He is a co-founder of Microsoft, which launched him into billionaire status. His wealth is insane.

The 63-year-old is worth roughly $100 billion. The man is an absolute genius and a brainiac.

Gates made first place on the Forbes World's Billionaires list for a whopping 12 years in a row. Gates has been a billionaire since his early 30s.

Gates was an innovator of technology from a very early age. He started building computers when he was just 13-years-old.

While still a student, Gates founded his first company.

The company was called Traf-O-Data. Its purpose was to analyze local traffic patterns.

Gates is a Harvard dropout.

It's hard to believe someone as smart as Gates would ever drop out of school, but that's exactly what he did. He left Harvard in 1975 and co-founded Microsoft.

Gates became the youngest United States billionaire in 1987. He lost that title, however, to Mark Zuckerberg in 2010.

Not only is Gates a tech wizard and billionaire, but he's also a knight.

Because why stop at just being the richest man alive? In 2005, he was knighted by Queen Elizabeth II.

Gates is known for more than just making tons and tons of money.

He's also known for his philanthropic ventures. He has done a ton of charity and foundation work.

Gates has been married to Melinda since 1994. They met back in 1987 when Melinda became a Microsoft product manager.

25 years of marriage is a long time.

An equal balance is key in a marriage.

Especially since the Gates' run the largest charity in the entire world. Their foundation's primary focus is to end poverty.

The two of them put their ridiculous amount of money to good use.

The foundation was launched back in 2000 and is headquartered in Seattle, Washington.

Both Melinda and Bill have wildly busy schedules. Between work for their foundation, speaking engagements, and the fact that Melinda just wrote a book, they still make it a priority to do things together.
Buy Now

Melinda spoke to Business Insider about how the fact that the two wash dishes together actually points to a bigger, more important idea in marriage.

But in the context of marriage, it's a beautiful symbol of equal partnership.

Even though doing housework together may seem boring, it's actually very important for a marriage.

Melinda spoke about how this traditional housework usually falls on a woman's shoulders.

Melinda explained that on average, women spend about seven more years doing "unpaid" housework than men do. That doesn't sound very fair, does it?

Divvying up housework has many benefits.

Melinda explained that if women lower the unpaid housework they do every week from seven hours to five hours, their productivity is increased by 20%.

Sharing chores as a family and in a marriage can help strengthen the family unit.

It makes you look back on the chore chart you had as a child and think maybe your parents were onto something, right?

In Melinda's new book, she dives into what her marriage was like early-on with Bill.

While pregnant with her first child, she felt quite alone in her relationship. Her husband was the CEO of Microsoft which meant that he was hardly ever at home.

Melinda was unsure about who she was in the context of her marriage.

Melinda explained that it was through time and conversation that she and Bill learned how to have balance in their relationship.

One key part of the balance?

Washing the dishes. This act is very important for the Gates family.

It all started when Melinda got upset after dinner one day.

"One night I realized I was still in the kitchen a good 10, 15 minutes after everybody else doing the last-minute things," Melinda said to Business Insider.

She decided she'd had enough.

"Sometimes in the moment my frustration or anger just comes out. So one night we stood up after dinner and people in the family started to melt away, like, off they go upstairs. So hand on my hips, I'm, like, 'Nobody leaves the kitchen until I leave the kitchen!'"

And now, it's a tradition in her household. Eat together, do the dishes together.

The Gates' may be one of the richest families in the entire world...

But they still need to work on these together.

Washing dishes can seem so small, but it has a big effect.

It's hard to imagine someone as wildly successful as Bill Gates doing something so tedious as washing dishes, but it's a tradition in their family.

And after 25 years of marriage, it seems to be working.

Sometimes the simplest solution is the best solution. Coming together to work on household chores can have lasting effects.

The Gates family proves that it doesn't matter how wealthy you are...

If you don't have balance and communication in a relationship, you don't have much of anything. Now send this post to your partner so they get the hint to do the dishes after dinner!