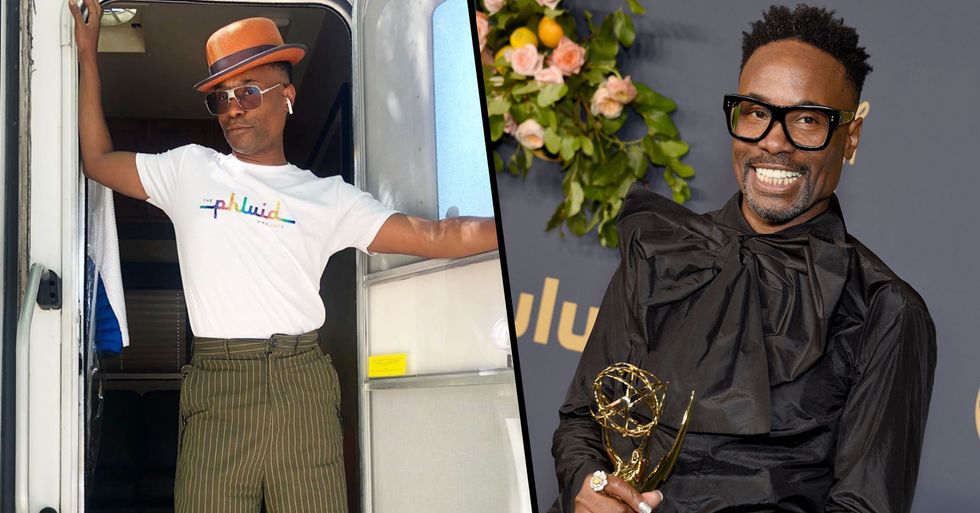 Last night's 71st Emmy Awards saw the rise of some of pop culture's most talented on-screen stars. With the night becoming a Brit-dominated playing field, we were sure that it would be near to impossible for anyone else to squeeze their way into the game.

Thankfully for us, Billy Porter, star of the TV series Pose, pulled it back by making history with his win.

Keep scrolling to hear all the details about the night, as well as why Porter is a leader in more than just the acting world.

Big-name television stars lined up in the hopes of snatching up some awards for their hard work on the little-screen.

The ceremony was dominated by the Brits.

Our friends from the other side of the pond became the highlights of the night, with Game of Thrones winning the coveted award for "Best Drama." The fantasy drama managed to get its hands on another award that night too, while also being nominated a total of six times. A job well done.

English actress and writer, Phoebe Waller-Bridge was also a big highlight from the night.

We heard her baby, Fleabag, pop up every now and then throughout the night. The British drama tells the story of a dry-humored woman who is trying to put her life back on track while dealing with tragedy.

And it seems as if it resonates with the masses.

By her third speech, Waller-Bridge just couldn't help but say what we were all thinking...

“This is just getting ridiculous!" Though it is all very well deserved if I do say so myself.

The British invasion didn't end there...

Killing Eve, the ever-so-popular British cat-and-mouse drama about a talented assassin who goes head-to-head with a tamer mI5 security officer, also claimed their award of the night.

Jodie Comer won the award for "Lead Actress" in a shocking win.

I say "shocking" purely because that was Comer's reaction when they announced her name. Not ours. Imagine playing a psychopathic assassin who can speak multiple languages while also concealing a Liverpudlian accent and not winning an award? That would bring a whole other meaning to the word tragic.

So we're all glad Comer's talents were recognized.

And we can't forget about this iconic win, can we?

Jharrel Jerome won "Lead Actor in a Limited Series or Movie" for his performance in When They See Us and the whole room was brought to tears.

When They See Us tells the emotional story of a group of men who were wrongly accused...

Back in 1990, five men known as The Central Park Five were wrongly accused of the rape and murder of a twenty-eight-year-old white woman, identified as Trisha Meili. The series tells the story of what the men faced over a twenty-five-year time span and how these false accusations completely changed their lives.

Jerome played Korey Wise, who was also present when he won the award.

Wise shed tears as Jerome paid homage to the group and each of them stood with their fists raised in solidarity. It was a truly bittersweet moment for the entire black community.

And another moment that defined the black community is when Billy Porter took to the stage.

If tolerance and diversity is what we've been fighting for, especially in the world of TV and film, look no further than this man.

In the world of media, Porter has become a pioneering leader for the LGBTQ community.

The actor is best known for his role in Pose.

Pose, a TV series that focuses primarily on New York City's African and Latino LGBTQ communities. Set in the 1980s, the show follows several queer characters in their journeys to becoming who they want to be.

And also those who society had deemed outcasts. It emphasizes the support networks around them while featuring characters who were trying to make it big in the city's underground culture.

With the show already paving historic paths of its own, it's nice to see them being recognized on the big stage.

Last night at the Emmy Awards, Billy Porter took home the award for "Lead Actor in a Drama Series" which meant that he was the first-ever gay, black man to win the award.

In his speech, he said this:

"It took many years of vomiting up all the filth that I had been taught about myself, and halfway believed, before I was could walk around this earth like I had the right to be here," Porter said, quoting James Baldwin. "I have the right, you have the right. We all have the right!"

And fans online are going crazy over the news.

We don't deserve him.

It's another win for the gays!

We're here for it. If you want to keep reading about successful black actors defying society's standards, then keep scrolling. Remember when we heard the news that Ariel in The Little Mermaid was going to be played by Halle Bailey? Yeah? Well, I've got some stunning fan art for your scrolling pleasure! Enjoy!