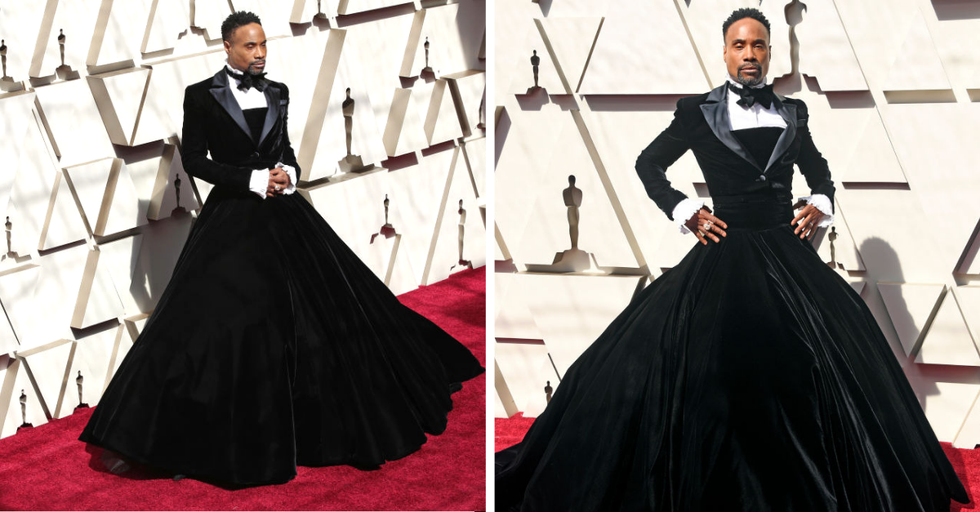 Billy Porter, star of hit television show Pose, subverted expectations by wearing a tuxedo gown on the Oscars red carpet tonight. The custom gown was designed by Christian Siriano and was actually a two-piece outfit made up of a strapless gown with a tuxedo jacket over top.

The outfit felt like a fun wink to the gender-normative tuxedos worn by every other man on the carpet, but according to Porter, there was a deeper, more poignant reason he chose to wear it.

He chose to say something with his clothing choice.

Porter told Vogue, "I’ve always been inspired by fashion. My grandmother, my mom—they were always stylish. I grew up loving fashion, but there was a limit to the ways in which I could express myself. When you’re black and you’re gay, one’s masculinity is in question. I dealt with a lot of homophobia in relation to my clothing choices. [Even] when I had my first working contract at A&M Records, I was silent for a long time. I was trying to fit in to what other people felt I should look like. When I landed a role in Kinky Boots, the experience really grounded me in a way that was so unexpected. Putting on those heels made me feel the most masculine I’ve ever felt in my life. It was empowering to let that part of myself free."

And we are absolutely blown away.

He continued with, "Now I’m in a space where, being on Pose, I’m invited to red carpets and I have something to say through clothes. My goal is to be a walking piece of political art every time I show up. To challenge expectations. What is masculinity? What does that mean?"

We stan a fashion icon who not only breaks down gender barriers but has a point to make. Bravo, Billy! We salute you.

But wait, we're not done.

You need to see a few more angles of this incredible outfit.

And also in black and white.

The confidence, the smile, the VELVET. In the words of George Costanza, "I would drape myself in velvet if it were socially acceptable."

And one last look for good measure.

Kudos, Billy. Keep on rocking it!