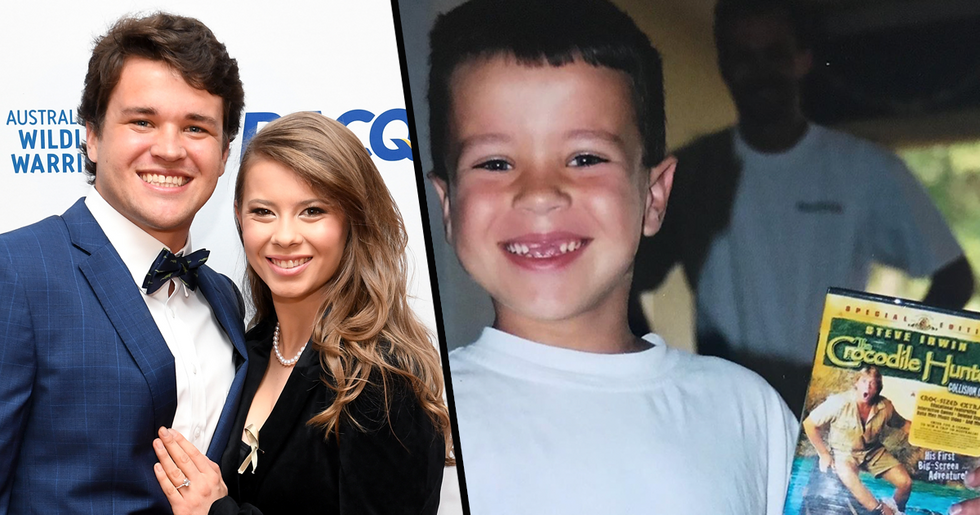 Bindi Irwin, the surviving daughter of the "Crocodile Hunter" Steve Irwin, has shared an adorable photo of her husband, Chandler, watching Steve's TV series as a child.

If this isn't proof they are true soulmates, I don't know what is...

And, as a little girl, she would regularly feature on his documentaries.

And, at just 8 years old, Bindi read out a moving eulogy during her dad's memorial service.

The pair met when Chandler, who's originally from the States, was visiting the zoo while in Australia for a professional wakeboarding competition.

The childhood sweethearts are quite literally a match made in heaven. Chandler exhibits the same passion for animals as the Irwin's and now works with Bindi and her family at Australia Zoo in Queensland.

Announcing the exciting news, Bindi wrote on her Instagram: "July 24th, 2019… On my birthday I said ‘yes’ and ‘forever’ to the love of my life. Chandler, close to 6 years ago I fell in love with you and every day since has been a whirlwind of adventure and true happiness. I’m so looking forward to spending our forever together as your wife. Here’s to a lifetime of friendship, purpose and unconditional love. — Now let’s get married already!"

They had no guests due to the recent restrictions from the ongoing medical pandemic...

But now, it seems that their relationship was meant to be before they had even met.

Bindi recently took to Instagram to share a photo of Chandler as a child that shows him watching The Crocodile Hunter.

It turns out that Chandler has always held a special place in his heart for the Irwins...

Even before he met his wife.

Bindi posted a photo of a young Chandler clutching onto a DVD case of The Crocodile Hunter...

Where she wrote, "This makes my heart so happy. My sweetheart husband has watched Dad’s documentaries since he was little." She shared a second photo of him as an adult, still holding onto the DVD.

They truly are a match made in heaven.

And, what's more, Chandler and Robert seem to be the best of friends. For more on Bindi's little brother, keep scrolling...