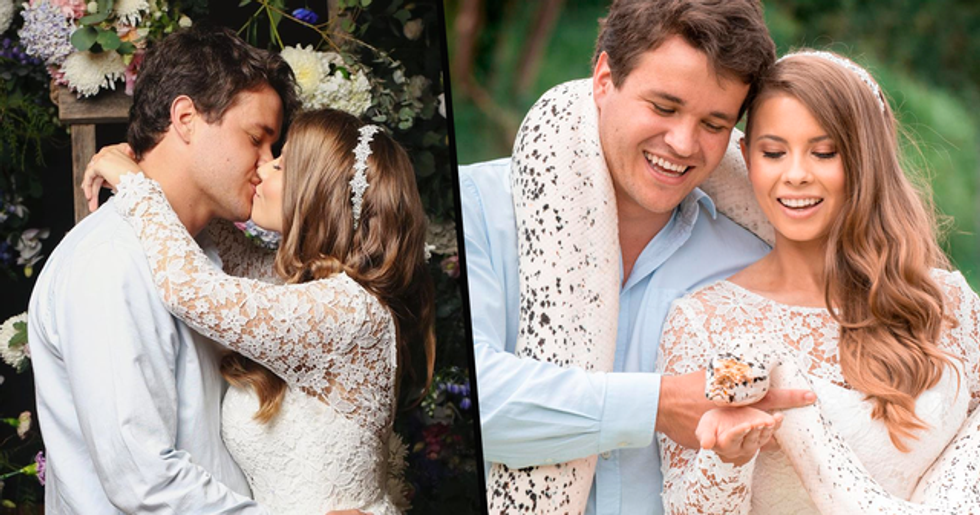 Bindi Irwin has just shared a beautiful piece of artwork that shows what her wedding day would have looked like if her late father, Steve Irwin, was able to attend...

The Irwin family has kept Steve's legacy alive through their important work at his pride and joy, Australia Zoo.

They've now been together for almost 7 years.

Bindi and Chandler were gifted with an incredible piece of artwork that gave them a look at a complete family wedding portrait.

Digital artist, Debb Oliver, met the family in person to give his belated wedding present.

His painting shows the family, all smiling on Bindi's wedding day, with Steve painted into the center, his arms around his daughter, and his wife, Terri.

Bindi shared a photo of herself, Chandler, Terri, and Robert standing around the beautiful artwork, with the caption: "'To live in hearts we leave behind is not to die.' ― Thomas Campbell. Thank you @the_monkey_brush for creating this spectacular piece."

She shared a closeup of the painting...

Writing: "My family. Our wedding day. This artwork gave me happy tears. Thank you to ‘The Monkey Brush’ for creating such a beautiful piece, it means the world to me."

For more on the beloved Irwin family, keep scrolling...

Amazing Amazon Deals You Won't Want to Miss This Month