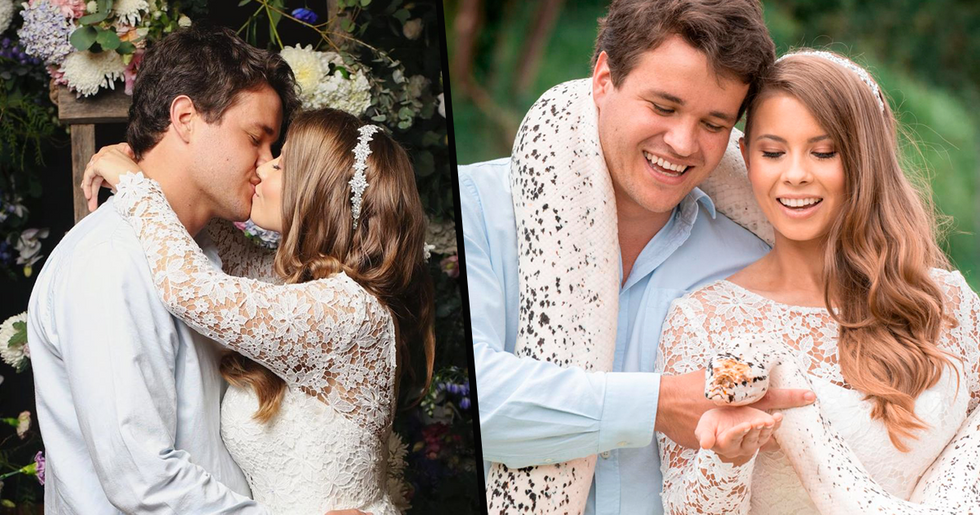 Bindi Irwin and her husband, Chandler Powell, recently tied the knot in a private and secluded ceremony at Steve Irwin's beloved Australia Zoo.

But now, the couple have released footage from their big day in a wedding special of Crikey! It's the Irwins, and fans have been left furious at one thing...

Announcing the exciting news, Bindi wrote on her Instagram, "July 24th, 2019… On my birthday I said ‘yes’ and ‘forever’ to the love of my life. Chandler, close to 6 years ago I fell in love with you and every day since has been a whirlwind of adventure and true happiness. I’m so looking forward to spending our forever together as your wife. Here’s to a lifetime of friendship, purpose and unconditional love. — Now let’s get married already!"

So far, the couple have kept any further details from their special day on the down-low...

And have only shared a handful of photos from the ceremony... Which are stunning, by the way.

But they recently had a huge surprise for their fans.

Their wedding had actually been filmed, and was going to feature in a special episode of Crikey! It's the Irwins. It sounds too good to be true, right?

Well, many of their Australian fans aren't happy.

Because, despite their ceremony being filmed in Australia, and the Irwin's being Australian National treasures, the Oceania country will be the last to air the episode.

The episode has first being aired here in the States...

And other countries such as the United Kingdom, Taiwan, and South Korea will all get to watch the wedding before Australia does.

So, quite understandably, Aussie fans are pretty put out by their decision.

Surely Australians should have the right to see their wedding before the rest of the world?

The online backlash has been endless.

It isn't exactly what a newlywed couple needs, is it?

They were eventually forced to respond to the anger and confusion.

Chandler wrote: "Hi guys! Thank you to everyone who tuned in. Programming is out of our control as Animal Planet decides when to air the show. We will keep you posted as we find out more air dates!"

It turns out the dates are completely out of their control...

Bindi's mom, Terri, weighed in on the situation herself, and promised to enquire about the Australian dates. "We don’t have an answer for that, as @AnimalPlanet is in charge of working through the scheduling for more than 200 countries and territories around the world. We would love to see the wedding special on earlier in Australia. We’ll pose the question and let you know!"

Terri even took the time to reply to various other Twitter users' inquiries...

And gave a personalized message to each person depending on their country.

We can't wait to see the footage from Bindi and Chandler's wedding.

And for those of you still complaining... Give the young couple a break! For more on the much-loved Irwin family, keep scrolling to see how Robert is spending his quarantine time...