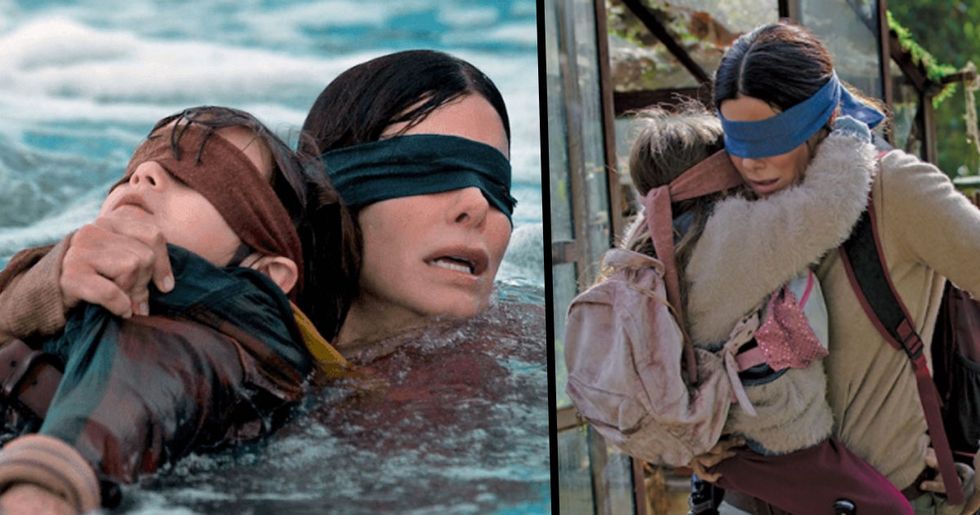 'Bird Box' Has An Alternate Ending And It's Seriously Dark

The recent Netflix movie, with monsters that drive people to kill themselves when you look at them, has got the whole internet terrified. Everyone is buzzing about what life in a blindfold would be like. It has even led to some crazy challenges where people are posting themselves doing daily tasks blindfolded.

One thing we can all agree on is that the movie was pretty dark. Even the ending, which is possibly the only ounce of positivity in the whole thing, isn't exactly a barrel of laughs.

But it turns out the movie almost had an even more sinister ending. The 2014 novel it was based on had a dark twist that the filmmakers decided to change.

I don't know about you, but after that roller-coaster of a journey, I'm glad they did.

You have probably heard of Bird Box by now.

Bird Box has taken the world by storm. If you haven't seen it, you must have at least seen some of the discussions it has sparked online. The Netflix film, starring Sandra Bullock and Trevante Rhodes, reached a record-breaking 45 million views in just the first week.

You know that post-apocalyptic movie with crazy monsters that make you kill yourself when you look at them?

If you need a re-cap, the story follows Malorie (Bullock) in a world that has become overrun with monsters. Oh and when you look directly at these monsters, you kill yourself. Or go completely insane. Hence why suddenly everyone has to wear blindfolds and stay inside.

The one that is filling up the internet with memes.

It seems the movie's concept struck a chord with the public. Bird Box has sparked a barrage of hilarious memes across social media. At least they are providing some light relief after the nail-biting ordeal of actually watching it.

And memes about memes.

Well the ending of the movie presents us with a ray of hope in an otherwise bleak world.

Although, not a completely happy ending, the movie doesn't leave us completely downhearted. Malorie and her kids surviving and reaching relative safety.

Which had a mixed reaction from fans.

The ending of the film has sparked some controversy. Some viewed it as happy, while others disagree. Many fans were disappointed they didn't get answers to what the monsters were, where they came from, or if they could be defeated.

But whatever you thought of the movie, did you know there was an alternate ending?

What viewers of the movie didn't know is that they almost had an alternate ending. It had a much darker twist to the Netflix ending we saw.

You might not have realised, but Bird Box was based on a book by Josh Malerman.

Bird Box was actually adapted from Malerman's 2014 debut novel. The movie stayed fairly true to the book until the last turn.

So the book had a slightly different ending. And it is dark.

I suppose we shouldn't be surprised that the person that came up with the Bird Box concept wrote a dark ending. But why didn't Netflix chose to follow it?

In the movie [Spoiler alert], after spending four years hiding out in a house in the woods, Malorie and her kids undertake a terrifying journey down the river. Blindfolded.

The film begins with Malorie and two children making a terrifying journey down the river. Throughout the movie, we slowly learn hat has happened through flashbacks to the last five years. We discover she has received a call inviting her to join a community of people living in safety.

After overcoming a crazy stranger, deadly rapids, and the monster’s tricks they eventually reach a safe haven.

The harrowing journey has a number of close calls. Malorie beats off a crazy stranger and navigates through some deadly rapids in a rowing boat. We see the monsters do their worst by mimicking voices of the characters loved ones and taunting them to remove their blindfolds. Eventually though, they make it to the safe place.

It turns out to be a school for the blind who were saved as they couldn’t see the monsters.

The happy movie twist is that they have arrived at a school for the blind. The blind were all saved from the monsters as they couldn't look at them.

And now they are helping others, how nice.

It seems they have now opened their community to everyone and are helping to protect others. The last scene ends with birds chirping, and people in an open space, smiling and talking to each other.

In Malerman’s novel, Malorie still ends up in a community of people that have survived because they can’t see.

The book still ends with this idea of optimism as Malorie still reaches a safe place. But there is something much more sinister about it.

But they have blinded themselves to save themselves from the monsters.

In a much darker twist of fate, the people who have survived have blinded themselves to protect themselves from the monsters. As if we didn't have enough violent and painful imagery going on.

Malorie even cries and asks that they don’t blind her children.

The book also describes Malorie's terror on seeing this sight as she begs that they won't do the same to her children. Does she have to worry about both people and monsters now? As it happens they say they don't do this anymore. PHEW.

The director of the movie, Susanne Bier, commented that she preferred to end her movies optimistically.

The mirror posted about Susanne Bier’s preference for ending her movies with a hopeful note. She didn’t want to abandon that trend and so changed the ending.

So that people don’t feel too bleak at the end of the movie.

She said: “I’m not particularly interested for the audience to leave, from the cinema or their own screen, with a kind of completely bleak point of view. That’s not really what I believe in."

The novel explores various themes such as human understanding, ugly truths, and isolation.

If you have any questions after watching Bird Box perhaps giving the book a read will help. The monsters in the book seem to represent things humans cannot understand or don’t want to acknowledge.

The idea for the novel is classic example of something called the Garrison Mentality.

The Garrison Mentality, a phrase coined by Northrop Frye, a literary critic, refers to the claustrophobia and isolation people feel in an army outpost out in the wild. Although Malerman may not consciously allude to this, Bird Box is a perfect example of it. Characters who experience the Garrison Mentality fear the oppressive immensity of their surroundings. They build walls to keep the danger out but also end up closing themselves in.

Malerman wrote fourteen other novels that were never published.

Malerman, a novelist and singer songwriter for the band High Strung, actually wrote 14 other novels. He would work on them during long journeys on tour with the band.

There could be a dark ending for real life Bird Box viewers as the #BirdBoxChallenge could pose dangers for fans.

A new craze the Bird Box Challenge has seen fans of the movie filming themselves doing daily tasks with blindfolds on and posting it to the internet. People are worried we might see a wave of injuries, or worse, from this trend.

There have been hundreds of partakers as well as much discussion about it on the internet.

There is much debate about whether the trend is funny or stupid. That hasn't stopped a lot of people getting involved.

It starts at home. This particular video of a child running into the wall while blindfolded at home has gone viral.

And has extended outside. People have been walking around town blindfolded and even running races.

Playing some after school sports.

It has led to people doing more and more impressive things blindfolded. How about shooting some hoops, and actually making it.

Netflix has issued a warning of the dangers.

It actually led to Netflix having to release a statement asking people not to take part in the challenge. They are concerned that it could lead to injuries.

And people have raised moral issues about whether doing the Bird Box challenge could be offensive to the blind.

It has opened discussions about awareness around the blind. Does it perpetuate ideas that blind people, who function perfectly in society every day, cannot do basic household tasks?

Someone has come up with a way to do the challenge and avoid the dangers.

Anyone who loves to sleep a lot could follow the example of this girl. It looks like she successfully went about her daily business in a "blindfold" for hours.

So of the two endings, which one do you prefer?

Do you prefer the movie ending? Or are you partial to the dark and sinister twist in the book?