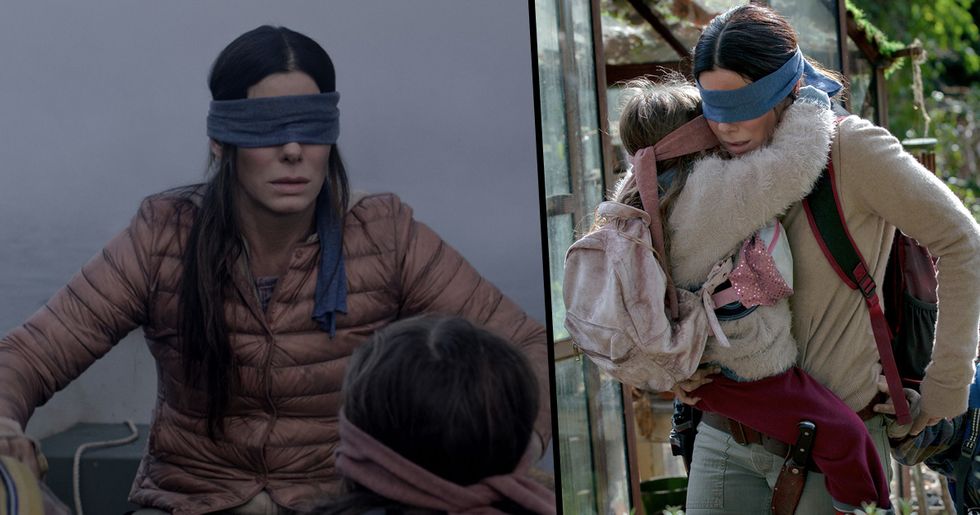 New Netflix original film Bird Box has been a roaring success (we’re talking a record breaking 45 million account views in just seven days). The thriller is set in a post-apocalyptic world which has been taken over by terrifying monsters. Anyone that looks at them seems to suddenly kill themselves.

The movie’s suspenseful plot line and star-studded cast, Sandra Bullock plays the lead Malorie, have enraptured the general public. Just look at some of the many memes that have sprung up all over the internet.

People have been pondering about the mysterious monsters. What are they? Where did they come from? What do they look like? Are they invisible?

But some fans, who have paid close attention to detail, claim to have spied a couple glimpses of the monsters after all. What is it they spotted?

The monsters in Bird Box are pretty scary.

Everything about these monsters is scary. You know when they are coming because leaves start ominously blowing around and birds start flapping. They seem to be everywhere and they mimic the voices of your loved ones.

Any character that looks directly at them violently commits suicide.

As soon a you set eyes on one you are instantly compelled to kill yourself. After, we think, realising your worst fear.

But one the things that makes them most terrifying is that we, the audience, never see them.

We never get a direct shot of the creatures. Not even at the end. It means there could be no limit to their terribleness.

In fact, we are never quite sure if they are a tangible shape or some kind of spirit.

As we are never properly shown the creatures, only wind and leaves blowing and ethereal noises that appear as if from nowhere, its plausible the creatures are shapeless entities or spirits.

And never seeing the monsters has left some viewers disappointed.

Many Twitter users have complained that the failure to tie up certain questions about the monsters felt anti-climatic. You can't please everyone.

Bird Box's director Susanne Bier said in an interview with Slashfilm: "I pretty much feel that with creature movies. I pretty much kind of go, and they can be amazing, I recognize they are amazing but there’s always a part of me that goes, 'I’m not scared now. I’ve seen it.'"

But some attentive fans have noticed that there are actually two moments in the film where we do catch a glimpse of the creatures.

If you were watching carefully, you might have spotted these nods towards the creatures that appear briefly in the movie. And possibly a clue to what they look like.

One is when a silhouette of the monster passes by a window.

A silhouette of one of the monsters passes by the window of the house in which Malorie is hiding. Although it doesn't give much away, its the closest glances we get to one of the creatures. It's proof that there really is something out there.

The other is through the drawings scribbled by Gary.

Gary is friendly English man who joins a group of people sheltering inside a house away from the monsters. He turns out to be tricking his peers, having already looked at the beasts, but being one of a select few people who react differently to them. Not dying but praising their beauty and forcing others to look at them. He produces a bag full of dark sketches detailing intricate depictions of monsters. These are what fans suspect are the creatures.

They depict the monsters with dark cavernous eyes and a tentacle covered face.

Although just an interpretation of the monsters, this is the closest we get to idea of what the monsters look like. Dark, black, soulless holes for eyes and a face full of tentacles. I'll stay inside thanks.

As this Twitter user points out, we could be seeing the whole ecosystem of the monsters in these drawings.

And there are so many scribbles and drawings it seems like there could be a whole host of monsters. If we had hours of time to analyse the drawings maybe we could resolve lots of unanswered questions about them.

Although it doesn't explicitly say Gary's drawings are of the creatures.

The film doesn't explicitly say the drawings are of the monsters. But if not, then what the hell are they of?

If the monsters made him go mad could the drawings be of his own demons?

Gary forms part of the group of people that don't die when they look at the monsters. It is suggested these people might have mental health issues, or are clinically insane. Perhaps if the creatures induce peoples worst fears, or Gary already had mental problems, the drawings could be of his own demons.

Some fans have compared Gary's depiction to mythical creature Cthulhu.

This comparison refers to a short story by H P Lovecraft about a mythical creature called Cthulhu, who was a huge entity worshipped by cultists. He is supposed to look like an octopus, dragon, and caricature of human form.

And the premise of the film has also reminded many of A Quiet Place.

Bird Box fans haven’t failed to notice the similarities between 2018 John Krasinski and Emily Blunt movie A Quiet Place. The film is also set in a post-apocalyptic reality with monsters with super sensitive hearing rendering its inhabitants silent, rather than blind.

It turns out the makers of Bird Box initially planned to include some shots of the monsters in the movie.

The film makers originally planned to include a scene with a face to face interaction with the monster and Malorie. They even created a prototype to film with.

But it didn't make the final cut.

The scene was eventually abandoned in favour of never exposing the monsters. It didn't work the way they had hoped.

Essentially for being too comical.

The monster they had made made everyone on set laugh instead of scream. Not quite what they had hoped. “It so easily becomes funny. We actually shot that and spent a lot of energy on, but every time I saw it, I was like this is not going to be tense. It’s just going to be funny." said Bier in an interview with Bloody Disgusting.

So when the filmmakers planned to include the monsters, what were they supposed to look like? Well, let's find out.

Apparently the monsters were going to be snake-like.

The prototype monster they made for the scene was long and snake-like. But still the shape of a man.

I suppose green is a typical monster colour. Maybe not the scariest colour though.

Heisserer described it as looking like a long fat baby.

Eric Heisserer was the screenwriter for Bird Box. He described the attempted scene: "It’s making me laugh. It was just a long fat baby."

Sandra Bullock couldn't look at the monster without laughing.

The film makers described Sandra Bullock's reaction to the monster while filming. It turned quickly from worrying about being scared, to laughing. Bullock described the monster as "a green man with a horrific baby face."

The show even plans to send the monster to Saturday Night Live.

“We’re going to deliver it to Saturday Night Live," Director Bier joked in an interview. Keep your eyes peeled.

Although the decision not to include them also had to do with allowing the viewers imaginations conjure their own ideas.

The decision to not show the monsters allows every viewer to imagine their own version of the monster. It means no-one can be disappointed by the interpretation.

As everyone has different fears.

“Whatever those beings are, they tap into your deepest fear," the director said. “Everybody’s deepest fear is going to be different from the other person. I think to suddenly take upon a concrete shape in order to illustrate that becomes weak. Where the conceit is really strong, then trying to illustrate it is kind of almost meaningless. So it would have been the wrong decision." Bier  added.

After the leaked info about the monsters, one Twitter user has been guessing how the original creatures looked.

Social media has been buzzing with memes and discussions about the monsters in Bird Box. Could this guess be accurate?

Or perhaps this one. Although nobody mentioned hair.

For a minute we thought the monster was wrestler John Cena thanks to a cheeky Wikipedia user.

A joke update to Wikipedia briefly listed John Cena as the actor playing the monster. The WWE wrestler and actor is known for the catchphrase “You can’t see me", sparking some hilarious tweets about why we never saw him (the monster) in the movie.

But maybe this Twitter user is right and all this worry about the monsters in today's world is irrelevant.

Yeah you, reading this article on your phone as we speak. Would you look up and see the monsters?