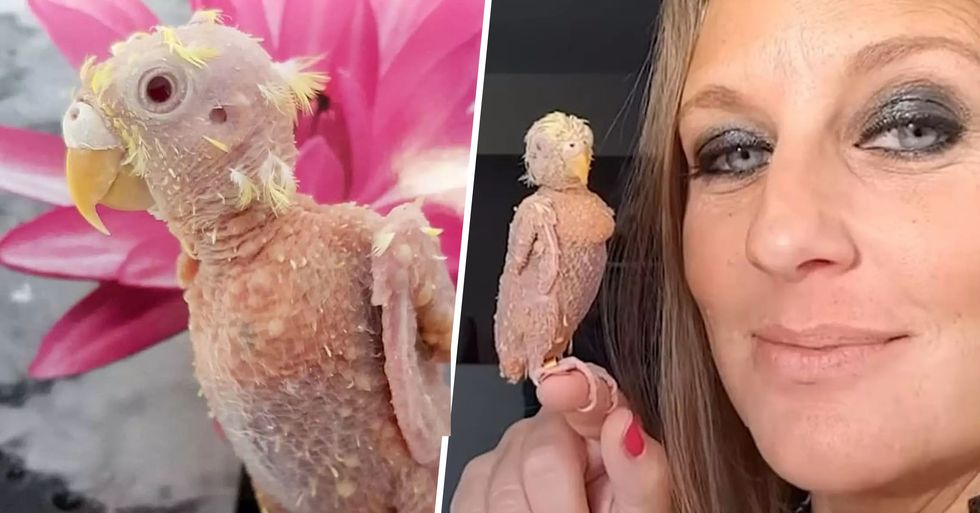 It is a devastating reality that millions of animals around the world suffer at the hands of us humans.

There are some truly evil people out there who inflict pain and cruelty upon innocent animals, but for the amount of evil comes the amount of good.

Keep scrolling to learn about the kind woman who adopted a bird who can no longer grow her feathers due to stress...

Some people just aren't fit to own pets...

There are more good people out there than there are bad.

Nardjara is from the Netherlands and 2 years ago, she took in a new pet - a little budgie named Coco.

And as you can see, the poor little bird is missing a lot of her feathers.

Coco lived a very stressful life under the hands of her previous owners...

And as a result of the severe stress she endured, she developed a disease called PBFD (psittacine beak and feather disease).

This disease is extremely contagious amongst birds...

And it affects the beak, feathers and immune system of birds belonging to the Psittacidae family.

The disease has the potential to be deadly...

According to Pet Coach, PBFD was first recognized in 1975 by veterinarians in Australia, where the disease affects wild birds. "Although birds showing signs of disease usually die, it is common for birds to be exposed to the virus, develop a mild infection, and recover."

And luckily for Coco...

She was cared for amazingly in order to recover.

However, the condition has left Coco unable to re-grow her feathers...

And she is now almost completely bald.

Coco can no longer fly...

But thanks to the love and care from Nardjara, Coco is in very good spirits and she is no longer suffering from severe stress.

Coco now appears to be oblivious to her condition...

And she now even has a roommate - Blue, who is completely intact of his feathers.

"Coco's feathers can't grow. The disease attacks her feather follicles and prevents them from growing," she explained. "Sometimes she has the tiny head of breast feathers that grow a little bit, but they fall off really quickly."

Coco is extremely lucky to have such a caring owner...

"I take care of Coco. My house is always warm, I love her with all my heart and I do my best to try to give her the best life possible," she went on to say.

We're just happy that Coco is now living in a protective and peaceful home...

Keep scrolling to learn about the parrot who received a new pair of wings from a kind veterinary surgeon...