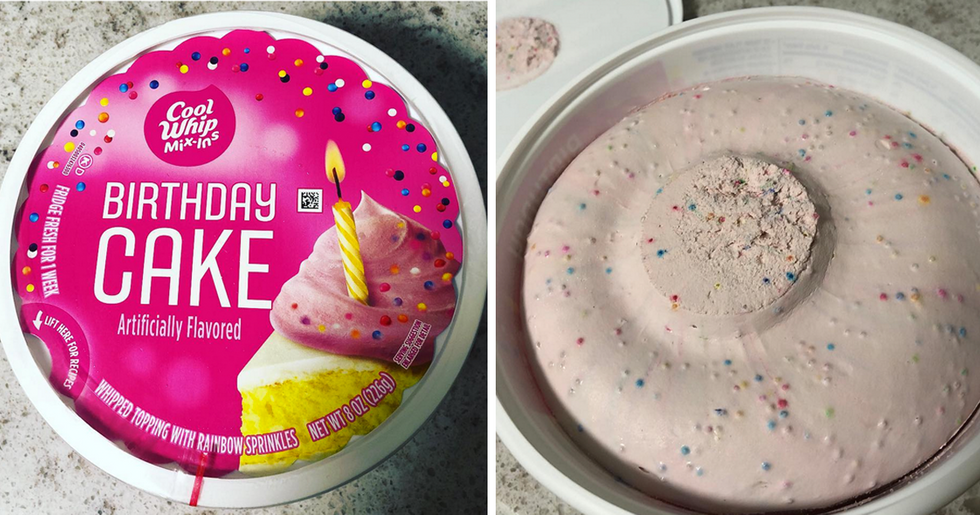 You don't need to be a baker to love Cool Whip - the infamous whipped cream alternative which has proved itself over and over again.

The must-have for every dessert has achieved impressive success since its invention in the mid-twentieth century.

It has gone through several modifications, both inside and out so we could enjoy the various types and flavors it offers today - from classic vanilla to peppermint to sweet cinnamon.

Last year, the brand also introduced the oreo cookie flavor which truly took over the world.

But recently, a new flavor called birthday cake started to pop up in stores across the country.

But not everyone was happy.

Read on to find out what made Cool Whip famous, how it's related to Family Guy, and what people have said about the Birthday Cake.

Cool Whip is one alternative to whipped cream though it's not much healthier.

It imitates the classic but isn't made of whipped cream at all, according to The Daily Meal.

It's sold by the Kraft Heinz Company and is mostly used as a topping for anything from cookies to cakes.

Cool Whip is also often used as a dip and cake frosting. (Although the new birthday cake flavor can even be eaten alone.)

If you read the word "alternative" and thought it was vegan, well, it's not.

At the moment, Cool Whip contains a small amount of dairy. However, it wasn't like that when it first came out in 1966. Did you know that it's scientists that come up with new food products?

But another scientist, Bill Mitchell, who also invented Pop Rocks and Tang, acquired a patent for it first.

Cool Whip was then mass-produced by General Foods, which was later bought out by Kraft.

The product had a huge advantage over its competitors because it could be distributed frozen.

It only went non-dairy-free in 2018, when Kraft decided to start adding small amounts of skim milk and heavy cream to it. Here are some other fun facts about Cool Whip that I bet you've never heard of.

It didn't always come in a tub.

Delish says Cool Whip used to be sold in a "'swiggle' decorating canister that let you pipe designs onto your cakes."

Cool Whip only became popular thanks to the Watergate Salad.

Also known as Pistachio Delight, the 1975 recipe uses the whipped topping as its main ingredient.

Cool Whip inspired one of the classic Family Guy jokes.

Remember when Stewie kept pronouncing Cool Whip as "Coolw Hip" and it really got on Brian's nerves?

There are 8 different types of Cool Whip.

You can now find it in Extra Creamy, Lite, Fat Free, Sugar Free, and Season's Delight, according to Delish.

Cool Whip used to be advertised as an inseparable companion of Jell-O.

Ads in 1974 usually offered "two-for-one" deals on the two products, both of which were owned by Kraft.

Cool Whip and pudding has been one of people's favorite combinations.

Especially in the '80s, when pudding pops, dirt cups and mud pie were on every dessert table.

The Cool Whip jingle was created in the '90s.

That catchy song "Do the Cool Whip" was released in 1999.

Can't blame them though. Just looking at all the photos of it on Instagram makes you see stars.

However, they've narrowed it down to top 5 best recipes.

And since March 2018, Oreo cookie is part of the list too. The new addition took over the world. (That is, until now as Birthday Cake is making its way through the country's food stores.)

The user had found the new flavor at a Safeway, but in which state it's still unknown.

No one even knew when the new flavor hit the stores.

Since it's doing the same thing with the Birthday Cake, it seems like the company is doing it on purpose. Letting the fans discover them first then share it on social media.

The Oreo flavor is still available in some stores.

According to Delish's Google search, you can still order them online via Instacart.

Cool Whip fans are now all about the new Birthday Cake flavor.

Its official release date is unknown but some shoppers have already spotted the boxes popping up in grocery stores. Instagram user The Junk Goat found it last Saturday at Schnucks.

Later, they also shared a photo of what the new flavor looks like on the inside and it sure is something to celebrate.

Most fans were excited to try out the new flavor themselves.

But not all. After one unhappy shopper commented: "What could you use this with?!?" The Junk Goat replied with a witty "a spoon."

The Epoch Times says Birthday Cake has one big difference from all the other Cool Whip flavors.

It can be eaten on its own, straight from the tub. Cool Whip knows us so well...

It's also got the "I can't stopping eating it's so good" factor.

Cosmopolitan wrote, "I’m a firm believer in treating each day like it’s your birthday because life is short and you should eat the damn dessert, right?"

"Next up on my list of celebration treats is this Cool Whip birthday cake flavor."

Other social media users say they're willing to pause their diets just to have a taste of Birthday Cake, The Epoch Times reports.

Melissa Amanda Tuchalski wrote: "I’d like to take a second to mourn the death of my diet Jan 2019—April 2019."

Heather Hornak said: "It cancels out the bad stuff if you dip healthy stuff in it right? Like if I eat it with celery, it’s technically healthy, right… right?"

Katherine Dixon said: "Rhonda Dixon I know what I want instead of a birthday cake this year."

Lisa Kent hoped the new flavor will soon be available overseas too: "Can we get cool whip in the UK please. Was out briefly then it stopped."

Still, not everyone was happy with the whipped topping's color and standalone promise.

Cassidy Klein wrote: "They kind of need to work on the color of the cool whip. That vomit color is not appealing. Either keep it white or make it yellow cake colored."

Desiree Deitz wrote: "So it's just Cool Whip with sprinkles and pink coloring?"

Samantha Baker said: "Wait the tub of Cool Whip by itself isn’t a dessert."