Yellowstone National Park is the home to many wild bison... | 22 Words 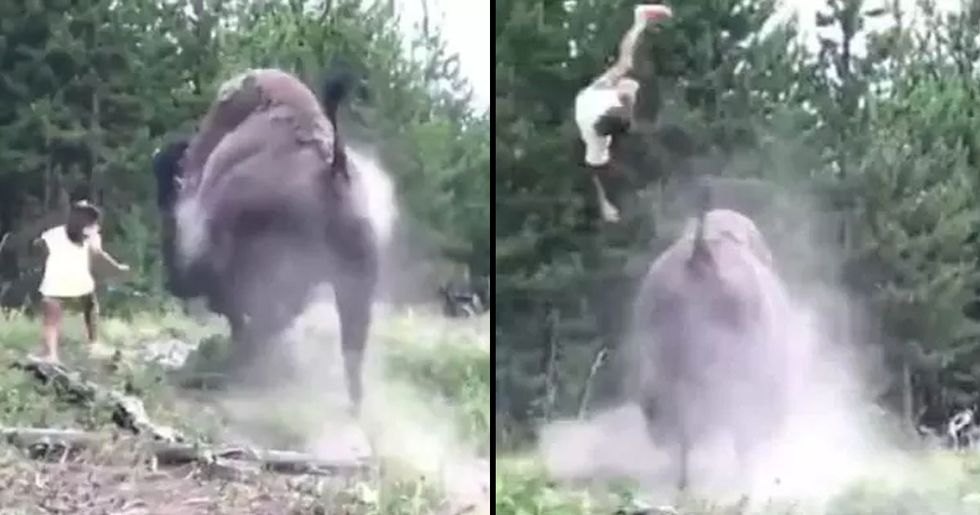 No matter how much the unpredictability of wild animals is stressed, people seem to take no notice and get up close and personal with nature despite the warnings.

Wild animals need their own space, and many species can be extremely territorial, which makes them especially harmful towards us humans.

Recent footage has emerged of a wild bison charging at a group of tourists, and the consequences are horrifying.

Keep scrolling to learn the fate of the 9-year-old girl who stepped a little too close to nature and to watch the shocking footage of the incident.

To state the obvious... Bull Bisons are pretty scary.

More commonly known as the American Buffalo, bison are found in mountain locations and river valleys across the Americas, and can weigh up to a staggering 1,000 kilograms.

Bisons are one of the most dangerous animals in North American national parks...

They are a popular species that migrate in national parks, and they are also one of the most dangerous. They are easily provoked, and they have been recorded to run up to speeds of forty mph - meaning they can easily outrun us humans and cause a lot of damage.

By which we mean, they can cause some serious damage...

Between 1980-1999, statistics found that more than 3 times as many people in national parks were injured by bison than bears. This period saw seventy-nine people get seriously injured by a charging bison, with injuries including bruises, broken bones, and goring puncture wounds.

They're not as cute as they look.

So maybe it's wise to stay well clear from a bison if you encounter one.

Yellowstone National Park is the home to many wild bison...

Yellowstone is located in the states of Montana, Wyoming, and Idaho. It stretches for a staggering 3,472 square miles and homes a lot of wildlife.

The seasonal park brings in hundreds of thousands of visitors every year...

Yellowstone has acknowledged the fact that they home numerous species of dangerous wildlife.

Via the Yellowstone website, it has been acknowledged that wildlife such as bears, wolves, and bison can be encountered and can be extremely dangerous, especially when approached by humans. They warn guests to never approach an animal, to always remain at least 100 yards back, and they remind us all that it is, in fact, illegal to disturb the peace of a wild animal.

Yellowstone is a popular area for families and children.

A video was uploaded to Twitter on Monday of this week but was deleted after it very quickly went viral. It showed a bison wandering alone on a grassy hill, and you can instantly see how close the person filming the footage is to the wild animal - they were definitely within a mere few feet of it.

The bison very quickly picks up its pace...

The short clip begins with the bison sniffing the grass when it suddenly begins to charge towards a group of people hovering nearby - who instantly begin to panic and scream.

As the crowd of people scatters...

A young girl is spotted running alone, which instantly makes one wonder why on earth she isn't with an adult... The bison seems to make a beeline for the girl, who is seemingly oblivious as to what is about to happen.

The powerful animal very quickly caught up with the child...

And with a swift toss of its head, the young girl went flying through the air in a somersault motion. People are heard screaming and shrieking "oh my god" as the girl tumbles back to the ground.

The shocking clip racked up around 4 million views...

On Tuesday, the National Park Service confirmed that the child was a 9-year-old girl from Florida, and the bison involved was an adult male in the Old Faithful Geyser area.

The group of people were dangerously close to the bison...

According to the Washington Post, the National Park Service issued a news statement in regards to the accident. "According to witnesses, a group of approximately 50 people were within 5-10 feet of the bison for at least 20 minutes before eventually causing the bison to charge the group."

"The girl’s family took her to a nearby lodge where the park’s emergency medical providers treated her for unspecified injuries," the statement went on to say. The girl is expected to make a full recovery, but the extent of her injuries is unknown.

The video has opened a lot of eyes...

Despite park regulations warning visitors that it is prohibited to "willfully remain near or approach wildlife, including nesting birds, within any distance that disturbs or displaces the animal," the young girl appeared to have been left by herself when the rest of the group got themselves out of the bison's way.

Why do people feel the need to get up close and personal with these wild animals?

“Wildlife in Yellowstone National Park are wild," the release noted. “When an animal is near a trail, boardwalk, parking lot, or in a developed area, give it space."

It really isn't that hard, folks...

“Every year, there are regrettable accidents caused by people getting too close to these massive animals," the Park Service said. “It’s great to love the bison, but love them from a distance."

A study conducted in 2018 examined the cases of twenty-five people injured by bison over the last fifteen years, and it was found that, on average, the people injured were all within eleven feet of the animal. So they were pretty much asking to be attacked...

A sad reality of human nature...

“Education alone might not be sufficient to reduce bison-related injuries," researchers wrote. If this horrific incident doesn't teach us humans to simply stay away, I really don't know what will.

What will it take for people to learn?

Will it take someone to lose their life to a bison for people to learn to simply keep their distance from these wild animals? All we can do is hope that certain people put aside their ignorance and selfishness, and put safety and respect first. These kinds of stories are always sad, but, sometimes, the internet rejoyces. Such was the case when one poacher was trampled by elephants before being eaten by a lion... Keep reading for more on that story.