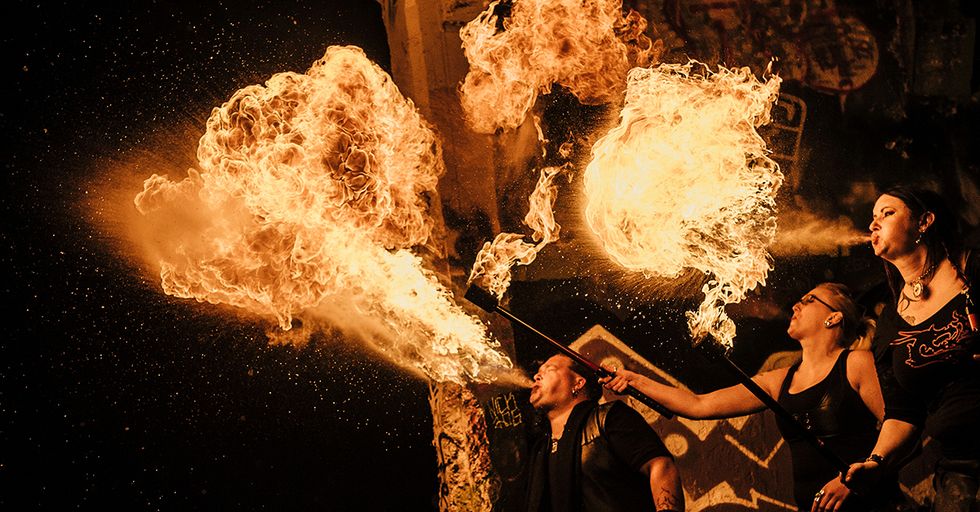 Are you ready for some draaaaamaaaaa?

If you're a bit of a drama queen, then I have a wonderful treat for you.

Grab your popcorn, pull up a chair, and get ready to indulge.

Sometimes, the best drama is drama that has literally no effect on you whatsoever. For instance, here is some of the hot goss that's currently plaguing various niche hobby communities:

I'm in the Sims community, People are worried about the snow depth in the upcoming Expansion Pack, Seasons. –chimeranyx

I paint rocks. Another girl in my rock painting Facebook group gets her rocks shiny using a special resin, but she won't tell us what kind. –sm25bbbb

In the embroidery community, there was a big issue with one of the major Embroidery floss manufacturers (DMC) trying to take artists' work for free through a contest. Artists would submit their pattern to the contest and the winner would surrender the rights to the pattern and would receive no money from the company. Resulted in a bunch of artists sending in patterns that said "F*ck you" and "Pay Artists." –barltet4am3rica

A board game distributor literally disappeared with thousands of dollars' worth of games and income. The Malaysian equivalently to the FBI is involved. It’s big. –SharingIsCommunist I hope you're not a fan of Prismacolor colored pencils, or this next one is going to anger you.

Artists who use colored pencils:

Prismacolor pencils have dropped considerably in quality, to the point that they're no better than the cheapest brands. They're still the same price as always of course. You can look at the cores and see they're not even centered all the time. They're much more waxy too. –dis_ABLED

I'm a firebreather — have been for 20 years — and I belong to a small firebreathing troupe. The fuel we use for firebreathing normally costs us about $20-$25 per gallon. I found out last week that it may be available, under a different name, for $4 a gallon. If it's true (I'll be buying and testing the "new" fuel next week), it would easily save my small troupe several hundred dollars a year. –sirbeast

In the world of Lego, they are facing a lot of competition from Chinese companies like Lepin who flat out rip off everything from Lego. The design and artwork on the box look virtually identical to Lego, and it's as clear-cut an example of piracy and trademark infringement as you can get. It's such a blatant infringement it's ridiculous. The Lego set sells for $400. The Lepin set for $150. Lego has been suing them for a long time (as well as other Chinese knock-off companies) but not having much luck in shutting them down as Chinese courts aren't all that great at protecting IP. –agreeingstorm9

Not currently going on but there was drama in the Phish scene a while back affectionately know as tarp-gate. Fans were coming to shows early and putting down tarps to "reserve spots" for them, and their friends in GA sections and people were getting pretty heated. It was a big to-do at the time but has since died down. –Super_Digital Did you ever think people who crochet would be ripped apart by scandal? Read on to find out more.

My favorite Facebook crochet group is currently going through a lot of drama because the admins allowed someone to post a pattern of a penis-shaped pot holder. I've been so amused the last few days. –jujubee225

At Computex, Intel just unveiled a 28-core desktop (not server) processor that they had overclocked at 5GHz on all cores (with a full air conditioning unit cooling it). AMD announced that Threadripper gen 2 would have a 24 and 32 core option. No mention of clock speeds. But it looks like the beginning of a "core war" which is going to lead to ridiculous jumps in CPU core counts. True competition back in the CPU market — it's going to rapidly push CPUs to new heights, like back in the early 2000s! –kaldarash

This is a good drama. A sumo wrestler from Georgia, Tochinoshin, has just attained the 2nd highest rank of Ozeki. This is very rarely achieved, and he did it after coming back from a catastrophic knee injury that forced him to spend years fighting his way back to the top ranks. He's a fan favourite and has done it with phenomenal power sumo. His rise has been dramatic and exciting and has left the sumo world aglow. –GunPoison

In the Barbie/Fashion doll community, there have been Conservative women complaining because people have been posting pictures of their dolls supporting pride month. And all of a sudden, these women are shocked because they didn’t know that 99.9 percent of male doll collectors are gay men. –dqnx12

Beekeeping! Most keepers in my region lost more hives than usual this past year, due to a harsh winter and the upward trend of colony collapse. Surprisingly, hive numbers overall are up. This is good news as it seems we are getting a lot more noobs than usual. :) Use vinegar instead of heavy duty weed killers, please. –xcesiv_7 This next one is just straight-up ridiculous.

Cockygate. A lucrative erotica e-author tried to trademark the word "cocky" and was going after romance authors. Romance Writers of America hired a lawyer to contest that nonsense. –Terrawhiskey

There's this guy, let's call him "Bob" at the local farmers market that sells microgreens. This is a new fad, and he was getting great business. Words of his sales started reaching more traditional farmers — who now decided that they wanted a piece of his sweet watering hole. A few weekends ago one of them showed up selling microgreens slightly cheaper than "Bob." Well, Bob showed up undercutting the guy. Now they are fighting with each other for that niche market. Last weekend a 3rd player joined the game. Can't wait for this next weekend. –Suuperdad

A lot of rules changes in figure skating. The rules that everyone wanted to pass got rejected and the ones we didn't want to pass did. They made it much worse, no wonder why it doesn't have a lot of fans. –Lovitomato

Homebrew clubs are seeing a steady decline in membership and homebrew club events are becoming more sparsely attended. We're victims of our own success; the best homebrewers went pro and started making and selling the beer that everyone else, who isn't a homebrewer, now drinks and enjoys. The talent vacuum left behind a cadre of older brewers who have neither the knowledge or the inclination to reorganize and cater to a younger crowd. As well as young brewers whose free time is being sucked up by Facebook events and just plain going out and buying excellent beer instead of brewing it. –Nash_Rambler

I created a club in college that had a Facebook group. I hadn't thought about it in years but posted something the other day I thought they would get a kick out of. Well, some beazy who is the new president deleted my post. Of course, my immediate reaction was Biiiiiiiiiiiiiitch do you know who I am???? I MADE this club. And so I deleted her from the FB group. –criminy_crimini Share this with your friend who's always interested in the latest scuttlebutt! And let us know if there's any drama we should know about with your own hobbies!