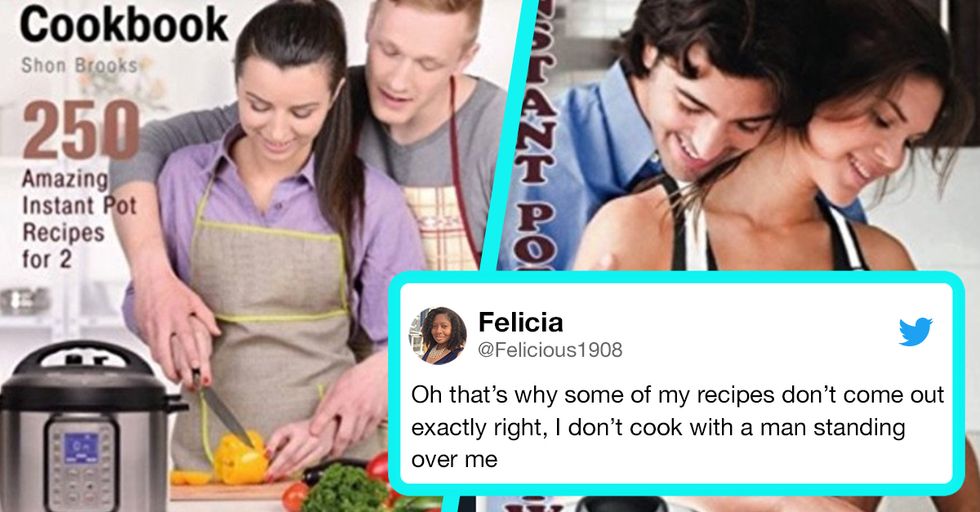 What's that? You don't need a man telling you how to cook? Well then explain these cookbook covers:

Veggies? Yep! Knife? You bet! And look! There he is again. A man showing a woman how to operate a knife.

OK, this is getting ridiculous. Where are all of these cookbooks coming from, and why do they have virtually identical bizarre cover layouts? Mike Rugnetta, creator of the Reasonably Sound podcast, first discovered these three unsettling cookbook covers and posted them on Twitter with the caption, "these poor women."

But it didn't stop there! Here's round two of cookbooks with basically the exact same cover:

Ah, yep. That'll do it. That explains a lot, actually. After Rugnetta made the original observation, the tweet quickly went viral as people began sharing their own hilarious interpretations of what's going on in these images...

Have you ever had a recipe just not work out?

@mikerugnetta Oh that’s why some of my recipes don’t come out exactly right, I don’t cook with a man standing over me
— Felicia (@Felicia)1516662554.0

If so, it's probably because you didn't have a man standing directly behind you with his hands on top of your hands. All the best chefs have hand men.

Also, what is this recipe?! Bread, cucumber, and a fancy pressure cooker? I'm not sure what's going to come out of that Instant Pot, but I can pretty much guarantee that it's not going to be good.
As it turns out, no one actually understands the Instant Pot. Everyone knows someone who swears by them, but no one can explain what they actually do.

Apparently, this phenomenon is not limited to photos on Instant Pot cookbooks:

It's stock photos in general! The plot thickens. This is clearly a mystery with roots deeper than I first realized. Now if I only had a man to show me how to figure it out...