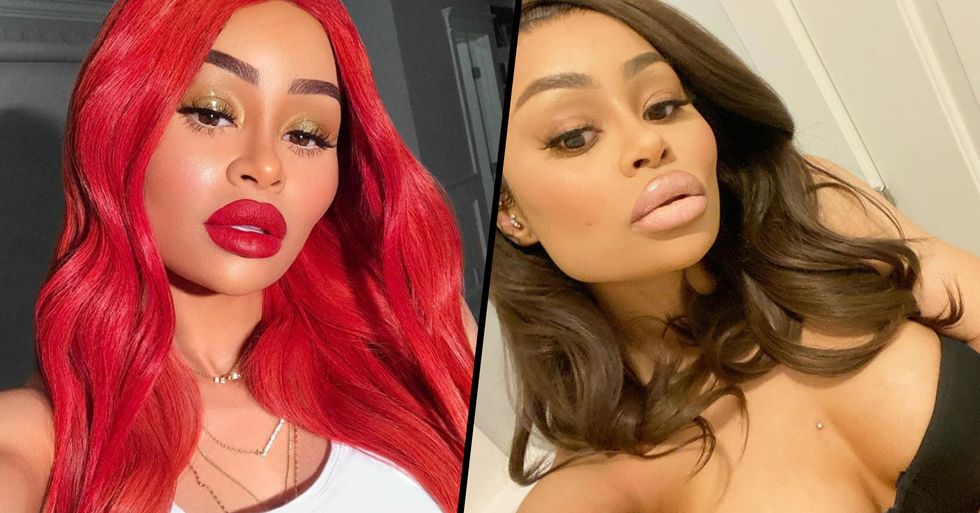 Everyone's slowly losing touch with reality during this uncertain time, but Blac Chyna might have taken things a little too far if she expects fans to do this...

The star has battled her fair share of controversies, but some fans came to her defense over this recent stunt, while others are clearly baffled.

Keep scrolling to find out what you could get out of this financial agreement and why Blac Chyna is resorting to this unusual approach...

Whether you like her or not, we all know Blac Chyna.

The reality star is used to the spotlight.

Chyna became a household name when she went public about dating Rob Kardashian back in January 2016.

But before that, she was just trying to make ends meet.

Chyna began stripping to pay for her college tuition, which she continued while she studied at Johnson Wales University in Miami, Florida.

It took a toll on her education.

She became too exhausted to attend classes, resulting in her dropping out after repeatedly falling asleep in class. She decided to focus instead on stripping and modeling.

In 2010 Drake named dropped her in his track Miss Me, which caused her popularity to skyrocket.

This lead to her modeling on the covers of Dimepiece, Straight Stuntin and Black Men's Magazine.

But it didn't stop there...

Later in the same year, she was cast as Nicki Minaj's stunt double in the song Monster by Kanye West.

Things were looking up when Chyna appeared in rapper Tyga's music video Rack City in 2011.

Shortly after, they began a relationship and had a son, King Cairo Stevenson together in 2012. Sadly the pair split in 2014 after rumors of Tyga and Kylie Jenner's relationship.

She went on to launch her online boutique 88fin in the same year, filled with products from her clothing line. In the same month, Chyna launched her own brand of adhesive eyelashes called Lashed by Blac Chyna.

She is a businesswoman through and through.

Blac Chyna is no stranger to controversy.

In 2016, after two years of constant feuds with Jenner over social media, she began dating Jenner's half-brother, Rob Kardashian. In November 2016 their daughter, Dream Renée Kardashian was born.

After just a month, the pair split.

After reconciling at first, Rob Kardashian went on to post sexually explicit pictures of Chyna, which resulted in her filing for a restraining order against him.

In 2018, a video surfaced of Chyna grabbing a pink stroller and swinging it around wildly during an alleged public altercation. She later said that it was in response to someone trying to touch her kids, saying she does "not condone violence," but would protect her children "at all cost."

Later that same year, she received beauty backlash for partnering with the brand Whitenicious.

Launching her own cream aimed at restoring the skin's "natural glow," with many branding it a  "skin-lightening bleaching cream."

Officers frequented Chyna's home earlier last year after she got into a brawl with her makeup artist.

She falsely claimed Chyna was drunk and endangering Dream Kardashian, but the LAPD confirmed this wasn't the case.

It's not the first time she's been involved with the police...

Last year, the cops were called to Chyna's suite at the Ritz-Carlton in Hawaii, after a fight broke out between the model and the rapper Kid Buu, who she was dating at the time.

Now Chyna has entered into something even more criminal...

She is advertising a paid FaceTime slot, and it's not cheap.

Turning to Twitter to voice their disgust, one wrote: "I’m finished. Imagine bailiffs turning up at your crib because you missed a payment for a FaceTime from Blac Chyna." While another said: "Imagine financing a facetime call w/ blac chyna."

Although not everyone was against the idea.

One fan wrote: "I’m going to text everyone in my contacts asking to buy me a FaceTime with blac chyna." While another said: "I’m finna use this stimulus check to FaceTime Blac Chyna."

Luckily, you don't have to use your stimulus check all in one go... you can pay in installments.

The reality star, 31, is charging fans $950 for a FaceTime call, according to her business website Lashed Cosmetics.

She doesn't indicate how long or when the FaceTime conversation will take place.

She just instructs fans to leave their phone number in the notes section when they check out.

If that small fortune is a little too much, you could always go for the cheaper option...

In addition to the illusive FaceTime call, Chyna is offering to follow back fans on Instagram for $250.

At least this one gives fans a time scale...

The instructions read: “Following back on IG add your user name in the address line. Please allow 24-48 hours for her to follow back. Thank you."

But not all hope is lost if you can't afford this exclusive offer...

Chyna's lawyer has spoken up about the star's latest move.

They said: “Blac Chyna is connecting more directly and creatively with her fans via FaceTime and Instagram follow backs during the pandemic! Like the true entrepreneur she is, Chyna is adapting to current realities and trying to bring more fun and joy to quarantine life."

Chyna's lawyer pulled on the heartstrings of her adoring fans, claiming she receives no financial support from Rob or Tyga.

“Chyna’s quarantine-related creativity is also born out of economic necessity, despite many false media reports to the contrary, Chyna receives no child support from either Rob Kardashian or Tyga for her two beautiful children, Dream Kardashian, and King Cairo Stevenson."

They continue by saying: “To make matters worse, Rob and his family have filed false accusations that Chyna is an unfit mother and are trying to take away Chyna’s custody of her precious daughter, Dream. Chyna will continue to fight these false claims in court to keep custody of Dream, especially after Dream was severely burned twice at Rob’s house."

Whether it's a new way of connecting with her fans, or just a means of paying her lawyers, it's definitely got people talking...

Her fans seem to be split over Chyna's new business venture, although she'll undoubtedly get some die-hard fans lining up. Check out some of the meanest things people have said about the Kardashians... looks like it's not just Chyna.