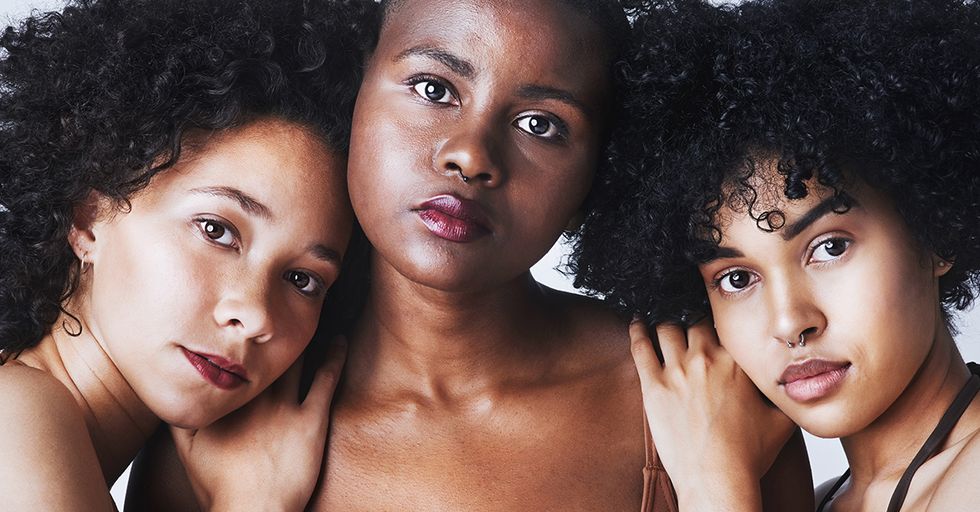 There are a lot of good things about the Internet.

For one, it's my primary source for adorable pictures of puppies and kittens, which is kind of my favorite thing ever. I lose count every day of the number of cute pictures and GIFs I share with my husband, and if I didn't have the Internet, I would be robbed of these supreme joy.

But the Internet is more than just adorable pictures. It's also an amazing tool for learning about the experiences of others and becoming more sympathetic human beings. Which is kind of what this whole "being human" thing is all about, right?

Recently, several black actors took to Twitter to share about the unequal treatment they receive from hair and makeup artists in Hollywood. Reading their comments was so eye-opening, and I wanted to share them with you, too. Maybe you'll relate, or maybe you'll simply have a glimpse of one of the ways society needs to improve in order to make the world a better place.

After arriving at hair and makeup to be styled for a show, Anakwe was treated pretty horribly by the hair stylists there. There was no one on staff who had experience with Afro-textured hair. Anakwe was finally styled by the lead nail stylist, who was taken away from doing her own job simply because whoever was running the show did a poor job of hiring the people they'd need. Teen Vogue wrote an awesome article about Anakwe's experience.

It didn't take long for black people in the entertainment industry to share their own experiences with unequal treatment.

This issue isn't just prevalent in modeling and fashion; it's also a huge problem in film, television, and stage acting.

@yahya @MatthewACherry One time I literally rolled out of bed and showed up to set and the hairstylist looked at my… https://t.co/AJDsesrbQP
— Asia Jackson (@Asia Jackson)1552254777.0

As someone who has basically zero talent when it comes to styling my own hair, I can only imagine how mortifying it must be to show up with bedhead and be told I had to appear onscreen as-is.

Often, black actors have to style themselves or pay for their own stylists to do the work.

Most Black actors get their hair cut or styled outside of set, often at their own expense because Hollywood hairsty… https://t.co/xPiZmNJDM8
— V3rbal (@V3rbal)1552240525.0

Which is insane if you stop to think about it. If you're white and you show up to a TV set, you can rest assured that after you're out of hair and makeup, you're going to look presentable for audiences. All too often, black actors can't rely on the people who were hired specifically to do hair and makeup to make them look camera ready.

Naturally, there are some stylists who do have experience with Afro-textured hair.

Don’t get me wrong there are White hairstylists who do both, but it’s not something producers usually think about u… https://t.co/IHMPqbEHvf
— V3rbal (@V3rbal)1552241751.0

But it seems like stylists having experience with Afro-textured hair is often considered a "perk" rather than a necessity when you have a diverse cast. I can only imagine the outrage if a black hairstylist refused to do white people's hair. Why do we allow white stylists to refuse black clients?

Soon, the #ActingWhileBlack hashtag started to pick up steam.

This mom shared that she notices the same thing when she brings her daughter in for hair and makeup.

Imagine how damaging it could be to show up ready to work and have hairstylists refuse to even touch your hair simply because they lack the necessary skills.

And when they do touch the hair, they manage to mess things up big time.

Working with Afro-textured hair requires skill and specific products. You can't just put whatever gunk you have on-hand in people's hair and hope for the best.

Yvette Nicole Brown pointed out that black actresses often come to set with all of their own stuff.

This is yet another thing that most white people don't have to do. Privilege in action.

@YNB Omigosh! Anytime hair and makeup is provided, I bring my own everything so I’m ready for the inevitable look o… https://t.co/eH9F7ETycm
— Melinda Doolittle (@Melinda Doolittle)1552330127.0

Obviously, working with Afro-textured hair takes skill. But first of all, those skills should be taught in every cosmetology school. Why is that not a requirement? How can we possibly allow stylists to completely ignore people simply because they have a certain type of hair?!

Secondly, it is 2019. Take a class. Watch a YouTube tutorial. Freakin' Google something. We have more opportunities than ever to learn this kind of information.

It is nuts that anyone should have to bring their own hair, makeup, and wardrobe with them to work.

Let's also not neglect to mention the fact that this is a huge added expense to black actors and models! Are they being compensated for the extra money they have to spend on hair and makeup products out of their own pocket? I doubt it.

You know what they say. The best-laid plans can always be ruined by some ignorant person trying to "fix" something.

This is actually pretty brilliant:

And while this is a funny way to deal with the situation, we can all agree that it's also totally whack that the situation exists in the first place, right?

Funnily enough, expecting to just "get it" doesn't work.

Which is why dealing with Afro-textured hair should be a part of every cosmetology school's curriculum. And if, as a producer, you're going to hire black actors, you need to make sure that the hair and makeup artists are actually qualified.

This made my blood boil:

It really sucks that this woman probably thought she was being super "woke" by saying this. In reality, she was just being bad at her job.

Here's another person talking about the added cost:

@YNB We deserve 4 paychecks for having to be our own hair, make-up, wardrobe stylists AND do original acting job we… https://t.co/XKkcx5r1QY
— Cherylyn/FabuNOLA (@Cherylyn/FabuNOLA)1552405823.0

Not to mention the fact that actors are dealing with all of this in addition to trying to put on a stellar performance. Talk about added pressure!

The same type of bias exists when it comes to the wardrobe department.

A muumuu/belt combo is a fine look... But it should not be the go-to look for every character who happens to not be a size 0. Come on, guys. It's not that hard.

And that's not the only issue when it comes to wardrobe...

@YNB #ActingWhileBlack I got fitted for a commercial and wardrobe handed me a shirt with a monkey on it to try on.… https://t.co/jvbLqysErS
— Darsan Solomon (@Darsan Solomon)1552341510.0

It's like, just think. For a second. For half of one second. Use the brain in your head.

And — surprise, surprise — makeup can also be a huge issue.

I don't care how much experience that makeup artist had. There is ZERO EXCUSE for making this beautiful woman look like she does in the far-right pictures. ZERO.

Sometimes, the makeup artist might try to pull the "you don't need it" card:

That's code for "You do need it, but I lack the skills to help you with it, so I'm just gonna lie to you instead."

If you're going on camera, you probably need makeup.

Studio lights and camera lenses are not forgiving to anyone. This is just another example of a makeup artist being unprepared and uneducated. And getting away with it.

If you don't carry a full range of foundations, you are messing up.

Unless the person has been cast as a ghost. In that case, you maybe get away with this microagression.

Because it's the Internet, someone felt the need to pipe up with this "brilliant" advice.

Rather than simply receiving equal treatment, this person thought it'd be a good idea for black people to educate others on what they need.

Luckily, this Twitter user was there to put a stop to this problematic thinking:

Just so we're all clear, it is not the job of marginalized people to educate others. Read a book. Or, once again, Google it. Google is your friend.

This is another acceptable response:

Props to the stylists out there who realize the onus is on them to educate themselves rather than trying to learn on the fly or simply use the wrong techniques and products in the hopes that they'll work for people they're not meant for.

I feel like the time they spend drawing out the word "cuuuuuuute" is directly proportional to how much they are lying.

@YNB the entire process is stressful. This is me stressing over my hair before an audition, before a callback (bec… https://t.co/I65lkBfvNg
— Liz Jenkins (@Liz Jenkins)1552320949.0

And if you've never had to think about it, well guess what? That's a great example of privilege.

So, what's the solution?

This issue can be attacked from several angles. First: Awareness. I am so grateful to the black actors who are speaking up and making it known that this is a problem! Second: We clearly need more black hair and makeup artists in the union! Third: All stylists need to be taught how to work with Afro-textured hair (as well as other physical traits that may not be prevalent in white people, like monolids and/or darker skin).

And before you go complaining about the people tweeting about this issue:

Yeah. Sure. Nobody is dying because of bad hair or makeup. But this is an issue, nonetheless. So it's important that people are talking about it. Share this with someone who might find this whole discussion totally eye-opening!