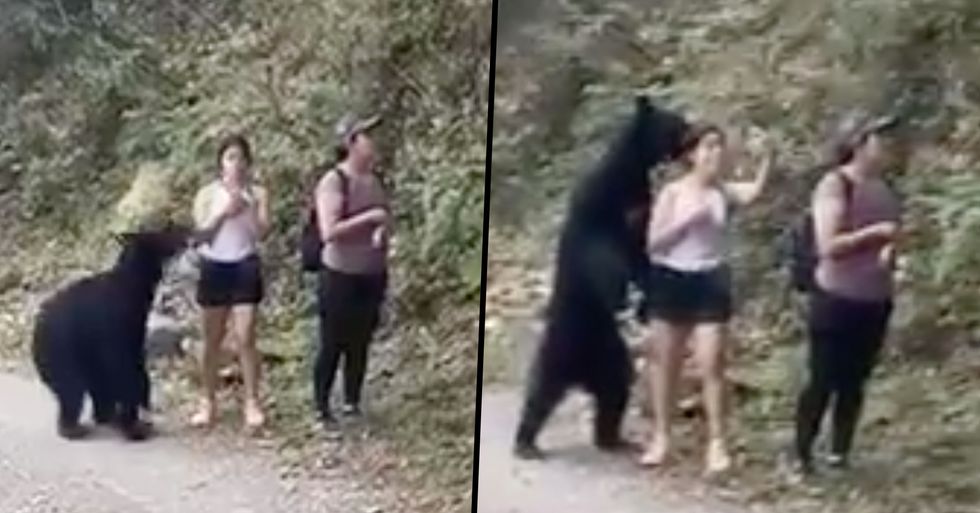 Shocking footage has emerged of a black bear approaching a group of hikers and they dealt with the situation in the best possible way...

Well, this was recently the reality for a group of hikers in Mexico, and they handled it in the best possible way.

Bears have a better sense of smell than dogs and they love humans' food.

Well, a group of tourists recently faced this nightmare...

But they handled it very impressively.

A group of hikers were recently out and about walking through Mexico's popular Chipinque Ecological Park in San Pedro Garza Garcia...

And they were suddenly joined by an unexpected visitor - a black bear.

And just as experts suggested, the women stood completely still as the bear made its way over to them to check them out.

The 3 women all remained extremely calm...

Which must have been unbelievably hard as at several points, the bear stood on his hind legs to give one of the women a good sniff.

The bear was particularly intrigued by one of the women...

And at one point, she tries to shuffle away and the bear playfully paws at her leg. Yikes.

It was utterly terrifying to watch...

And the tension is very much apparent as the hikers patiently wait for the bear to lose interest.

After around a minute, the bear starts to walk away...

And even though it looks back several times at the bewildered hikers, it just plods away and carries on with its day.

And it's safe to say that people were freaked out!

Many hikers came forward and could relate to the experience...

And it is undeniable how terrifying a bear experience must be.

The 3 women were praised on standing still throughout the ordeal...

As we all know that the moment you run from a bear, you have no chance.

And even more unbelievably...

A second video surfaced from another angle and it shows one of the hikers discreetly taking a selfie with the bear as it was stood behind her checking her out.

The hikers remain anonymous but hopefully, one of them will surface on social media soon to tell their side of the story.

Watch the terrifying video for yourself here.

For more bear content, keep on reading to learn about the conservation officer who was fired for refusing to shoot bear cubs...