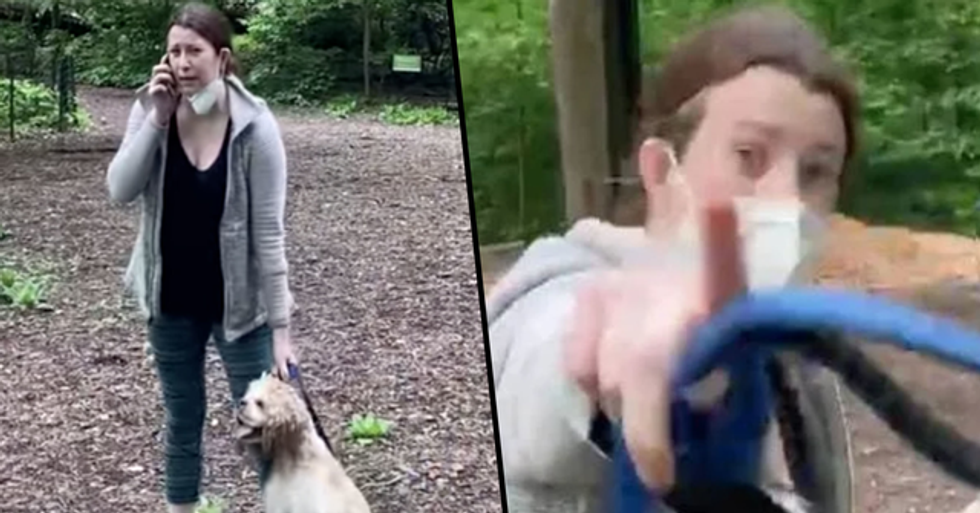 Yesterday, shocking footage showing a white woman calling the cops on an innocent black man went viral. Ever since, millions of people have been condemning the woman for her blatant racism, resulting in her losing her job.

But now, the man at the center of the scandal has spoken out about the viral treatment of the woman, and what he had to say has shocked everyone.

It's 2020, and racism is sadly still rife across our country.

Yesterday, footage from the infamous park emerged of a white woman calling the cops on a black man for the most ludicrous of reasons.

It is all over her dog being off its leash...

Melody Cooper took to Twitter to share the video of her brother, Christian Cooper, who was out bird watching at the time, being targetted by the aggravated woman after he had asked her to put her dog back on the leash. She captioned the video, "Oh when Karens take a walk with their dogs off-leash in the famous Bramble in NY’s Central Park, where it is clearly posted on signs that dogs MUST be leashed at all times, and someone like my brother (an avid birder) politely asks her to put her dog on the leash."

When the woman refused to leash her dog, Christian had offered the dog a treat.

But, instead of cooperating or simply walking away, the woman, who has since been identified as Amy Cooper, went on the defense. She grabbed her dog roughly by the collar and stormed towards Christian, asking him to stop recording her.

And, while still grabbing her struggling dog by its collar...

While standing further away with her dog continuing to struggle by her side, Amy goes on to talk to a 911 operator, saying confidently, "I'm sorry, I'm in the Bramble, and there's a man, an African American man, he's recording me and threatening me and my dog."

But many are wondering one thing...

What did Amy have to say for herself? Well, since the viral attention, she came forward with an apology. In a telephone interview with NBC New York, she said: "I sincerely and humbly apologize to everyone, especially to that man, his family. It was unacceptable and I humbly and fully apologize to everyone who’s seen that video, everyone that’s been offended… Everyone who thinks of me in lower light and I understand why they do."

She then spoke again to CNN.

She said: "I think I was just scared. When you're alone in the Bramble, you don't know what's happening. It's not excusable, it's not defensible."

But her efforts to backtrack on her disgraceful actions have been to no avail...

Because it was reported last night that Amy Cooper had been fired from her job at a top U.S. investment firm.

As soon as the incident went viral, Franklin Templeton, who employs Amy, instantly responded by launching an investigation.

The New York Post reported that she has been placed on administrative leave by the global investment firm that employs her.

But, shortly after launching the investigation, they decided to fully terminate her contract.

Following our internal review of the incident in Central Park yesterday, we have made the decision to terminate the… https://t.co/3GkCjsaYn7
— Franklin Templeton (@Franklin Templeton)1590517491.0

In a statement, they said: "Following our internal review of the incident in Central Park yesterday, we have made the decision to terminate the employee involved, effective immediately. We do not tolerate racism of any kind at Franklin Templeton."

Justice has been served, right?

Well, the victim of this whole scandal is reportedly not feeling too good about the consequences Amy has been forced to face.

Christian Cooper has now come forward about the treatment of Amy since the video went viral...

And he has revealed that it has all made him feel very "uncomfortable."

He doesn't believe that the backlash against Amy is helping with the problem of racism.

Speaking to the New York Times, Christian said: “It’s a little bit of a frenzy, and I am uncomfortable with that. If our goal is to change the underlying factors, I am not sure that this young woman having her life completely torn apart serves that goal."

You can watch the video for yourself here...

...which has now had over thirty-nine million views.

We hope some positive actions come out of this ordeal.

For more on the disgraceful racism in our country, keep scrolling to read about the heartbreaking story of George Floyd, who was suffocated by a white police officer kneeling on his neck...