Black Lives Matter Statue Taken Down After One Day | 22 Words 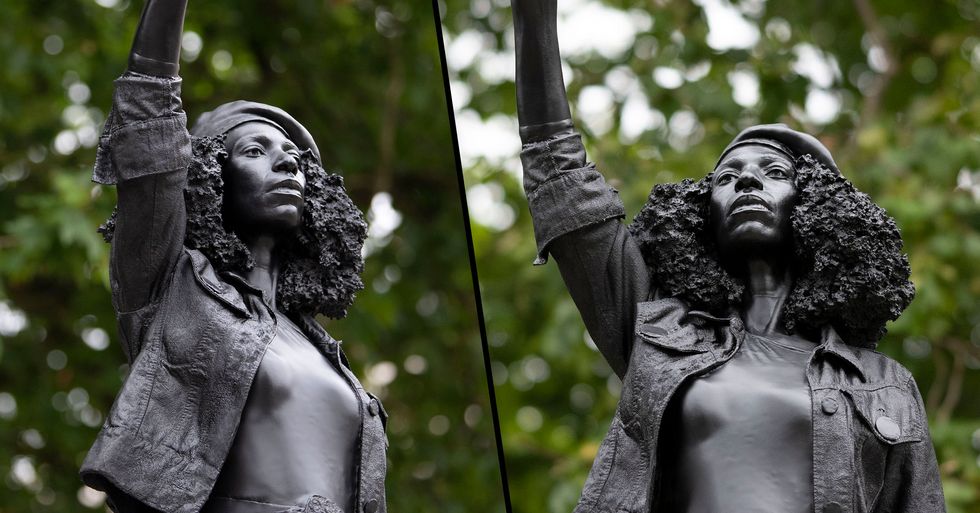 Black Lives Matter Statue Taken Down After One Day

The new Black Lives Matter statue that was erected in the place of a former slave trader has sadly been taken down after just one day...

The Black Lives Matter movement is more prominent than ever before.

People are finally taking a stand against the blatant racism occurring all over the world.

And one of the most popular methods of getting the message across?

Well, it's tearing down statues and monuments of historically racist figures, of course!

Tearing down the statues of slave traders and other controversial figures is the latest trend of 2020...

And boy, is it long overdue.

One of the first instances was the vandalism of a statue of former Prime Minister, Winston Churchill, in London, England.

Despite Churchill being celebrated for the role he played in carrying his country through World War Two, his history with racism is incredibly problematic, and he is credited for the death of millions of Kenyans and Indians.

And it didn't take long for the trend to reach the United States...

A statue of Christopher Columbus in Virginia was suddenly torn down and defaced - the monument was ninety-three years old and had been standing there to commemorate the Italian explorer.

Over in Portland, George Washington was then ripped from his stand and set on fire.

In images captured by Garrison Davis, you can see the old statue has been defaced and vandalized before being set on fire along with a burning flag. In the end, the statue was dragged into a lake and left there to sink.

The American Museum of Natural History then announced the removal of a prominent monument of theirs...

The statue of the former president, Theodore Roosevelt, who has been embroiled in controversy for decades.

The majority of people online have spoken in favor of this movement...

And many believe that all statues of anyone affiliated with slavery and racism in any form should be torn down permanently.

But now, the movement has been taken one step further...

A new statue has been erected in the place of a racist slave trader... And it is the most beautiful symbol of the entire BLM movement.

A video from Bristol, England, went viral earlier this year after protesters tore down a statue of 17th Century slave trader, Edward Colston...

Before throwing it into a nearby river.

Colston was a slave trader...

And he is thought to have trafficked as many as 84,000 African men, women, and children, with an estimated 19,000 dying on their journey to the Caribbean and America.

So, the vandalism of this statue was a long time coming...

And it has finally been replaced with something completely breathtaking.

A sculpture of BLM protester, Jen Reid, was erected early on Wednesday morning in Bristol's city center, directly where the Colston statue was pulled down last month.

Reid had been photographed standing on the empty plinth after the Colston statue was toppled during the march...

And the statue's artist, Marc Quinn, felt inspired to make a monument out of the powerful photograph.

He contacted Reid on social media and, together, they worked on moulding and erecting the statue.

As per the BBC, Quinn said on the project: "I saw pictures of Jen on the plinth and she spontaneously made this gesture and I thought this is amazing. She's made an extraordinary artwork just by doing that and it needs to be crystalized into an object and put back on to the plinth. It had to be in that public realm and I wanted to put it in that charged spot where Edward Colston had been before."

As for Reid, she has said that the sculpture was important because it helped "keep the journey towards racial justice and equality moving."

"This sculpture is about making a stand for my mother, for my daughter, for black people like me."

But this feeling of victory was short-lived...

As the statue has now been taken down by the local authorities.

And this is due to the fact that the statue was erected without planning permission by the local authorities.

It has been temporarily moved to the city's museum...

A spokesperson said, "It will be held at our museum for the artist to collect or donate to our collection."

Bristol's mayor, Marvin Rees, issued a statement about the removal of the statue.

"We have set out a process to manage our journey. We have established a history commission which will help us tell our full city history," he said. "As we learn this fuller history including the part played by black people, women, the working class, trade unions, and children among others, we will be in a better position to understand who we are, how we got here and who we wish to honor."

"Crucial to our heritage has been the harbor and the docks, manufacturing and industry, research and innovation, transport, slum clearances, housing, modern gentrification, and faith. As the commission shares this information, the city will decide on city memorials and the future of the plinth."

If planning permission is granted...

The statue will hopefully be erected again in the same spot... but it's safe to say that locals aren't impressed with this move.

People are saddened by the decision...

And it is such a shame to see the artist's hard work be dragged down.

Let's hope that planning permission will eventually be granted for this beautiful statue.

Keep on reading to find out about the vandal who splattered red paint over the Black Lives Matter mural outside of Trump Tower...