#BlackHogwarts Is the Viral 'Harry Potter' Thread You Didn't Know You Needed, but Absolutely Do | 22 Words 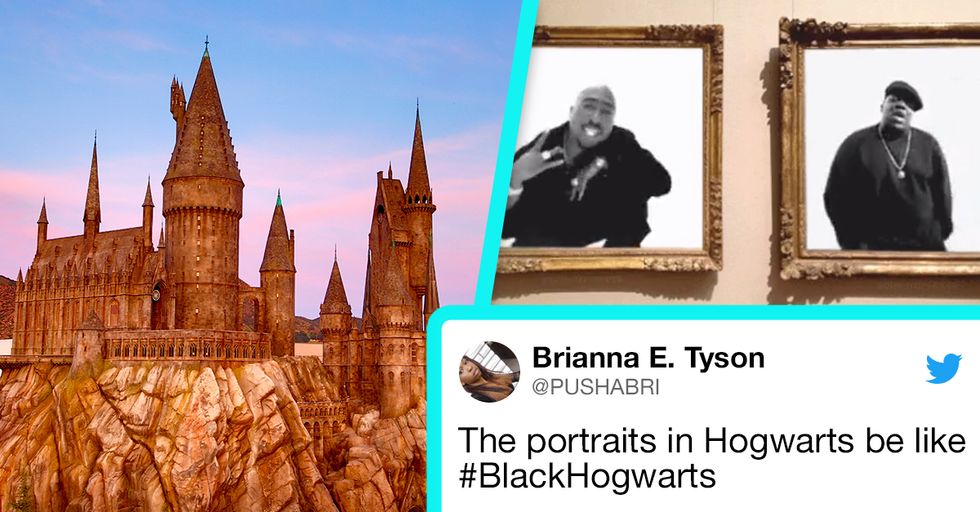 #BlackHogwarts Is the Viral 'Harry Potter' Thread You Didn't Know You Needed, but Absolutely Do

It's been 20 years since Harry Potter and the Sorcerer's Stone first came out, and ever since then, the series has cemented itself as one of the touchstones of popular culture. Generations of children have grown up reading the series focusing on the adventures of the boy wizard and his friends.

There's always been one big complaint about Harry Potter, however – it's not racially diverse. Except for that one black kid who always called out Quidditch matches, black Potter fans – like moi –  have been hard pressed to see themselves in the wizarding world.

Now, a new hashtag is changing that. It's called #BlackHogwarts and it reimagines what Hogwarts would be like if it were predominantly black.

When u black and been a harry potter fan since forever and wake up and see #BlackHogwarts trending pic.twitter.com/WsES80n9N7

For instance, how would your parents react if you broke your wand. You know they wouldn't just buy you a new one, right?

Me: I need a new wand. My old one broke.

Mom: You got new wand money? You better put some duct tape on and pray on that wand to work again. Me: #BlackHogwarts pic.twitter.com/F04CZaxlj8 — Nymph O. Brainiac (@nikkirojo4life) January 11, 2018

For that matter, EVERY time you made the slightest mistake at school, you'd just have to sit there, waiting for your mama to send you a howler.

?I don't care WHAT they doin at Hogwarts. You MY child! #BlackHogwarts pic.twitter.com/FPDw6LhgSx

And the sorting hat? Whole 'nother issue, because first you have to make sure your hair stays fly. No one likes sorting hat head. No one.

When you put your durag on so the sorting hat doesn’t mess up your waves. #BlackHogwarts pic.twitter.com/PTM1Xc0xfK

And what if the hat almost made a mistake? What if it *gasp* almost sorted you into Slytherin?

When the hat tries to put me in the house of Slytherin #BlackHogwarts pic.twitter.com/BHP0uj2cMB

But then again, you probably belong in slytherin. Why? Cause you're petty. You know it's true.

And the pictures on the halls wouldn't be of stuffy old ghosts, oh no. It would be Biggie and 2Pac, and also that one ghost that would confirm, definitively, that OJ did it. That's after he told you who killed Biggie and 2Pac first.

Mudblood, of course, would take on dangerous new meaning.

And Drake would be there to school you the minute you uttered it.

Being called a Mudblood in a roast session because you light skin #BlackHogwarts pic.twitter.com/y6m4aF2IQL

Even the school personnel would change. Hagrid would get a Rick Ross-is facelift, complete with jewels and luxurious furs.

The defense against dark arts teacher would have a newly glamorous look, and she'd always have an entourage.

And shade would be a dark art taught by the master of shade himself who would correct you, shadily, if you made the slightest fumble.

Me: "I thought this was Defense Against The Dark Arts.."

Even Sirius Black would have new swagger after he got out of Azkaban. No more skulking and moping around for him, oh no. He would be fly...

The Minister of Magic of course would be dope. He'd look like Obama, except with a newly expensive flair. Less everyone's favored uncle, more Prince at the height of his powers.

#BlackHogwarts When the Minister of Magic shows up for a visit. pic.twitter.com/5VXk4VunWJ

And then, of course, the houses would be different. Slytherin, for instance, would be more dangerous and glamorous.

Advanced transfiguration would be taught by Rupaul, who's been doing it for years and years.

Going to Platform 93/4 would be more of an event. Like a whole spectacle, actually.

Snoop of course would be professor of Herbology, as he's already been in real life for basically his entire life.

The reactions to every. single. drama. would be the most. The. Most.

When you catch the homie having secret meetings with Lord Voldemort #BlackHogwarts pic.twitter.com/t2pAaEzH2X

When Tom Riddle came up to the school saying he killed Harry Potter and he wake up in front of everybody #BlackHogwarts pic.twitter.com/slgKwCGTeb

When you hear the quiet slytherin say "Avada Ka...."#BlackHogwarts pic.twitter.com/b4zPRr2mVt

When you find out what that Parseltongue do #BlackHogwarts pic.twitter.com/qRVM2gK65x

There'd be more classes than ever. Some of them skirting legality.

Hello, I'm Professor Annalise Keating. This is Auror Law 101 or as I prefer to call it "How to Get Away With Magic" #BlackHogwarts pic.twitter.com/rKtLwacFw1

Gryfindor would be way more hype.

me joining my fellow Gryffindors after almost being sorted into Slytherin. #BlackHogwarts pic.twitter.com/ylNc4ztTAH

They would just do the most.

How girls be showing up to the first day of class after being sorted into Gryffindor #BlackHogwarts pic.twitter.com/8rCBd0AqIr

Going to Hogsmeade would be a bit more of a problem. Finances and all that.

Me: Can I go to Hogsmeade? Mom: You got Hogsmeade money? Me:#BlackHogwarts pic.twitter.com/XGeIVWmXnN

On the subject of finances, have you ever wondered what would happen if a student didn't have enough money for an owl? Well, #BlackHogwarts has you sorted.

When you on scholarship so you can't afford an owl #BlackHogwarts pic.twitter.com/ne16gsS8iL

And the Hufflepuff girls would continue to be masters of understatement.

#BlackHogwarts “Girl what you wearing to the Yule Ball?"

While the Ravenclaw girls would just be dreamy.

When Ravenclaw girls show out at the Yule Ball #BlackHogwarts pic.twitter.com/ws5XxNNQJ5

And of course, Dumbledore would finally get the burial he deserved in the style he deserved.

We made sure Dumbledore went out in style #BlackHogwarts pic.twitter.com/JHCAwz2XKg

Black Hogwarts. It's a thing.