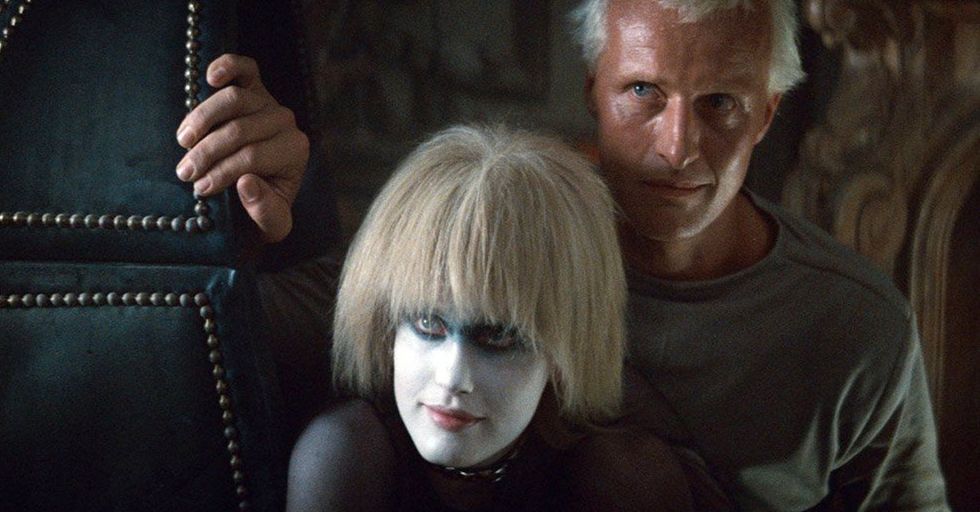 Did anyone else do a double take when reminded that the original Blade Runner, you know that movie set in a far-off dystopian future, was actually set in 2019? Yes, that’s right. 2019. As in basically, right now. We are officially old.

Ok, so the movie might have actually got a few things right when predicting the year 2019, but it also got a lot wrong. Today's LA is a long way away from the dilapidated streets in the movie that have been abandoned for life on other planets and are filled with flying police cars.

But as we move into 2019, it seems like the perfect time to find out how the predictions in Blade Runner actually compare to the modern day.

For starters we don’t have flying cars.

In the original Blade Runner, cops travel around in flying cars called Spinners. A landscape speckled with hovering cars looks pretty different from the modern city life. Technology has come a long way, with driverless car technology just around the corner, but it might still be a while before we take to the skies to get to work.

But drone technology could lead us there soon...

Although cars can’t fly yet, in 2019 we are used to seeing mechanical flying objects. Yes, drones. They can take our photos and help in search and rescue missions. Could the technology soon advance enough to transport us as well? Well it could actually be closer than you think. There are currently various companies researching and developing plans for flying cars using drone technology.

Fortunately, most of the fashion has not turned out as predicted.

The fashions of Blade Runner do not exactly scream modern day. It is pretty much '80s meets futuristic punk. Make-up maybe at an all-time high but Pris may have taken her smoky eye to a new level.

Although Dr Tyrell’s glasses are pretty on trend.

Glasses are getting bigger and bigger these days. Small frames are out and hipster geek chic is in. I wonder if Ridley Scott knew that out of all his movie characters it would be Dr. Tyrell who was on trend in 2019?

And now you mention it, Rachael’s fur coat.

Fur (or should I say faux fur), looks like it will be pretty on trend for 2019. But maybe lose the gun.

But shoulder pads have not made a comeback (thank god).

A lot of '80s fashion trends have come full circle — I’m talking high waisted skirts, cropped mom jeans, and ringer tees. Enormous comedy shoulder pads, I’m happy to say, are not one of those trends. Blade Runner definitely got this one wrong. I’m sorry Rachael, but we prefer our clothes to fit through doorways.

Our TVs have advanced a lot more than the movie predicted.

Today our TVs have huge flat screens, connect to Netflix, play the radio, have games, the internet  — you name it. Looks like Blade Runner was a bit behind with their predictions in that department, their small, boxy TV screens looking wildly dated.

Although, disappointingly, our hair dryers have developed nowhere near as much.

In the scene where Deckard meets Zhora, a snake-charming replicant we see her dry her hair inside a futuristic upside-down fishbowl style dryer. That’s one trend I wish we had in 2019.

So, we should probably talk about the fact that we don’t have humanoid robots called replicants.

Blade Runner’s society created robots called replicants that look, think, and act exactly like humans. Although we use technology and machines in many aspects of daily life, it seems the human shape has been deemed an unnecessary complication for robot building.

But weirdly we might not be far off … just ask Alexa!

So although we might not have made robot slaves that look like humans, we have developed robot ‘assistants’ that sound like humans. Alexa, the voice activated assistant in your echo, listens and responds to requests and controls various systems. She can answer questions, tell you the weather, turn on your music, and order you things online. If Decker falls in love with Rachael the replicant, could we soon be hearing Alexa love stories?

We have not colonized other planets.

Although the question of humanity moving to Mars has been widely discussed, in 2019, the answer is still no. In Blade Runner we see a society that has largely deserted earth for life on another planet after war and climate change. But although our planet might yet experience some of the same issues, it looks like we are stuck there for now.

But the movie worryingly echoes the real trends of global warming

I don’t think we see the sun throughout the whole of the movie and I’m pretty sure it rains in every scene. The implications about climate change project quite a bleak outcome for the Blade Runner version of 2019. Although in real life climate change doesn’t look quite as advanced as in the movie, an increase in natural disasters and bleak environmental predictions for the future make this portrayal hit concerningly close to home.

We have not quite killed off all the animals yet.

Blade Runner depicts a world in which almost all animals have died out, again with possible links to the environmental problems, industrialization, and war. Artificial animals now populate the world instead, created by special genetic designers.

Smoking is so not allowed inside.

Rachael lights up cigarette inside. *Audible gasp* from 2019 audience. The smoking ban has been around for so long that smoking in public places seems outlandish.

The movie seemed to predict a world with a severe lack of women.

The majority of characters left on Earth in the film are male. It reflects a society that seems quite far from ours.

And the female characters that were in this world were either exploited, poor, or replicants.

All the main female protagonists are replicants, not real humans. The other women we meet are half naked harassed entertainers, or poor ethnic workers. Definitely no females in positions of power. This is quite different to the current feminist currents in western society, especially post #metoo.

Although we have invented sex robots.

Pris, the replicant played by Daryl Hannah, is described in the movie as a "basic pleasure model." She was designed for the sexual pleasure of males. On this one, Blade Runner might have remarkably got it right. Sex robots, capable of having sex, responding, and even having conversations are actually on the shelves today.

Japanese influence didn’t overtake as much as predicted.

In the movie there was a heavy Japanese influence in the city. The movie makers obviously predicted that in 2019 Japan would have a big influence on the US. In actual fact Japan's influence declined and China rose up as the next global super power.

But the cultural merging in the cities is pretty accurate.

Different food, languages, and races. This prediction of a sort of cultural mixing has come true to an extent in big cities. Today the world is multicultural and we all adopt different aspects from each other.

Languages haven’t merged in the centre of big cities.

In the movie the cultural merging doesn’t end there. A new hybrid language has developed called Cityspeak. It merges Japanese, Spanish, German, Hungarian, Chinese and French. Edward James Olmos actually devised some Cityspeak for the movie.

Although in LA, Spanish is actually so prevalent that mixing could happen.

Although we haven’t seen a complete new hybrid language, in LA, and certain parts of the states, Spanish is extremely prevalent. For many it is a first language, and subsequently leads to others learning it. Perhaps a city Spanglish is not so far away.

Blade Runner hit the nail on the head with the huge flashing Coca Cola advertisement that we see throughout the movie. The themes of advertising and corporate influence seem just as relevant today. The multi-billion-dollar Coca Cola Company has remained as powerful as the film predicts. It is the world’s largest beverage company to date.

And digital advertising billboards are totally a thing.

If you walk in Piccadilly circus in London, Times Square in New York you will still be bombarded with big screen, digital advertisements on billboards. That look scarily similar to those in Blade Runner.

We have actually developed voice-controlled technology.

At one point we see Deckard sit using voice control technology to rewind and zoom on a video. That’s actually pretty up to date technology that is now common within the household.

Cops can still shoot people down.

Deckard’s mission is to "retire" (ahem, kill) those darn illegal replicants. Unfortunately, this is something we see in the news quite a bit today.

This Twitter user says we were already there in 2015.

This tweet from 2015 looks eerily like a shot from the movie. Dark, smog, skyscrapers and billboards. Did Blade Runners predictions already come true?

Some people are not convinced of the parallels.

To some of us Blade Runner is just a complete other world. It is fiction after all.

But perhaps 2019 will be our own dystopia?

Trump, Brexit, technology, climate change. Are we in a dystopia of our own and we just didn’t notice?

Some people are embracing replicant fashion for 2019.

In 2017 we saw the new version of Blade Runner released with Ryan Reynolds. This time the story was set in 2049. The question is, will they get their predictions right? We just have to wait another 30 years to find out.