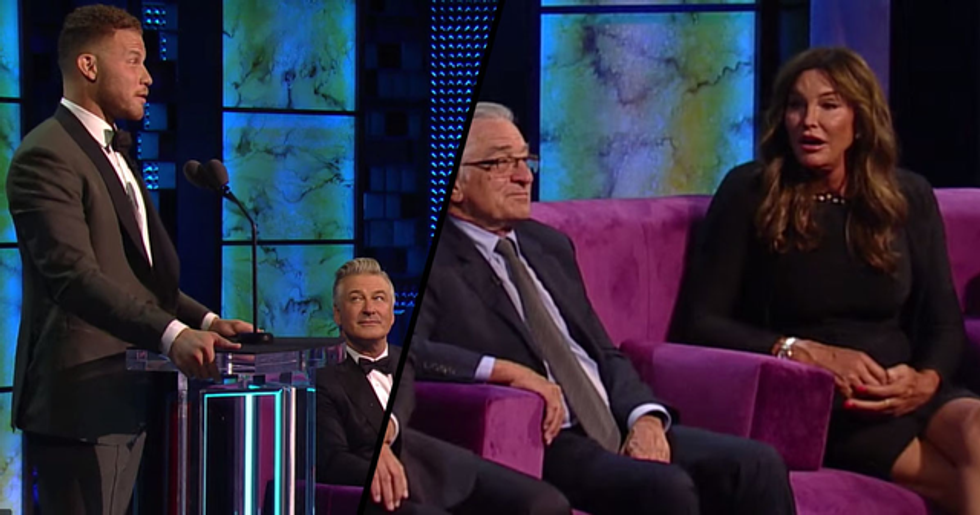 The Comedy Central Roast - It's the most wonderful time of the year, isn't it?

There's nothing quite as good as watching a load of celebrities get completely torn apart by a panel of comedians, but it gets even better when it's a Kardashian or a Jenner. Sorry, not sorry.

Alec Baldwin is the latest star (or victim?) of the Comedy Central Roast, though the panel seemed a little distracted by the presence of Caitlyn Jenner as a star guest. And Blake Griffin, Kendall Jenner's ex-boyfriend, appropriately directed a lot of his gags at Caitlyn. Much to the relief of Alec, I can imagine...

Anyway, things got awkward when Blake poked fun at Caitlyn's infamous gender transition by thanking her for "giving her daughter daddy issues." Yikes.

Keep scrolling to watch his full gag, and to see Caitlyn's frosty response to the crude joke.

And now, to add even more fuel to the fire...

Kendall's ex-boyfriend and NBA star, Blake Griffin, has decided to have his own little jibe at their damaged father-daughter relationship.

In the July of 2017, the NBA player broke up with his fiancée, and the mother of his kids, Brynn Cameron, and was swiftly spotted with Kendall shortly after.

They were spotted several times together.

But things began to sour when Brynn filed a child support lawsuit against Blake, in which she partially blamed Kendall for their split. Per court docs: “Griffin had no problem trading Brynn Cameron, his former fiancée and the mother of his two children, for reality television star Kendall Jenner...Griffin cared more about the glamour of dating a Hollywood celebrity than the day-to-day responsibilities of being a father and family man." Good lord. Following the messy lawsuit, their relationship came to an end when Blake moved to Detroit in 2018.

Yet, despite their relationship ending civilly last year...

Griffin just couldn't resist squeezing that Kardashian-Jenner flannel completely dry. During the Comedy Central Roast of Alec Baldwin, Griffin saw his opportunity and seized it... By taking to the podium to rip Caitlyn to shreds.

The one you're all here for, folks! He began by genuinely thanking Caitlyn for her bravery with her transition, and the doors she has opened for other trans people. So far, so good, right? However, he then went on to say: "On behalf of the entire NBA and half of the rappers on the Billboard charts, I want to thank you for giving your daughters their daddy issues."

Somebody pass Caitlyn the suncream, because she just got burnt.

Though be warned, it isn't for the faint of heart!

Yet, despite her brutal roast...

The roaster became the roastee! Caitlyn seems to be in good spirits about the whole thing, captioning her post on Instagram with "Had a wild weekend roasting @alecbaldwininsta - so fun!" Does this mean I can laugh at her embarrassment guilt-free? The full episode airs on September 15th, so make sure you watch it to see a Kardashian-Jenner get completely destroyed. It's one of the finer things in life, isn't it? For more Kardashian-Jenner content, keep scrolling!