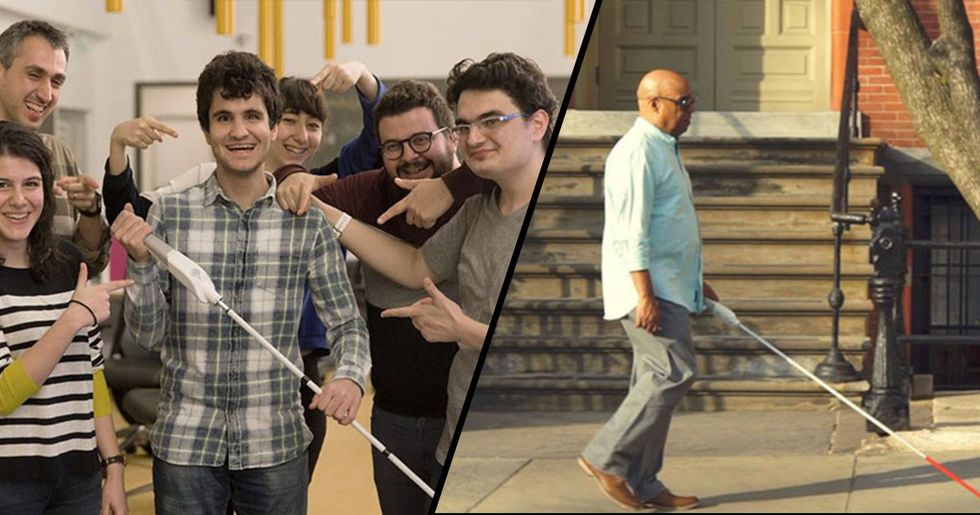 Sight is, for most of us, one of our most important and dependable senses.

Losing our vision is completely unimaginable to those with sight and the thought of doing day-to-day tasks being completely blind is horrifying.

But there are millions of people out there who live dependably while being completely blind. We humans are adaptable creatures, which means that people who have lost their vision halfway through their lives can learn to adapt to the hardest of circumstances.

Recent technology has brought us the Smart Cane that has been designed purely for the navigation of the blind. Keep scrolling to find out more...

Losing vision is a major change in someone's life...

People who are born blind adapt much more quickly to their disability, but those who lose their vision during their lives have a lot of adapting to do.

Being blind is considered to be a dismal fate by many...

INSIDER demonstrated that a survey found that a sample of Americans rated going blind as a worse fate than losing memory, speech, hearing, or a limb.

A loss of independence...

It was also found that the majority of respondents believed that going blinds leads to a complete loss of independence.

It is true that a lack of vision leads to limitations...

Tasks such as driving a car, riding a bike, applying makeup, or using computers are things that blind people either can't do at all or struggle to do without assistance.

But being blind doesn't mean a complete loss of independence...

The CCB (Colorado Center for the Blind) is a non-profit organization that is one of just 3 training programs of its kind in the country. It has a course called the Independence Training Center, designed specifically for blind adults wanting more independence in their lives.

People who are part of the CCB learn basic living skills...

These students learn how to cook, go shopping, read braille - the method of which blind people use to read - handle power tools, use smartphones, and travel the streets safely.

CCB encourage their residents to take part in outdoor activities...

Classes are taken out on trips to take part in activities such as whitewater rafting, skiing, and rock climbing.

Other senses can be relied on to do basic tasks...

Julie Deden, the CCB executive director said to INSIDER: "Blindness is one of the most feared disabilities of anything, because I think people feel like it takes vision to do most things." "But really, once people begin using their other senses, they realize you can easily do things without being able to see."

Walking sticks or canes are an important part of a blind person's day-to-day life...

But using a cane isn't as easy as it looks. CCB conduct "cane travel classes" that take place in the real world with large crowds and rushing traffic.

Learning to use a cane in public is a daunting experience...

CCB travel instructor, David Nietfeld, explained that a lot of the students struggle with the cane travel classes due to frustrations and a major lack of confidence. "A lot of people struggle with just having confidence that they can go and do things, so when they first learn how to cross the street, just believing that they can go out and go do it is a lot of times challenging for people."

A visually-impaired engineer recently decided that the classic walking cane could be better...

Kursat Ceylan is the CEO and founder of Young Guru Academy (YGA), which is a Turkish non-profit organization that has come up with a new concept named WeWALK.

The Smart Cane was invented with Ceylan's first-hand experiences of what it is like living as a blind person in mind. He decided to put his knowledge into something that would help greatly improve the lives of others who share his disability.

The smart cane is a device that is attached to a regular walking cane...

Using smart technology, the smart cane uses built-in speakers that users can listen to through headphones along with Voice Assistant and Google Maps that will help users navigate in a much more advanced manner.

An aim to fully support the visually impaired...

The smart cane also uses built-in sensors that alerts users with vibrations when obstacles above chest level present themselves. Together, these tools "support the visually impaired in their full participation into social life."

Speaking to CNN, Ceylan, who has been blind since birth, spoke of his ideas. "These days we are talking about flying cars, but these people have been using just a plain stick."

Ceylan has designed his product from his own personal experiences...

"As a blind person, when I am at the Metro station I don't know which is my exit ... I don't know which bus is approaching ... [or] which stores are around me. That kind of information can be provided with the WeWALK," he went on to say.

This is groundbreaking technology...

And it is a surprise that this already hasn't been thought of in the era of smartphones and luxurious technology for people with their sight intact.

The smart cane is on sale on the WeWALK website for $499.

Not everyone is impressed with the cost...

Bryan Matthews, a lecturer at the Institute for Transport Studies at the University of Leeds in England, shared his concerns about the cost with CNN by saying that there should be a focus on inclusive design.

However, the smart cane is an overall positive.

Anything that helps a visually impaired person navigate their surroundings is always a positive, and the smart cane has enhanced the mobility and transport of blind people by a staggering amount. It's truly incredible what technology can do, so keep scrolling to learn how a woman recreated 200 years of her ancestor's photos with modern-day technology...