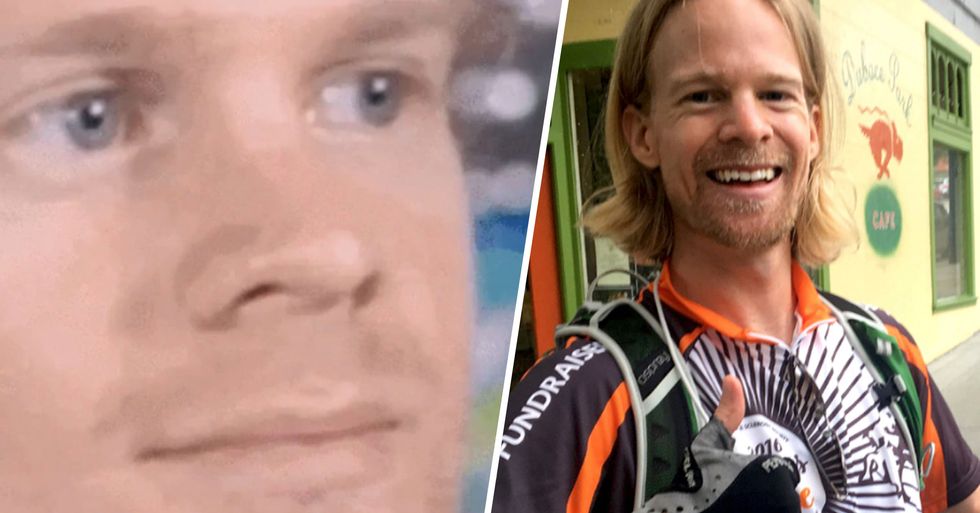 Ah, the power of the meme.

When someone becomes a meme, they are skyrocketed into the world's spotlight, and their legacy becomes engraved into the never-forgetting memory of the internet. It's a bizarre kind of fame, and some people use this opportunity to do a bit of good in the world.

We all know this meme - The blonde-haired, blue-eyed, slightly perplexed man who has been used as a reaction to funny tweets for the past couple of years. Well, his real name is Drew Scanlon, and he has been using his popularity to raise money for Multiple Sclerosis research. What a guy.

Keep scrolling to read Drew's story and the unlikely series of events that catapulted him to internet stardom.

The man behind the meme.

Yes, the people in memes are real people, folks, and the "Blinking White Guy" is no exception.

At the time of the creation of the meme in question (roughly around 2013), Drew was a video producer for Giant Bomb, a popular gaming website.

As a video producer, Drew was not only shooting and editing videos, but featuring in them himself.

So, he appeared on camera quite frequently. "Because we were a really small team, everyone was kind of on-camera all the time," he explained in a video.

Premium subscribers would be able to watch as the Giant Bomb team would "sit around and play a bunch of video games." This was where the famous meme we all know and love today was born.

Drew said that their reactions been turned into gifs wasn't uncommon.

"The Giant Bomb fans are amazing, and they're very passionate, so there were animated gifs been made of us constantly. So that part wasn't really new to me." He recalled how, when this would happen, the gif would usually be contained within the Giant Bomb community, and wouldn't gain too much attention.

How wrong he was.

Drew became a worldwide meme. The show in question was filmed back in 2013, and followed Drew and his colleagues as they played Starbound, a farming-style videogame. After one of the gamers made the comment, "I've been doing some farming with my hoe here," Drew rapidly blinked in a perplexed and confused kind of manner.

He marvelled at how his reaction was even spotted...

Because the show was a staggering 2 hours in length, and his reaction was a mere 2 seconds long. Some people have way too much time on their hands...

Though it did take a couple of years for the gif to become the viral sensation it is today.

"I think one of the weirdest things is that 4 years went by from when the video was shot to when the meme kind of reached its critical mass." It resurfaced in 2017 in the form of a viral tweet about a biology class.

The gif was eventually dubbed as the “Blinking White Guy," and started being used regularly as the punchline to funny and relatable tweets.

It has been used as a reaction gif to pretty much any topic.

Spending too much money, failing exams, burning in Hell... you name it, "Blinking White Guy" has been the face of it.

"It felt very much out of my control" he explained, "There was just something about the scale of it all that was a little alarming."

Though he was pleased that the meme has been enjoyed by so many people.

“I like what memes can do for people. They’re such fun, throwaway things I see," he explained in a different interview. "These memes have been generally positive. It’s not like I’ve had a say in what the internet does with a gif of my face. But I’m pleased to see people are enjoying it."

He quickly became a viral star.

And his fame even went as far as being invited onto Good Morning America to recreate those infamous blinks.

He's raising money for a cause close to his heart.

Drew is now using his internet fame for a great cause.

He is participating in "Bike MS"— a national bicycle ride that raises money to support Multiple Sclerosis research.

Drew has a personal connection to the cause...

It's Bike MS STREAM TIME! @VinnyCaravella is here and we're going to play some strange video games for a while. Joi… https://t.co/wP7sXLYSAc
— Drew Scanlon (@Drew Scanlon)1568664342.0

“I’m not usually one to toot my own meme horn but in this case, I’ll make an exception," Scanlon wrote on his Bike MS page. “You see, two close friends of mine and members of their families suffer from MS, a debilitating disease of the central nervous system that interrupts communication between the brain and the body."

He wants to use his meme to help raise money for the cause.

“If a fraction of those who have seen my goofy face donated to MS research, I have a feeling we could kick this thing in no time!" he explained.

Folks, we have raised over TWENTY THOUSAND DOLLARS so far!! Thank you SO MUCH to everyone who has contributed, this… https://t.co/y2BaAqdVAs
— Drew Scanlon (@Drew Scanlon)1569093142.0

People have used his meme to express their shock at people not donating. If you don't want to be that guy, you can donate here.

Maybe memes can be used to do some good after all.

Well, they certainly can be when they're based around a guy as wholesome as Drew Scanlon. Not had enough of meme stories yet? Not a problem. Keep scrolling to hear the scandalous backstory to the iconic "Unfaithful boyfriend" meme... it's hilarious.