20 Frightening Facts About the Scariest Locations on Earth | 22 Words 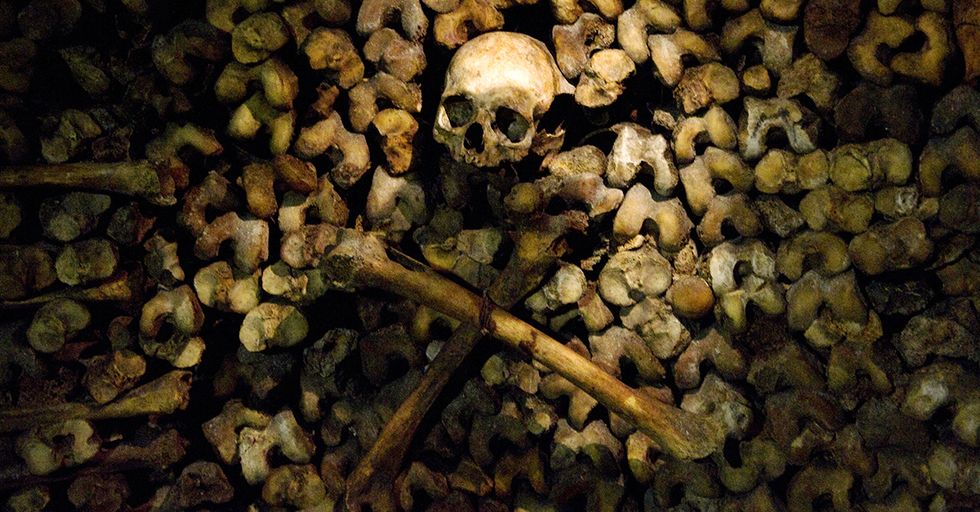 20 Frightening Facts About the Scariest Locations on Earth

Every country – heck, every town – has its scary places. That house everyone's afraid to go to. The town where everyone disappears once daylight comes.

The road no one ever finds their way off. Here are 20 facts about the scariest ones.

Called the "Sea of Trees," Japan's Aokigahara forest is purported to be a home to yurei, or Japanese ghosts. At least 100 people wander into the forest to commit suicide each year.

There's an island off the coast of Sao Paulo, Brazil called Snake Island that's home to extremely ferocious golden lancehead pit vipers.
Not only have they evolved to climb up trees and snatch birds out of the air, but their venom is also so strong it can dissolve flesh. Even worse, there are at least five of these beauties per yard on the Island. Nice.

3. The House That Winchester Built

Sarah Winchester, heir to the Winchester Rifle company, was a spiritualist who believed in ghosts and evil spirits. Even worse, she thought she was haunted, so she had her house continuously built with false doors, dead-end hallways, stairways to nowhere, and other traps to keep out the spirits of all the people Winchester rifles.

4. The vortex that eats helicopters

The long-abandoned Mir diamond mine in Mirny, Siberia is so deep that the air in its pit is warmed by the earth's core. When this warm air reaches the freezing cold Siberian air, the resulting vortex is powerful enough to suck down helicopters.

5. The most haunted village in the world

That title belongs to the tiny village of Pluckley, England, which is home to at least 15 regular ghosts and up to 40 visiting ones. Luckily, they're all friendly.

Have you heard that there are catacombs underneath Paris? They're filled with miles and miles of bones and aggressively spooky.

7. The cemetery that guards one of the gates of hell

Stull Cemetery in Stull, Texas, is so scary, it's widely thought to be one of the seven gates to hell. The original owner tried to clear the brush around it by burning it, but he ended up killing his son. Another man hung himself there. Not a place you want to get lost in at night.

8. The town filled with dolls

The tiny village of Nagoro, Japan has only 35 residents and 35o life-sized wooden dolls. Local artist Tsukimi Ayano made one for each resident that moved or passed away. Creepy.

The Golden Gate Bridge may be the symbol of San Francisco's success, but it has a darker meaning as well. Nearly 2,000 people have jumped to their death since the bridge was first opened in 1937.

That's what people call the tiny town of Centralia, Pennsylvania. Ever since a fire broke out in the coal mine underneath the city in 1962, it's been simmering constantly, forcing all but seven people to move from the town.

The Catatumbo River in Venezuela is home to a strange phenomenon. Lightning continuously strikes its edge 10 hours per day and up to 280 times per hour.
This is due to the constant mass of storm clouds just above the river. It changes in frequency, however, and once stopped from January to March 2010 due to drought.

The Cecil Hotel in Los Angeles has a long and horrific history of murder, suicide, and awful dealings. Oh, and the Night Stalker, Richard Ramirez, stayed there in the 1980s, as did Jack Unterweger, an Austrian serial killer who targeted sex workers.

Poveglia Island in Italy was used to quarantine those suffering from the plague in the 18th century. It was converted to a lunatic asylum in later years, and historians estimate over 100,000 people died on the island.

The space featured soundproof rooms, secret passages and a disorienting maze of hallways and staircases. The rooms were also outfitted with trapdoors over chutes that dropped Holmes’ unsuspecting victims to the building’s basement. The basement was a macabre facility of acid vats, pits of quicklime (often used on decaying corpses) and a crematorium, which the killer used to finish off his victims.

15. The bridge that kills dogs

The Overtoun Bridge in Milton, Scotland, is literally deadly to dogs. Something about the Bridge makes them jump to their deaths. Even worse, some dogs jump just to survive and jump again. Over 600 dogs have died.
Dogs aren't the only ones to die on the bridge. In October 1994, a man fatally threw his two-week-old off the bridge because he believed him to be the Devil. He then tried to kill himself by doing the same.

112 Ocean Avenue on the South Shore of Long Island, New York, is a very haunted space. On November 13, 1974, Ronald DeFeo Jr. shot and killed six family members, for which he was convicted of second-degree murder. In 1975, George and Kathy Lutz moved into the house with their three children, only to move out 28 days later because they felt they were being targeted by paranormal forces. Share this with a friend to spook them out!